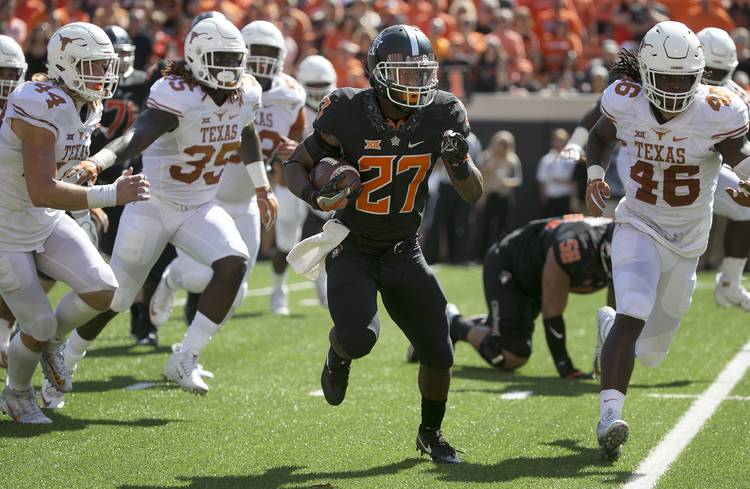 STILLWATER, Okla. — Texas coach Charlie Strong, who carved his reputation with defense, admitted he called some defensive plays during the Longhorns’ 49-31 loss to Oklahoma State on Saturday.

Texas even changed the starting lineup, thrusting Malcolm Roach and Breckyn Hager into the starting line. Brandon Jones and Kevin Vaccaro also started at safety instead of Jason Hall and Dylan Haines.

But little worked as multiple missed tackles and busted assignments led to another frustrating performance. The Cowboys took a ridiculously easy 14-0 lead and finished with 555 total yards.

“There’s no magical answer,” defensive coordinator Vance Bedford said in his first post-game press conference with reporters since September 2014. “We just gotta go out and play. I’ve got to do a better job of putting guys in position to play.”

Defensive end Breckyn Hager appeared to be on the verge of tears.

“We want to do well,” Hager said. “We know we’re Texas. It’s Texas and Oklahoma State. We know that. We’ve got to prove that … (sigh). We’re just underachieving.”

The Longhorns have only one takeaway in four games — a fumble against UTEP.

“When you play against these offenses, if you don’t get takeaways, you’re going to have a difficult time of winning ballgames,” Bedford said. “I’ve said that from the start, and I’m not going to deviate from that. And we didn’t get any.”

Meanwhile, the defense has allowed 153 points and counting, an average of 38.3 per game.

“One of the problems we’re facing is we’re not believing in what we do,” linebacker Malik Jefferson said. “Coach always comes back there and says, ‘You’ve got to believe in what your scheme is.’ A lot of guys didn’t pay attention. Lack of detail. This week, you have to turn the page. For myself personally, I have to step up and be a better leader.”

Asked to expand on his comments, Jefferson said, “I’m not saying we don’t believe in each other as a team. We go out there and have a lack of confidence when we play games.”

Hall may have lost his starting job, but he still finished with eight tackles and two sacks on safety blitzes. Linebacker Anthony Wheeler also had eight tackles, and Hager added six more.

But there were plenty of missed assignments and busted coverages. Jalen McCleskey had a 36-yard touchdown catch, then another one from 52 yards. The Cowboys were slowed in the second half, but that’s a relative term, according to Bedford. OSU tacked on 26- and 24-yard field goals to pad their lead late. Texas managed only six points in the second half.

OSU quarterback Mason Rudolph finished the day 19 of 28 for 392 yards and three touchdowns.