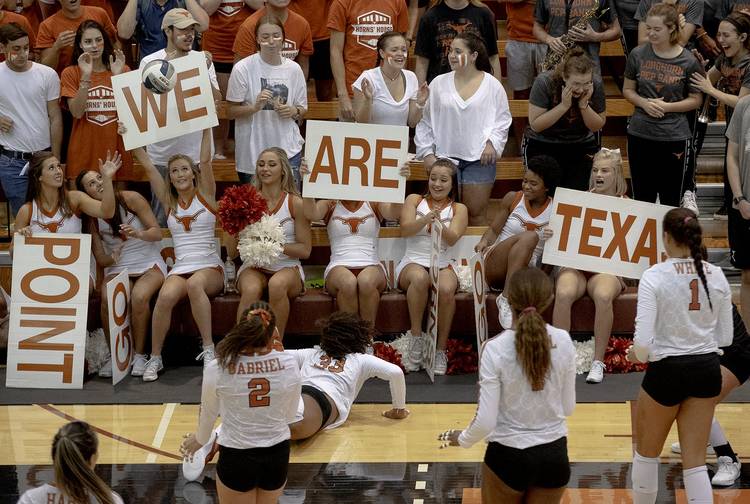 Texas cheerleaders react to an errant ball and a diving Logan Eggleston (33) during an NCAA volleyball game a match against Minnesota on Sept. 4, 2019 in Austin. [NICK WAGNER/AMERICAN-STATESMAN]

Texas volleyball has gotten used to that top-of-the-standings lifestyle in the Big 12 over recent years.

Since Nebraska left the conference ahead of the 2011 season, Texas has won as many conference championships as it has suffered conference losses — seven. In 134 Big 12 matches during that span, the Longhorns have won 80 of them in three-set sweeps. The last time Texas suffered three conference matches in a season was 2006.

So yes, Texas has been the baddest team on the Big 12 block for quite a while now. But a new bully has moved into the gym up the road. Baylor, ranked No. 1 in the country, is 16-0, the last undefeated team in the nation. No. 4-ranked Texas and the top-ranked Bears meet at Gregory Gym on Wednesday night. The match is already sold out.

“We have been waiting for this match ever since they were ranked No. 1,” sophomore hitter Logan Eggleston said. “We have a lot of history with this team.”

Baylor reached the No. 1 spot atop the AVCA poll for the first time in school history on Sept. 30. Since then, the Bears have swept five straight opponents. Baylor has beaten five ranked teams this year, including a four-set win in early September over Wisconsin, which is currently ranked No. 6.

Baylor’s Yossiana Pressley averages 5.74 kills per set, which is second-best in the country. Texas considered her to be a raw prospect when she was at Houston Cypress Falls and didn’t recruit her as part of its top-rated  2017 recruiting class that included the since-departed Lexi Sun. Longhorns coach Jerritt Elliott has previously said that Pressley is “showing that we made a mistake there.”

“We only have 12 scholarships. I wish I had more to offer more kids,” Elliott added this week. “She’s becoming a complete player that is one of the best outside hitters in the country.”

Texas (12-2), meanwhile, leads the country in hitting percentage (.328). The Longhorns ranked 65th in blocks but are coming off a 12.5-block match against West Virginia, a season high. Since its shocking loss at Rice on Sept. 18, Texas has dropped just one set in its last seven matches. The Longhorns have swept their last five Big 12 matches.

“I think it’s the perfect time to be playing Baylor because we are (reaching) our peak,” Eggleston said.

All-time, Texas is 83-2 against Baylor. The Bears haven’t won a match in this series since 2001. The last five-set match between the teams happened in 2006.

Baylor, though, has developed into more of a formidable foe under fifth-year coach Ryan McGuyre. The Bears were ranked in two of their last four matches against Texas. Last season, Baylor joined Texas as the Big 12’s only representatives in the NCAA tournament.

“To me, it’s great. Our conference needs this, it’s what it’s about,” Elliott said of Baylor’s rise. “I’m hoping that Ryan stays in the Big 12 for years to come because this is good.”