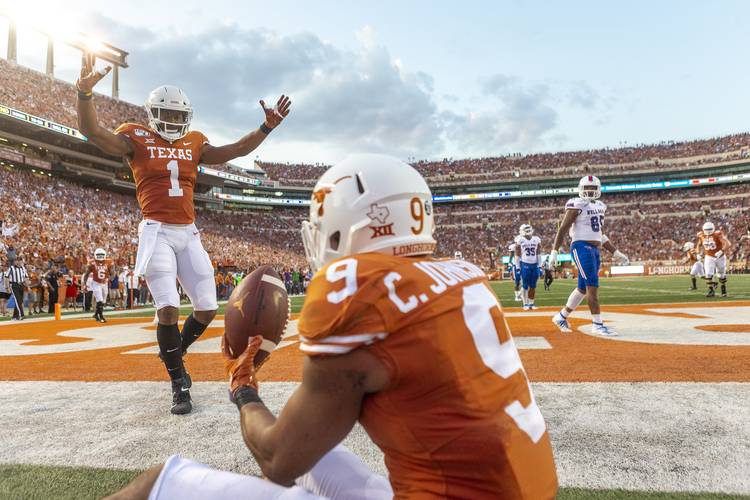 There were 153 snaps taken in Texas’ 45-14 win over Louisiana Tech on Saturday night. Here are five that ended up making a big difference:

1. Cashing in in the slot

On its first drive of the season, Texas marched 57 yards in seven plays. Senior receiver Devin Duvernay touched the football on five of those snaps. On the seventh play, Duvernay snagged a short bubble screen and was able to get into the end zone.

Duvernay ended the game with 55 yards and a career-high nine receptions. He also ran two times for four yards. Most of Duvernay’s damage was done on screens and short passes, but he did make a nice catch on a 22-yard toss from Sam Ehlinger. Ehlinger also missed him on a long pass in the third quarter.

Needing a replacement for leading receiver Lil’Jordan Humphrey, Texas moved Duvernay from “Z” receiver to the slot this fall. Texas senior Collin Johnson said after the game that Duvernay was initially skeptical of his new role. Johnson, though, assured his teammate that this was a “natural fit for you. Just keeping working hard, and I feel like everything will start clicking. Sure enough, tonight it did.”

Texas had a chance to score more points in the first quarter, but Johnson fumbled away the football at the Louisiana Tech 25 after converting a fourth-down catch. One of UT’s five captains, Johnson quickly made up for that mistake.

Texas doubled its score on the second quarter’s sixth snap as a scrambling Ehlinger found Johnson in the back of the end zone. Johnson was covered well by Louisiana Tech safety Bee Jay Williamson, but he was able to come down with the football.

That 6-yard catch was worth the most, but it wasn’t the most impressive of Johnson’s four catches on the evening. Near the end of the first half, an extended Johnson somehow kept a foot in bounds on the Louisiana Tech sidelines for a 27-yard catch.

3. Eagles to the end zone

Johnson’s touchdown catch was the 13th of his collegiate career. Three minutes later, one of his teammates would get to experience that feeling for the first time.

After Texas defensive lineman Jacoby Jones forced a Louisiana Tech fumble — the first of three turnovers for the Bulldogs — UT quickly took advantage of that mistake. On a second-and-6 play, Ehlinger connected with sophomore Brennan Eagles for a 28-yard score.

The touchdown was a first for Eagles, who caught one football during his freshman year. Eagles later hauled in another touchdown pass and exited the evening with three receptions and 59 receiving yards.

Trailing 24-0 at halftime, Louisiana Tech quickly marched out of its locker room and into Texas territory in the third quarter. On the first drive of the half, the Bulldogs reached the Texas 26. That drive, however, stalled on a fourth-and-1 play as Texas safety Chris Brown ran down fullback Bobby Holly on a short pass completion. Officials initially ruled that Holly had gained a first down, but that decision was reviewed and overturned.

On Louisiana Tech’s next possession, quarterback J’Mar Smith misfired on a fourth-and-5 at the Texas 39. For the evening, the Bulldogs were 1-for-3 on fourth-down attempts. Last season, opponents went 12-for-22 against a Texas team that ranked 78th nationally in fourth-down defense.

With Texas on its way to matching the second-biggest blowout of Herman’s tenure, Thompson played the entire fourth quarter. He picked up 25 yards on three of his five passes. He also ran twice, with the last of those being a 2-yard touchdown with 1:09 remaining.

Thompson’s TD run was set up by a 13-yard catch by freshman Roschon Johnson. Johnson opened the fall camp as UT’s third-string quarterback. He was recently converted into a running back after injuries depleted that position’s depth chart. According to Herman, Johnson battled a stomach virus on Friday. He recovered in time to run seven times and catch two passes in his collegiate debut.