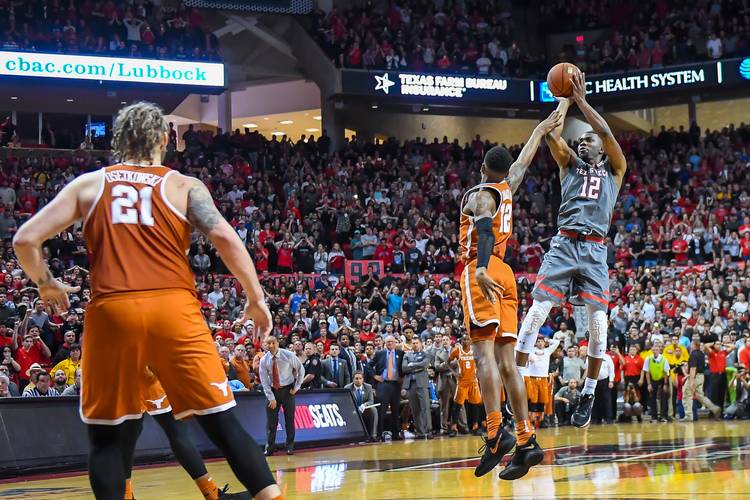 Keenan Evans #12 of the Texas Tech Red Raiders shoots the winning basket during the game against the Texas Longhorns on January 31, 2018 at United Supermarket Arena in Lubbock, Texas. Texas Tech defeated Texas 73-71 in overtime. (Photo by John Weast/Getty Images)

LUBBOCK — Wednesday’s wild night on the South Plains was one of those clip-and-save teachable lessons for every grade-school, middle or high school basketball athlete coming up through the ranks.

For every swished 3-pointer or in-your-face block, there are certain fundamentals that cannot be overlooked. It’s the stuff that won’t make the highlight shows. Making free throws probably ranks near the top of the list.

Texas turned in one of the gutsiest performances of the season at United Supermarkets Arena. Almost nothing went the Longhorns’ way. Mo Bamba battled through left knee pain. Dylan Osetkowski had a right ankle injury. Three players fouled out before overtime, and the Horns still dug themselves out of a 13-point, second-half hole.

But Texas Tech’s Keenan Evans was the one in position to hit the game-winner. He made 18 of 20 free throws — four of five in the last 49 seconds of regulation — and helped force overtime. Then, Evans hit a step-back 18-footer over Kerwin Roach II just as time expired in OT as 10th-ranked Tech captured a 73-71 win.

Social media will go gaga over Evans’ game-winner. It capped a stunning 38-point performance. But it was Evans’ performance at the line, and by contrast UT’s, that serves as the real lesson.

This was a game between the two worst free-throw shooting teams in the Big 12. The Longhorns (14-8, 4-5 Big 12) flew home knowing had they been just fractionally better, things would have turned out different. Texas was 13 for 26 at the stripe. Bamba was the only player with a clean sheet; he was 1 for 1.

Freshman Matt Coleman will draw most UT fans’ ire. With Texas leading 61-57, Coleman got Evans up into the air and drew a foul call. Coleman got three free throws, three shots that could have given UT a seven-point lead with 2:33 remaining. Coleman missed all three.

Seven seconds later, the Raiders (18-4, 6-3) ran a ball screen and Coleman was whistled for his fifth foul. Losing the team’s on-court quarterback looked like a psychological blow in which Texas would not recover.

“Matt’s a really good free throw shooter,” Smart said. “Not on that trip. But gotta find a way to win anyway, even when you miss.”

The five Horns on the floor came together, and it appeared that Bamba was ripping into Coleman. Evans hit two free throws, and Tech was within two as 15,098 nervous Nellies stood and roared.

Coleman went to the bench, and Roach took over at point guard. In the extra period, Roach hit a 3-pointer that got Texas back within two. Then, after Norense Odiase hit a free throw, Roach somehow banked in a 3-pointer with 13 seconds left.

In a tie game, Beard let Evans come down and simply make a play. “The final play, you can’t really say too much about it,” Roach said. “He’s a good player. He had 38. Made a tough shot against me. That’s it.”

Evans felt like it was good payback for his off night in Austin on Jan. 17. “So it felt like I paid them back,” Evans said.

After the shot, Beard shook Smart’s hands and went over to the Tech students and pleaded with them to stay in their seats. The school has already been fined $25,000 and reprimanded for a court-storming escapade after a win over West Virginia.

“Did you see Bamba?,” Beard said. “Shook every one of our players hands? Shook every coaches’ hand. Just unbelievable sportsmanship.”

These Longhorns aren’t into moral victories anymore, so the final totals won’t resonate with them. Roach finished with 20 points, Bamba and Coleman both had 12 and Eric Davis Jr. added 11 more. They’ll lament those 13 missed free throws, though.

Yes, fundamentals count. In close games, it makes the difference.

“Literally, nothing else could have gone wrong,” Bamba said. “Two of us get dinged up, two or three guys fouled out. We fought and we battled. We still had a shot.”