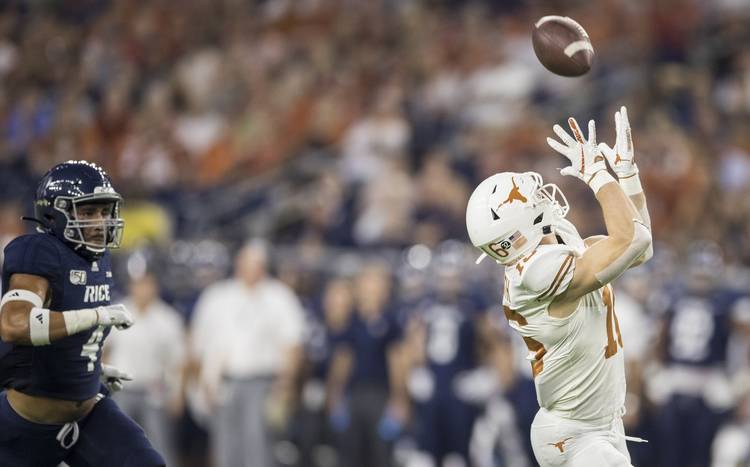 There were 124 snaps taken in Texas’ 48-13 win over Rice at NRG Stadium on Saturday night. Here are five that ended up making a big difference:

Tom Herman won his 32nd coin toss in five seasons as a head coach, but he elected to receive the opening kickoff for the first time. That decision helped Texas jump out to a quick lead as the Longhorns pieced together a 12-play touchdown drive after starting the game on their 18-yard line. Roschon Johnson’s 25-yard touchdown catch ended the possession, but it wasn’t the drive’s only key reception.

With senior Collin Johnson missing Saturday’s action because of a hamstring injury, Texas made Epps a first-time starter. He entered the game with two catches and 22 receiving yards on his résumé. On that opening drive, Epps turned two receptions into 27 yards.

Epps almost made another big play on UT’s next drive, but he had a 49-yard catch wiped out by a teammate’s penalty.  Five snaps later, Texas hit a home run that would stand.

On a first-down snap, Texas quarterback Sam Ehlinger found freshman Jake Smith for a 53-yard touchdown and a 14-0 lead. Smith’s vertical route past Rice safety Prudy Calderon gave the Longhorns a catch of at least 50 yards for the second straight game. Last week against LSU, sophomore Brennan Eagles scored on a 55-yard reception. During the 2018 season, Texas and Central Michigan were the only offenses that did not record a 50-yard play.

Smith, a four-star recruit from Arizona, added a 12-yard touchdown in the second quarter. He finished the evening with six catches and 75 receiving yards.

Pitch and catch between Ehlinger and Smith. Texas with a four-verts concept here. (CBSSN) pic.twitter.com/EXcamykwFu

Texas went onto tally 31 points in the first half. UT’s third touchdown was a 26-yard run by Keaontay Ingram, who scored with his offense facing a fourth-and-3. Texas hurried to the line after an incomplete pass by Ehlinger, and Ingram sprinted through a hole created on the right side of his offensive line and fought off an Owl at the goal line.

Said Ingram: “We were just trying to get the first down. Anything after that, that’s gravy to us.”

The touchdown run had three interesting components to it:

Ingram also had a 14-yard touchdown run in the third quarter. He finished his first multi-touchdown performance with a game-high 74 yards. He carried the football 13 times.

Texas didn’t force any turnovers on Saturday. Jalen Green had a touchdown on an apparent fumble return overturned by a review, and fellow cornerback Kobe Boyce misplayed a potential interception that could have been returned for points. That left a sack as the biggest highlight for UT’s defense.

The Longhorns were already coasting to a victory at the end of the the third quarter when Rice drove to the Texas 29. After an incomplete pass and the stuffing of an Owl at the line of scrimmage, Texas linebackers Ayodele Adeoye and Jeffrey McCulloch ran down Rice quarterback Tom Stewart in the backfield.

The sack forced a punt by Rice, which was trailing 38-0. UT’s shutout remained intact until the 7:50 mark of the fourth quarter.

Playing just five miles from his high school, former Houston Lamar standout D’Shawn Jamison recorded three tackles as a backup cornerback. His night, though, will be remembered more for a 98-yard kickoff return in the game’s final minute. The touchdown was the first score by a Longhorn on a kickoff since the 2012 season.

It was the second touchdown of Jamison’s career. He had a 90-yard punt return against Kansas State last season. A sophomore, Jamison has recorded four career tackles, and he started once as a slot receiver during his time at Texas.