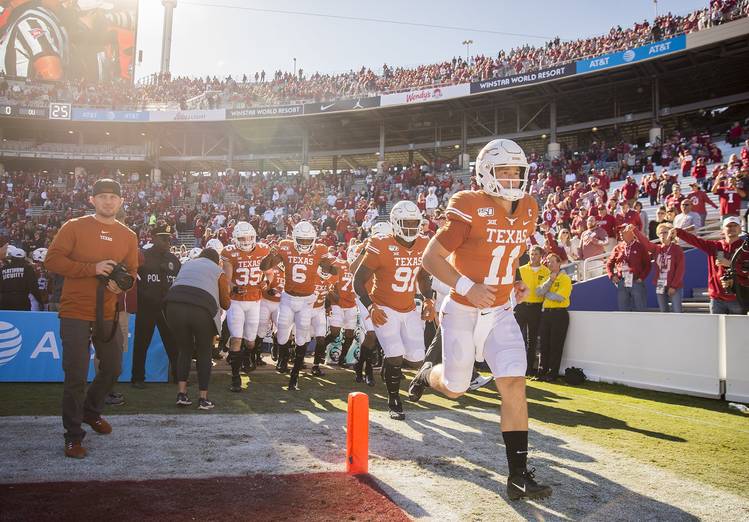 Texas Longhorns quarterback Sam Ehlinger (11) leads the the team onto the field during pre-game during an NCAA college football game against OU at the Cotton Bowl on Saturday, Oct. 12, 2019, in Dallas, Texas. RICARDO B. BRAZZIELL / AMERICAN-STATESMAN

Sam Ehlinger was asked Tuesday why the Texas running game never got on track against Oklahoma.

OK, Joseph Ossai, how did the Longhorns miss so many tackles against the Sooners?

“We watched the film and we learn from our mistakes, and we’re happy to move forward, looking into Kansas,” the linebacker said.

Zach Shackelford, what about those nine sacks?

“We all know what happened Saturday,” the senior center said. “And it wasn’t the result that we wanted. But you know we can’t do anything about now.”

Few wanted to talk about this week’s matchup against Kansas (2-3, 0-3 Big 12). Cut Texas fans some slack if they don’t show up with the same gusto Saturday night at Royal-Memorial Stadium.

Heck, if nothing else, come see Prince’s former band The Revolution for the pre-game concert and party like it’s 1999. Or, maybe 2009. That was a better year for the Horns, anyway.

The 15th-ranked Longhorns (4-2, 2-1) have a clear road map back to the Big 12 championship and a possible rematch with those same Sooners. It’s not a care-free journey. In fact, it’s fraught with peril, especially on the road:

The Longhorns are 15-3 all-time against the Jayhawks. The losses came in 1901, 1938 and, of course, 2016. Other than those generational disasters, it’s been smooth sailing on the gridiron. Don’t ask how things are going on the hardwood.

“I just thought the initial hire was the best hire,” Miles said this week. “l felt like there needed to be change. Les did a strong job. He worked hard. We just needed a change. And change philosophically as I saw it.”

Coach Gary Patterson’s club may have lost to Shane Buechele and the SMU Mustangs, but taking this team lightly is a mistake. TCU has dominated Texas this decade, going 5-2 over UT since the series resumed in 2012.

First-year coach Chris Klieman turned heads with a 3-0 start and a win over Mississippi State. K-State then ran into an angry Oklahoma State squad coming off a loss to Texas. Then came a 31-12 loss to Baylor, which is still undefeated. Defensively, the Wildcats are allowing just 19 points per game and opponents are converting just 20.8% of their third-down attempts. Defensive football always sells in Manhattan, Kan.

The Cyclones, who were the preseason media darlings, have been up and down thus far and don’t look as dangerous as once perceived. That was after close losses to No. 19 Iowa and Baylor. But coach Matt Campbell’s club has found its footing with two Big 12 wins.

The most dangerous aspect about this game is the venue itself in mid-November. It’s likely to be a psychological battle for the Horns with the weather. The cold Halloween night game in 2015 was a nightmare. Texas didn’t cross the Iowa State 47-yard line until the third quarter.

Is it possible that this becomes a Big 12 championship game semifinal matchup? The Bears certainly hope to stay undefeated and remain in the driver’s seat. Quarterback Charlie Brewer has thrown 11 touchdowns and only three interceptions. The Bears left Austin last year knowing they were every bit as good as the Horns. This game in Waco may be a monumental moment for Herman and Baylor coach Matt Rhule.

Uninterested observers have to feel for the Red Raiders and what happened to them last week against Baylor. Their fans spent this week blasting the Big 12 office for a poor officiating decision that cost them a win.

Maybe if this game were in Lubbock, a late-season matchup would be dicey. Not at Royal-Memorial Stadium, though. If the Horns have gotten this far with only one conference loss, they can close it out against the Raiders and punch a ticket to Arlington.

Maybe all of this is premature. If Texas can’t figure out its tackling issues and pass defense, the Longhorns will absolutely stumble in the back half of the season. Ehlinger can do only so much.

And there’s only so much the coaches and players can do about what happened last week, too.

Texas could help itself by getting off to better starts. The Horns have only 28 first-quarter points all season. Opponents have only scored 20. But landing the first punch and knocking the opponent back on its heels is a clear advantage.

It’s why Herman went for it twice on fourth-and-goal early against LSU. Neither play worked, but Herman was trying to deliver a message.

“Yeah, that’s a good question,” offensive coordinator Tim Beck said. “We’ve talked about that a little bit. I don’t know if it’s something that the guys are waiting for somebody to make a play. Then, all of a sudden it’s like, ‘Hey, let’s go.’ I’m not sure why that’s happened.”

Give Kansas, or any double-digit underdog for that matter, a chance to hang around and bad things happen.

Texas has a clear directive: Win six games and get back to Arlington. Might as well get off to a good start Saturday against the Jayhawks.