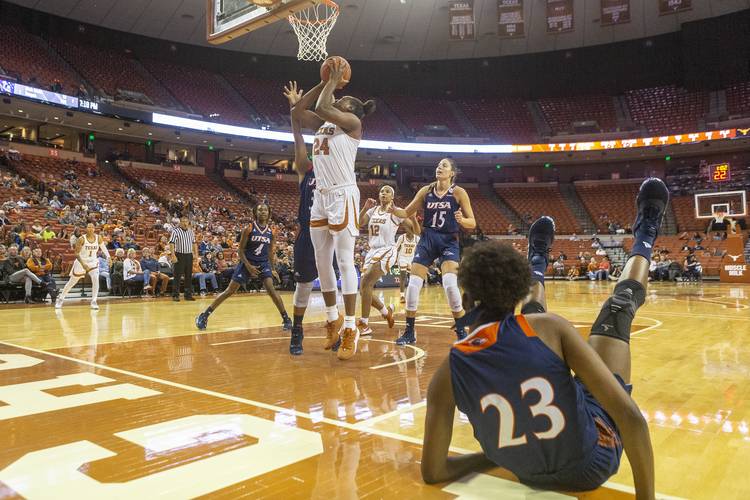 On Thursday night at the Erwin Center, Charli Collier and Joyner Holmes helped Texas literally rebound from a season-opening loss.

Texas controlled both the paint and the third quarter in an 84-53 victory over UTSA. With the victory, the Longhorns evened their record at 1-1. This past Friday, Texas had dropped a 64-57 decision at South Florida in its first game of the 2019-20 campaign.

Ranked 22nd in the AP poll, Texas will next host Arizona on Sunday afternoon.

“Coming off that loss, this is definitely a confidence booster for us,” Collier said. “Being able to get this win under our belt, we’ll get ready for practice and get ready for Sunday.”

Texas muddled through a first half that featured nine turnovers and a UTSA lead that swelled to nine points. The Longhorns ended the second quarter on a 9-0 run. That late spurt created a 35-29 lead for Texas at halftime.

Texas scored 16 of the second half’s first 21 points, and a lay-up by Sug Sutton gave the Longhorns a 51-34 lead. Texas went onto score 27 points in the third quarter. UTSA, meanwhile, had more turnovers (five) than field goals (four) during the 10-minute quarter and found itself facing a 62-41 deficit at the buzzer.

UT senior guard Lashann Higgs said the message in the locker room at halftime was more about defense than offense. Karen Aston, the team’s eighth-year  coach, switched to a zone at the start of the third quarter. UTSA coach Kristen Holt credited that switch for taking the Roadrunners out of their offensive rhythm.

“I thought that was probably a good call on her part,” Holt said.

Aston is admittedly “not a huge fan of zone defenses.” Such a defensive scheme will be necessary at times this season, though, because of the UT’s depth. Texas has only 11 eligible players on its roster. One of those players — sophomore guard Audrey Warren — is currently out with a concussion.

“I do know that there will be times just because of our depth — or lack of — that we have to implement that (zone defense),” Aston said. “I thought it was a good time to work on it.”

Six days after it went 1-for-9 on its three-point shooting, Texas didn’t fare much better from beyond the arch. The Longhorns tried 18 three-pointers against the Roadrunners. Only three of those shots fell.

With those long-distance attempts not connecting, Texas instead did its best work near the basket. As a team, Texas scored 56 points in the paint. UTSA did not play a player taller than 6-1 and scored only 20 points in the same area.

A 6-5 sophomore, Collier scored 28 points on Thursday and exceeded her top-Texas total by 13 points. Collier, who was limited in the first half by two early fouls, also snagged a career-high 12 rebounds. Eight of Collier’s rebounds were offensive.

Not to be overshadowed, Holmes was responsible for 17 points and 10 rebounds. The 6-3 Holmes also distributed a team-high five assists.

“The high-low was there a lot of the time,” Collier said. “Definitely had an advantage and we took advantage of that.”

Both Collier and Holmes also recorded double doubles in UT’s season opener. On only one occasion last season did two Longhorns record double-digit points and rebounds during the same game.