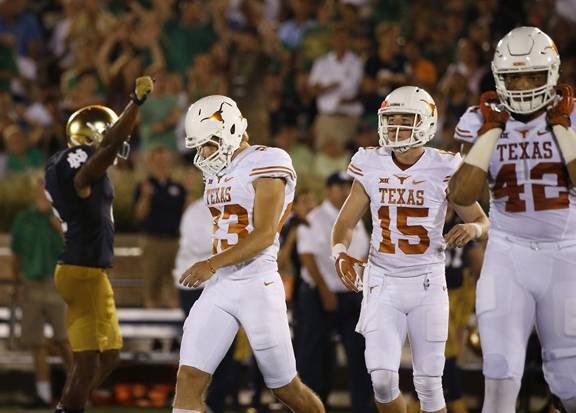 SEPTEMBER 5, 2015 - Texas #23 Nick Rose walks off the field after missing the third attempt for a field goal . He made the first two but they did not count. Notre Dame Stadium in South Bend, Ind., on Saturday, September 5, 2015. (RODOLFO GONZALEZ / AMERICAN-STATESMAN)

Notre Dame scored on two of its first three possessions and it might have been three out of three, if not for a false start on the Irish near midfield that resulted in an Irish punt.

True freshman Malik Jefferson started at linebacker and was outstanding. He made six tackles in the first half alone. He was quick in pursuit, he played with an edge, and he was very, very active. He finished with nine tackles, including 2.5 for loss.

Neither left tackle Connor Williams nor right guard Patrick Vahe distinguished himself. The two freshmen linemen were no match for a salty Notre Dame front that absolutely mauled the Longhorns line. So much for an improved line.

Texas didn’t screw it up. Yes, defensive tackle Tank Jackson was one of the three captains, but cornerback Duke Thomas made the call of heads, and the Longhorns chose to defer until the second half. Phew. So far, so good.

Texas' offense looking about as useful as my last 4 rounds….

Notre Dame is shelling out $500 million to renovate the stadium, the biggest project in school history. It’s moving the press box to the east side (and reducing the size from 350 seats to 175 or fewer), widening the lower-bowl seats from 16 to 18 inches and adding classrooms for subjects like music and sacred music. The job will be done in two years.

Even though he had thrown a pass in only two games in his career and made just one start, Notre Dame sophomore quarterback Malik Zaire looked poised and sure of himself as he directed the Irish to a 17-0 lead in the first half. The left-hander (the first to ever start at ND) completed 19 of 22 passes for 313 yards and three touchdowns.

(At least before the game). Texas head coach Charlie Strong spent four seasons as a Notre Dame assistant. He saw a few old friends at the stadium and posed for pictures with a few including Irish fixture, retired home-builder Jack Hickey, a benefactor who built homes for dozens of Irish coaches.

Notre Dame honored its 1970 football team, which beat Texas in the Cotton Bowl to snap the Longhorns’ longest-ever win streak at 30 games. About three dozen players showed up on this reunion weekend.