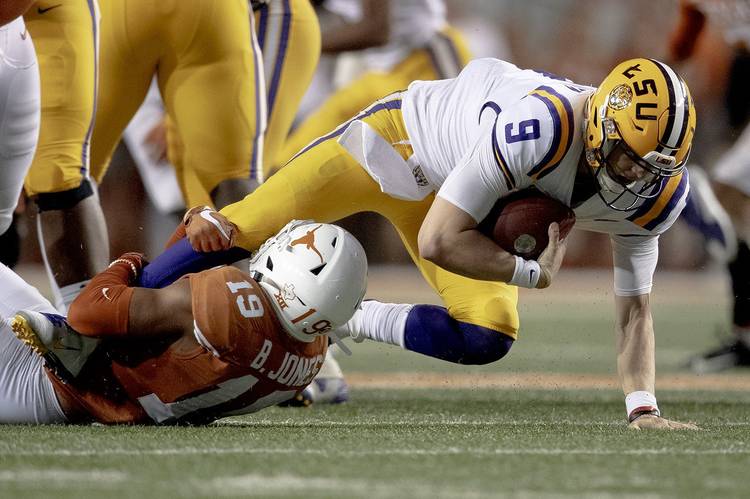 It was true last week before LSU battled Texas, and it remains true now that it’s over.

No matter who won or lost Saturday night at Royal-Memorial Stadium, neither team would be knocked out of the national championship race.

“All of our long-term goals are still out there,” Texas coach Tom Herman said after a thrilling but ultimately deflating 45-38 loss.

So now what? The Horns begin this week knowing that, as quarterback Sam Ehlinger said, when this team plays its best, it can beat anybody.

As one would expect, Texas slipped a few notches in Sunday’s Associated Press Top 25 poll and now sits 12th overall. LSU even leapfrogged Oklahoma and Ohio State, getting bumped up to No. 4, a move that speaks highly of both the Tigers and Horns.

The national reporters who descended on Austin will go elsewhere. The intense spotlight will not follow UT (1-1) down to Houston’s NRG Stadium this week for a tussle with Rice (0-2).

“Obviously, not going to dwell on this too long,” Ehlinger said. “We have a lot of stuff to get in tomorrow, watch the film, go over, learn from and move forward.”

Recent college football history shows that any Power Five team that loses in early September has plenty of time to climb back into the national conversation — assuming that team takes care of business.

In 2006, No. 2 Texas lost to No. 1 Ohio State at Royal-Memorial Stadium on Sept. 9. The Horns then won eight straight games and got back to No. 4 in the polls. Two losses in the final two regular-season games dropped them to the Alamo Bowl, though.

“We getting squeezed right now, like a sponge,” defensive end Malcolm Roach said. “Like a sponge gets squeezed, you see what comes out of it. Clean water or dirty water. We want it to be clean. Respond with a great week of preparation and get started on this week, go down to Houston and get a victory.”

Herman is right. This team can still win a bunch of games, reach the Big 12 championship game and still have an incredible season. Nothing has changed, really.

But the Horns have real questions going forward.

A secondary with a slew of young cornerbacks got exposed by LSU quarterback Joe Burrow. Jalen Green, who had the best grades of all corners in week one, found himself under duress all night. Kobe Boyce struggled again.

Where were UT’s safeties in the middle of the field? Caden Sterns was chasing Justin Jefferson when he caught a pass on third-and-17 late in the fourth quarter. Sterns couldn’t make a diving tackle, and Jefferson raced 61 yards for a backbreaking touchdown.

Herman said the plan was to blitz Burrow and “obviously get a sack or incompletion.”

“We had some guys free at times, and then we brought pressure, and they did a good job getting open and getting the ball off before the pressure could get there,” Herman said.

LSU coach Ed Orgeron flat admitted that when it came to his defense, “we couldn’t stop them.”

In two games thus far, Texas’ three-man defensive front has yet to get one sack. All five sacks have come via blitz pressure from either the secondary, like B.J. Foster’s two sacks against LSU, or the one from linebacker Joseph Ossai.

Texas’ starting defensive linemen have yet to even register a quarterback hurry, according to the statistics. Roach has five tackles in two games. Keondre Coburn has just one tackle, as does Ta’Quon Graham.

If the defensive front cannot generate a consistent pass rush, the Longhorns’ secondary will be tested ad nauseam for weeks to come.

“I’m going to say (Burrow’s) a great QB,” Ossai said. “He stayed poised, stepped up as a quarterback, made some really good throws, and that’s kudos to him. Really good job.”

Starter Keaontay Ingram, easily his own toughest critic, simply didn’t look like himself at times. He dropped an easy touchdown catch in the first quarter on fourth-and-goal. Ingram also let the ball squirt loose in the third quarter but recovered it. He finished with just 29 yards on 10 carries.

“I mean, our captain Collin Johnson fumbled last week,” Herman said. “We won the turnover battle, right? One to nothing. You know, we won the rushing battle, too. We trust him, and he does not need to have anything like that take away from his confidence.”

Texas had 121 rushing yards compared with LSU’s 102, thanks to Ehlinger. He had 60 yards on 19 attempts. The team’s whole plan this offseason was to run him less. Of course, that went flying out the window when three scholarship running backs got hurt before Labor Day.

Herman will hit the positives at his weekly press conference, and there are plenty. But this team has sky-high hopes of a championship season, and thus opponents will go after all perceived flaws.

All things considered, the Longhorns are still only two weeks into a 12-game marathon. They hope it goes 13 games, possibly even 14 or 15. Safety Brandon Jones said all the defensive mistakes are fixable. There’s plenty of time, and some breathing room via the schedule, to do just that.