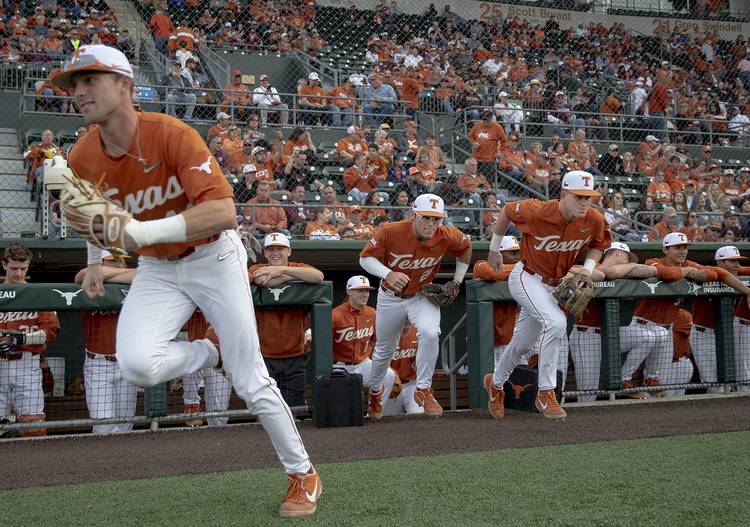 Texas players run onto the field before the start of an NCAA baseball game against Texas A&M on April 2, 2019 in Austin. [NICK WAGNER/AMERICAN-STATESMAN]

Following last week’s three losses at Oklahoma State, Longhorns coach David Pierce reminded his team that there may only be 13 games left this season.

That may sound like a weird thing to say after last year’s trip to the College World Series, but the NCAA postseason is no longer a guarantee for Texas. Only eight teams get into the Big 12 tournament and UT is currently a half-game up on ninth-place Kansas. D1Baseball listed Texas among the “last five in” in its most recent projections for the NCAA tournament, which were published hours before UT blew a three-run lead in the ninth inning of Tuesday’s 7-6 loss at Texas State.

“As bad as things seem to be going, I think we understand that we’re not out of this,” sophomore pitcher Bryce Elder said. “All we’ve to do is rattle off a few wins and it can turn things around right quick.”

Texas has lost eight of its last 12 games. The last four losses, though, have befuddled Pierce. Last week, Texas was blown out on consecutive nights in Stillwater. The Longhorns then fumbled away ninth-inning leads in walk-off losses to the Cowboys and Texas State.

Texas is not using any gimmicks to get out of this rut. It has already been down that path. Earlier this year, Pierce lit the stats and notes from a loss to UTSA on fire and Texas responded with a sweep of LSU. In an effort to hold the players more accountable, captains were named midway through the season. Pierce even recently took over as UT’s offensive coach in the third base box.

Pierce also isn’t yelling anymore, either. “We’re past that,” he said. “That’s the worst thing I can do with this team right now.”

UT’s best bet may be a detail-oriented approach. That includes individual meetings throughout Thursday’s practice and detailed explanations from coaches about certain calls.

The players also have been asked to be more self-critical when they grade their own performances. As an example, Pierce cited third baseman Ryan Reynolds’ role in a key ninth-inning error on Tuesday. Shortstop Masen Hibbeler was rightfully credited with the error, but Pierce needed to point out to Reynolds that where he stood on the base did not create an easy target for his teammate.

Pierce admitted that the term “playing the game one pitch at a time” is a cliché that is used by programs everywhere. But, the coach added, “To truly get there takes an elite mentality and we’re far from an elite mentality right now.”

Nationally, he ranks sixth in strikeouts and 33rd in ERA. Texas has seen four pitchers who currently claim one of the NCAA’s 100 best ERAs, and the Longhorns have scored three earned runs over 31 innings. Texas is 1-3 in those games.

“They’ve had a really good season, (Manoah’s) been throwing lights out,” UT catcher Michael McCann said. “We’re in attack mode. I think our mindset is we have got nothing to lose.”

Himself a two-time winner of the Big 12’s weekly pitcher award, Elder (2-3, 3.05) will oppose Manoah on Friday. Texas will turn to junior Blair Henley (6-2; 3.81) on Saturday. Pierce has not yet announced who will start the series’ finale.

“I’m going to go out there and compete and give my guys a chance to win,” Elder said.