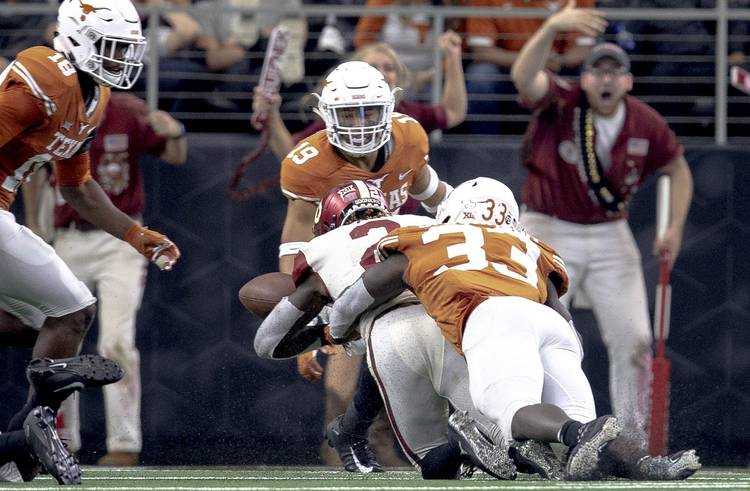 Revisiting our five pregame questions that were facing the Longhorns ahead of Saturday’s 39-27 loss in the Big 12 championship game.

Sure, Murray has a good arm. But he does his most damage to defenses with his ability to improvise and run with the ball. Back in October, he finished with 92 rushing yards, 67 of them coming on one electric run. On Saturday, Murray finished with 39 yards on 10 carries, an average of 3.9 yards per, and his longest run went for 15 yards. Of course, he still finished with 418 yards of total offense. But the Longhorns had allowed four opposing quarterbacks to be their team’s leading rusher — TCU’s Shawn Robinson, Oklahoma’s Kyler Murray, Baylor’s Charlie Brewer and Texas Tech’s Jett Duffey — losses to Oklahoma State and West Virginia were sealed by a critical late quarterback run. Murray was the country’s fifth-leading rusher among quarterbacks before Saturday, averaging 7.5 yards per carry.

2. What was Lil’Jordan Humphrey’s biggest play?

One that didn’t count.

With Texas trailing by 12 with less than two minutes to play, Humphrey weaved his way for a 92-yard kickoff return for a touchdown — that was nullified by a holding penalty on Josh Thompson. Humphrey had a big day in October against the Sooners (nine catches for 133 yards) but went largely quiet on Saturday, at least for the first half. He finished with good-enough numbers — 10 targets and seven catches, but only for 53 yards, along with a touchdown — but averaged 7.3 yards per catch. He converted a key third down on a third-quarter drive that he completed with a nice touchdown grab.

3. Did Texas control the ball — and the clock?

Pulling off a couple of long, clock-consuming drives would have been the perfect game plan against the quick-strike Sooners, who had the country’s No. 1 offense. In October, Texas held a seven-minute advantage in time of possession — 33:50 to 26:10 — but things were reversed on Saturday, when the Sooners held a four-minute advantage (32:00 to 28:00). And if anyone’s going to crow about controlling the ball, it’s the Sooners. Their game-sealing drive in the fourth quarter after the big safety took more than six minutes off the clock. The Longhorns were averaging 32:27 on time of possession this season. The only team that held OU to less than 35 points this year has been Army, which leads the country in time of possession.

4. Did Gary Johnson make up for last week with a big game?

Johnson finished with 11 tackles and made two big tackles that took two likely touchdowns away from the Sooners. In the first half, he stuffed OU running back Trey Sermon at the goal line on third down, forcing a Sooners field goal. And in the fourth quarter he forced a CeeDee Lamb fumble on the tail end of a 54-yard pass play; Texas recovered at its own 8. That suspension for last week’s regular-season finale in Lawrence seemed like a distant memory on Saturday.

5. Were there any unsportsmanlike conduct penalties?

There were facemasks and one Kris Boyd horsecollar and one unsportsmanlike call on Oklahoma, but that one was for spiking the ball after a fourth quarter touchdown. With all the talk this week about whether the Sooners would be flagged for flashing any “Horns Down” hand signs, none were called, there wasn’t any on-field shoving or altercations and, generally, emotions didn’t get out of hand in a bad way. There were big hits, big plays and several momentum swings. But for the most part, the Longhorns and Sooners kept everything in control.