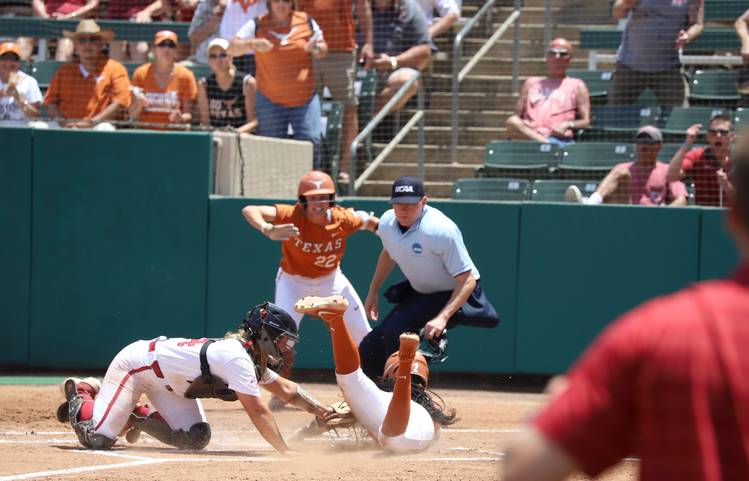 Texas softball player Janae Jefferson tries to run home but is tagged out by Alabama catcher Reagan Dykes at Rhoads Stadium in Tuscaloosa, Ala., on May 25, 2019. (Karley Fernandez/for Tuscaloosa News)

TUSCALOOSA, Ala. — As a ball off the bat of MK Tedder found its way into the glove of Alabama right fielder KB Sides on Saturday afternoon, Texas’ 2019 softball season came to a close.

Texas instead ends the year with a 46-17 record.

“It’s disappointing, especially since I’ve been (to the WCWS while playing at Oregon),” junior Shannon Rhodes said. “This team deserves the world and I can’t wait to see where we go.”

On Saturday, Texas and Alabama traded run-scoring singles to right field before the Crimson Tide took a 2-1 lead with a sacrifice fly in the third inning. UT was poised to head back to its dugout with just a one-run deficit, but a ranging Reagan Hathaway dropped a fly ball in center field. Pinch-hitter Caroline Hardy drew a walk in the next at-bat, and the top of Alabama’s line-up made Texas pay for its mistakes.

Facing a 1-0 count against Shea O’Leary, Sides cleared the bases with a well-hit ball over the fence. Bailey Hemphill, who tagged O’Leary for her 24th homer of the year on Friday, then got the best of the freshman right-hander again. The back-to-back homers gave Alabama a 6-1 lead and the Crimson Tide added another run in the fourth frame.

“That five-run inning was a big-time inning for us,” Alabama coach Patrick Murphy said. “We knew that they’d make another run, there was no doubt in our mind.”

Texas forced a decisive showdown in the best-of-three series when it dug itself out of a 4-0 hole in Friday’s 7-5 win. Less than 24 hours later, Rhodes hit a grand slam in the fifth inning to cut Alabama’s lead to two runs. After Alabama scored in its final at-bat, Tedder was retired by Montana Fouts with two runners aboard to end the game.

“Texas Fight is no joke,” Rhodes said. “We just knew that we had to lay it all out on the line and keep fighting until the last pitch.”

The loss to Alabama closed out Texas’ first season with head coach Mike White, who was hired away from Oregon this past June to replace program founder Connie Clark. The Longhorns saw positive results in White debut:

Three seniors — pitcher Brooke Bolinger and outfielders Bekah Alcozer and Ki’Audra Hayter — suited up for the last time on Saturday, but the retention of a veteran squad should set a high bar for Texas in 2020. All five of UT’s all-conference honorees will be eligible to return next season. Sophomore Janae Jefferson was one of five underclassmen who hit at least .300 for Texas this spring. Despite taking the loss in the season finale, O’Leary will still likely end this year as the NCAA’s ERA leader.

“We can only go up from here,” catcher Mary Iakopo said. “Work hard in the fall and get ready for the next season.”

Around the bases: After the game, White said that “there’s a great case out of those three games for instant replay and also an electronic strike zone.” A first-inning play in which Jefferson was thrown out at home was among the calls that White took issue with… Murphy announced that Alabama will host Texas in a regular-season tournament in 2020 before travelling to Austin in 2021. … Texas sophomore Ariana Adams pitched 3 1/3 innings in her first appearance of the postseason. … One day after she was hit in the face by a teammate’s throw, junior Miranda Elish watched the game from UT’s dugout.