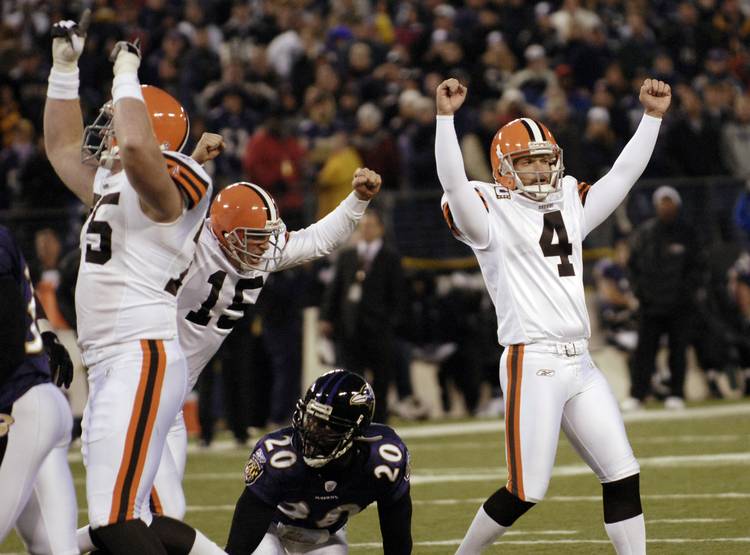 In pre-game warmups, well before Phil Dawson’s signature moment at Texas, the ball wobbled through the air on all three of his 40-yard field goal attempts. Every kick was good, but they looked awful.

When play began, Dawson missed two field goals that day, including a 58-yarder just before halftime that looked more like a sidewinder. One Virginia Cavalier ran off the field and shouted at the Texas kicker, “You’re horrible!”

But Dawson kept his resolve, just like you’d expect from a future Pro Bowler.

UT coach John Mackovic summoned Dawson again with the ball at the 33-yard line with three seconds left as Texas trailed by two. It was a 50-yard attempt into a 20 mph wind off what was then a rock-hard artificial surface at Memorial Stadium.

What happened next won’t be what NFL fans talk about when recapping Dawson’s 20-year pro career. But it’s what every Longhorn remembers about the Lake Highlands graduate who emerged into a team leader in Austin from 1994-97.

“You do your job,” Dawson told his teammates. “I’ll do mine and we’ll win.”

Dawson’s kick sailed through the air, stopped almost dead even with the crossbar, fell into open space and somehow limped across the mark to give Texas a 17-16 win on Oct. 21, 1995. “The kick from Dawson is … GOOD!!,” UT play-by-play announcer Bill Schoening screamed.

Dawson, 44, logged two decades in the NFL and called it quits Thursday, bringing an end to one of the most consistent kickers in NFL history and a well-known face to the Cleveland Browns.

After being cast aside by the Oakland Raiders and New England Patriots as an undrafted free agent, Dawson signed with the Browns and won the job in 1999. He logged 14 seasons in Cleveland, then spent four with the San Francisco 49ers (2013-16) and the last two with the Arizona Cardinals (2017-18).

Dawson signed a one-day contract so he could retire with the Browns. Last season, he was the second-oldest player in the league behind Indianapolis kicker Adam Vinateri.

At Texas, Dawson was 38-for-38 on extra-point attempts in 1994. He also ranks first in UT history with 59 made field goals, one more than Kris Stockton and Jeff Ward.