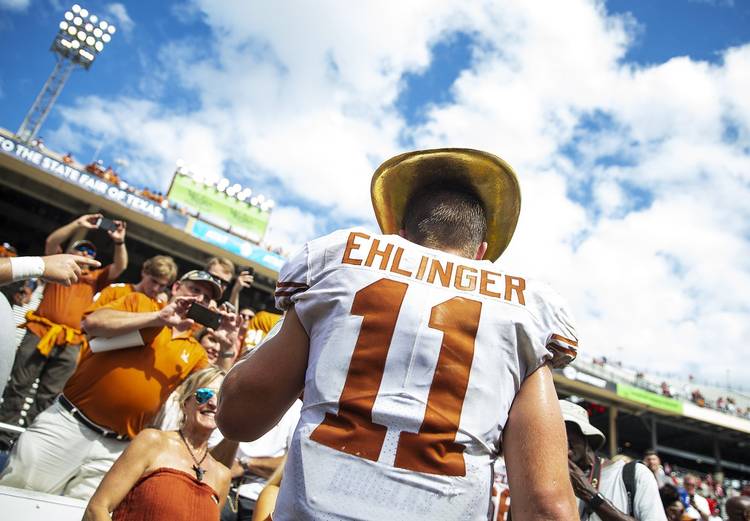 What time is it? Time for one hellacious rematch.

Trying to determine the biggest and best Texas-Oklahoma game ever is akin to picking your favorite child. Or choosing between your left hand or right to throw the Horns Down.

Texas fans still crow about quarterback Peter Gardere’s 4-0 record against the Sooners. OU fans believe all five wins over UT coach Mack Brown in 2000-04 were pretty big, too. There was a megamatchup in 2008 as No. 5 Texas toppled top-ranked Oklahoma.

The Golden Hat, currently in UT’s possession, is all about bragging rights. But at no time in the 118-year history of this rivalry has any game ended with the winner hoisting a conference championship trophy. That will change at 11 a.m. Saturday in the Big 12 championship game.

The last time these two teams met twice in the same season was in 1903. Everything’s changed, but the Red River rivalry remains the same.

Texas quarterback Sam Ehlinger vs. OU’s Kyler Murray. Tom Herman, Lincoln Riley, Bevo XV, the Sooner Schooner, all of it collides in the weirdest of places — AT&T Stadium in Arlington, which is 21 miles west of the Cotton Bowl in Dallas.

The sixth-ranked Sooners (11-1, 8-1 Big 12) will be the home team by virtue of finishing with the best league record. OU needs to win and hope for College Football Playoff craziness to get into the national semifinals.

The 14th-ranked Longhorns (9-3, 7-2) are shooting for their first league title and first 10-win season since 2009. If UT wins, it will probably secure a spot in the Sugar Bowl. A loss might send the Horns to the Alamo Bowl.

All Cowboys owner Jerry Jones needs to do is stock concessions with Fletcher’s corny dogs and somehow move Big Tex, the Ferris wheel and the midway down Interstate 30.

Cue the trash talk about OU’s maligned defense after the Sooners gave up 704 yards in Friday’s 59-56 win over West Virginia. “But OU has no defense,” Texas defensive end Breckyn Hager said Nov. 17 after a win over Iowa State. “And what time is it? It’s 11:12 … and OU still sucks.”

The Big 12 office forced Hager to apologize for violating the league’s sportsmanship rules. Believe it or not, the overwhelming response on social media — from both sides of the Red River — was that Hager shouldn’t apologize for anything.

This is a rivalry, for goodness sake.

“Blows my mind,” OU linebacker Curtis Bolton told ESPN on Friday. “We hung 50 on them too. If anyone on their defense has anything to say, they can have fun playing Kyler next week.”

Actually, it was 45 points on Oct. 6. And Texas scored 48, an offensive flurry capped by Cameron Dicker’s 40-yard field goal with 9 seconds remaining.

Riley made it through a rather tense press conference with a clenched jaw.

“Congratulations to Texas,” the OU coach said. “They played a very good football game. That was one of the epic ones there. That’s one people will keep talking about for years and years and years.”

Nobody at the league office will admit it, but this is what the Big 12 wants. Probably even needs. The league’s two strongest football brands playing in early December is good for the Big 12’s overall health, no matter how much grousing comes from other league outposts.

Even Commissioner Bob Bowlsby admitted there was a spike in Big 12 championship ticket sales after the first Texas-OU game. “Well, let’s just say we had a good week of sales afterward,” Bowlsby said at Big 12 men’s basketball media day.

Both teams made it to Arlington. Now, they just have to put on a show.

OU ran the table after losing to the Longhorns. The Sooners have allowed at least 40 points in the past four games. But they’ve advanced due to Murray’s crazy, sensational unpredictability. He’s now thrown 37 touchdown passes while averaging 71.1 rushing yards per game.

Texas had a two-game losing skid after winning six straight. Oklahoma State just took it to UT from the beginning and won 38-35. West Virginia escaped with a successful two-point conversion attempt and won 42-41. The Horns have since won three straight, including a 24-17 decision Friday at Kansas.

Asked what this opportunity means for UT’s seniors, Ehlinger said, “They’ve been through so much. They’ve had so many different coaching changes and hardships while being at this program. To be able to get this opportunity, it’s awesome.”

Herman and Riley might not care to face each other again. But make no mistake, this is indeed awesome for the fans, those watching at home, the Big 12 and the sport as a whole.

Is Texas ready to win a championship? Defensive end Charles Omenihu sure thinks so.

“We’re playing for one, if that tells you enough,” he said.