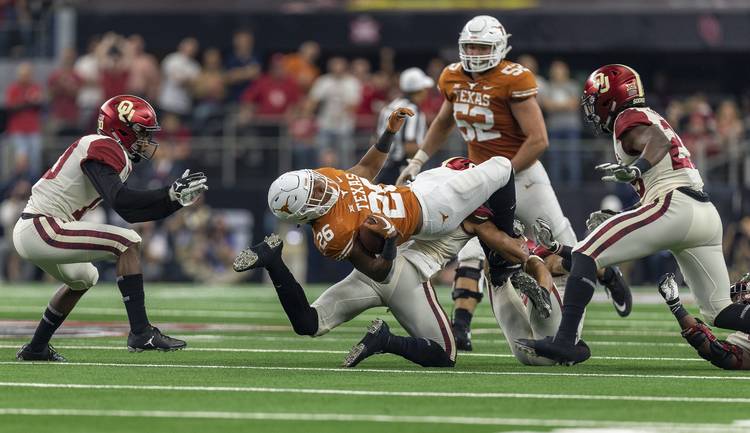 ARLINGTON — When making comparisons to other elite teams, the knock on Oklahoma always has been its defense.

As in, the Sooners didn’t have much of a defense that could stop anyone with any consistency. National analysts have pondered whether the Sooners are a complete team, especially after they survived a 59-56 thriller over West Virginia to earn a spot in Saturday’s Big 12 title game. Their offense was lights out. The defense was anything but.

After OU’s 39-27 win over the Longhorns, the Sooners would prefer you put those defensive questions aside.

“When we weren’t scoring, they got stops” OU’s Heisman-worthy quarterback Kyler Murray said of his defense. “That’s how football is supposed to be played.”

The turning point of the game was a series of defensive plays by both teams midway through the fourth quarter with the Sooners clinging to a 30-27 lead.

Murray had just completed a 54-yard pass to CeeDee Lamb. But Longhorns linebacker Gary Johnson punched out the ball on the UT 8.

With the sudden change, the Sooners dropped UT tailback Keaontay Ingram for a one-yard loss. Then Texas called for play action. And OU interim defensive coordinator Ruffin McNeill sent in the perfect response.

Nobody picked up Sooners cornerback Tre Brown, who zipped toward UT quarterback Sam Ehlinger on a blindside blitz. He sacked the quarterback for a safety to pad the OU lead to 32-27.

“I just see lights,” Brown recalled. “Especially when I saw (Ehlinger) do play-action pass. I was like, “Wow, I can’t believe he just faked the ball. I got a green light and I took my shot and delivered.”

Brown said it was the only time he blitzed in the game. Texas would’ve had had to do a really thorough film study for other times the Sooners have used a similar call. McNeill said he’d made it eight times before Saturday.

“It’s a blitz where particular players and parts of the field determine who may rush and who may not rush,” McNeill said. “I thought it was great execution. It proved to be huge late play for us.”

Overall, the Sooners sacked Ehlinger three times. The quarterback appeared far more uncomfortable throwing the ball in the second half than in the first. In the fourth quarter, Ehlinger was only 4 of 11 for 67 yards.

“I don’t think (Ehlinger) had any opportunities to get clean throws off,” Norwood said. “It’s something we try to harp on each and every week to keep pressing forward and keep getting better as a group and coming out and playing our game. Those plays are going to come.”

Plus, the Sooners controlled UT’s rushing game. The Longhorns gained only 88 yards, their worst rushing production of the season. The last time UT failed to crack 100 in a game was Nov. 4, 2017, against TCU.

“I thought we have taken big steps (on defense) the last couple of weeks,” said OU coach Lincoln Riley. “Our defense has to play against what other people don’t. Because people lineup against us and know that if they don’t score 40, the chance of winning that game isn’t very high.”

Now, the Oklahoma post-season fate is up to the College Football Playoff committee and whether the group considers the four-time defending Big 12 champions a complete team and worthy of the final four.

“I feel like we’ve had our highest performances in the last couple of weeks in huge games against dynamic offenses,” Riley said. “And I don’t think we’ve played our best yet, and I think we’re going to get there.