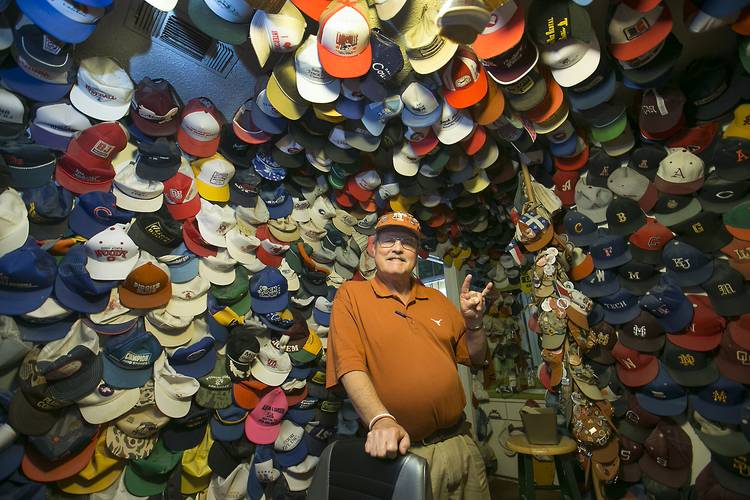 This isn’t a house.

No, this is Scott Wilson’s 1,008 square feet of hype, lovingly dedicated to University of Texas athletics. It’s easy to gawk at the pieces of art that fill the walls. The home is covered with banners and pennants, pictures and artifacts, newspaper clippings and posters, framed letters from coaches. Those walls and ceilings are plastered with some of the most iconic moments in Longhorns history. There’s more history than white space.

If sports is religion in Texas, then Wilson’s one-story house in north Austin serves as the church.

Also: A look at the memorable moments in UT history that Wilson has witnessed.

When you arrive at his home, you first walk past his 1975 burnt orange Cadillac, the ones with horns sticking out of the hood. When Wilson answers the door, you’re asked to wipe your feet before entering his shrine.

You’ve never seen a living room like this before. On the wall to the right are framed articles, all of them written about Wilson when he was a member of the Wild Bunch, a group of rowdy UT fans that caused havoc in the 1970s and 1980s. On the wall in front of you are even more letters and posters. There’s also a framed home plate with a Longhorn emblem on it. The base is signed by Roger Clemens.

“To Scott,” Clemens’ message reads. “Thanks for being there for the Horns! The Eyes of Texas! Nat’l Champs 1983.”

The wall to your left features Wilson’s oldest piece of memorabilia, a UT pennant from his very first Texas football game in 1958, when he was 7 years old. There’s also the left cleat given to him by former baseball player Connor Rowe, the cleat that Rowe wore when he crossed home plate with the winning run to end the marathon Texas-Boston College regional game in 2009.

Down the hall, there’s a little room with even more items. A green folding chair is covered in plastic, the autographs on it barely visible. It’s the chair Wilson used during the 2012 NCAA men’s golf championship in California, and the autographs are from every member of UT’s national championship squad, from Dylan Frittelli to Toni Hakula to Jordan Spieth.

Wilson wanted to get a picture with Spieth after the final match, but Spieth was talking to a girl.

“I didn’t want to interrupt him,” Wilson said.

Wilson’s master bedroom is further down the hall. More photos, more framed articles. Even more posters on the ceiling. Batting helmets from Texas, Oklahoma, Texas A&M and Houston hang on the wall over the bed. The bed and the Longhorn sheets are neatly pressed, the pillows placed just right. Wilson has given UT not only his heart and his home, but also his bed — Wilson rarely sleeps in it, opting for the couch instead.

The room next door is the hat room. Hats and caps fill it. There’s a thousand hats — a “Keep Fred” hat supporting Fred Akers, one of Brent Musberger’s old CBS Operations hats, and many more. There’s definitely clutter, but Wilson insists he’s not a hoarder because, he says, “hoarders aren’t organized.”

The back wall has two framed UT shirts and a giant UT banner that reads “Man Cave.” Below it are more framed stories about him. There’s a Tulsa World profile of him from last year, and a Los Angeles Times column by Bill Plaschke from 2006.

Plaschke described Wilson’s home as a “three-bedroom, 1 1/2 bath pep rally.” And it is.