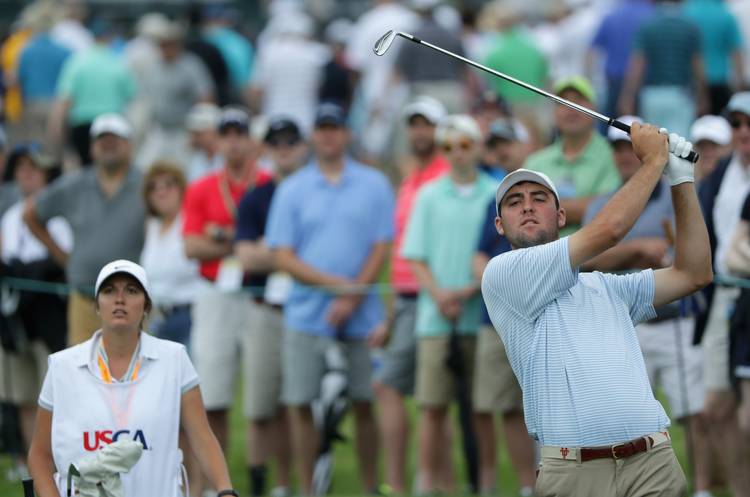 ERIN, Wis. — The Texas Longhorns’ Scottie Scheffler did Friday what he could not do last year in the U.S. Open: He followed up a great opening round of 3-under-par 69 with a decent second round of 2 over par to post a total of 143 and make the weekend competition for the first time in America’s national championship.

Last year at Oakmont, Scheffler delivered a 1-under 69 before a storm came through on Thursday. But he just made too many mistakes the next day as he skyrocketed to an 8-over 78 and missed the cut.

“I wouldn’t say different, but I would say he’s more mature this year,” said Callie Scheffler, his caddie and older sister.

Maturity, patience and persistence are the keywords for a U.S. Open, American golf’s annual pressure-cooker.

Scheffler, who just finished his junior season at UT and will turn 21 on Wednesday, entered Friday as the low amateur, four strokes behind leader Rickie Fowler. At the end of two rounds, he had been surpassed as top amateur by Texas A&M’s Cameron Champ, who is at 5-under-par 139.

With two grueling, rain-soaked days expected this weekend, there’s a long way to go. But no matter what, the Texas standout seems to be managing his expectations well going into the biggest rounds of his life.

“Well, no matter what, I’m going to gain a lot of experience this week, so I really feel like I can’t go wrong,” Scheffler said. “We’ll see what the world has in store for me the next couple days.”

Golfers know that playing with freedom, unshackled by major expectations, can be crucial to performing well.

Starting on the back nine Friday, Scheffler struggled early, but he rebounded for a solid finish.

“I felt like I hung in there pretty good,” he said. “I wasn’t really swinging well and put myself in bad spots in the beginning but hung in there.”

The 20-year-old was 3 over through his first six holes and made the turn at 3-over 39. He picked up a couple of birdies on Nos. 1 and 2 but carded another bogey on 3 to finish at 2 over for the day. His 1-under total puts him six shots off the pace of the leaders, Paul Casey, Brooks Koepka, Brian Harman and Tommy Fleetwood.

Callie Scheffler enjoyed walking the fabled fairways of Oakmont last year as her brother’s caddie but says this U.S. Open is even more special for the family.

“This year is especially special because both our younger sisters are here,” she said of Sara, 18, and Molly, 17. “Last year they were on a missions trip to Haiti, so they missed it.”

The four siblings have been riding to the course together, with Sara choosing the music “until it gets too hippie,” said Callie, at which point they all resort to their favorite style: some good, old-fashioned country music.

Callie, a scratch player herself, just graduated with a master’s in marketing from Texas A&M.

They say golf is a good walking sport, and in this case, it’s siblings enjoying their national championship. And the three sisters are delighting in seeing their brother do so well.

“It’s the U.S. Open. I could never imagine myself getting to this level, so it’s fun to watch him do it,” Callie said.

Back in blue: Texas’ Morgan Cooper eager to sign with Dodgers, start his pro career