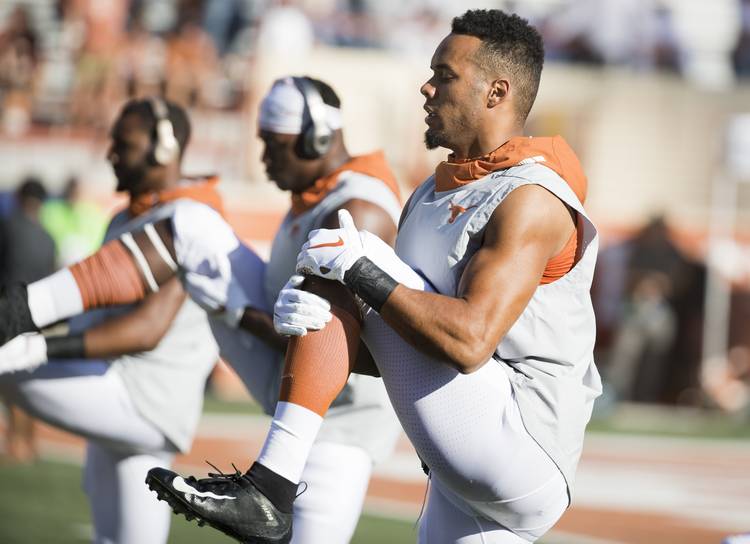 Collin Johnson figured he finally was past this sort of thing. At least the Texas wide receiver hoped so, anyway.

After all, the Longhorns had beaten a by-God SEC team, No. 6 Georgia, in the Sugar Bowl. They were ascending, weren’t they?

So sure, Johnson is frustrated with the Longhorns’ 5-3 season that has included losses to top-10 teams LSU and Oklahoma but also one at unranked TCU the last time the Longhorns played, on Nov. 2, and the home scare against the Kansas Jayhawks on Oct. 26.

“For sure,” Johnson said. “Especially this being my senior year, you kind of have the way you want it to go in your head.”

Though Texas is an elite brand, many Longhorns over the years experienced the struggle to gain, or maintain, that footing as an elite program, the type that won the 2005 national championship and lost in the 2009 title game under Mack Brown.

The bottom fell out in 1984, when the Longhorns slid from No. 1 in the country in mid-October to a 7-4-1 record that included a 55-17 loss to Iowa in the Freedom Bowl. In the 34 years since, Texas has lost four or more games 22 times. In 16 of those 22 seasons, the Longhorns were ranked in the top 20 at some point before slipping.

Last year was one of those four-loss seasons — The Longhorns went 10-4 — but it felt different than most.

But here they are, inducing speculation about the impact of injuries to a young secondary — though they were healthy when LSU’s Joe Burrow threw for 471 yards and four touchdowns — and about the defensive scheme.

“We’ve all been hit in the face before,” said Johnson, one of the team’s captains. “But the older guys learn how to deal with adversity. The older guys tell our story to the younger guys. They can get through it with our help.”

Johnson said bonds must be forged long before crises arrive.

“If the only time someone is talking to you is when he needs you to practice hard or needs you to perform in the game, that doesn’t have a lot of value,” he said. “When someone is telling you he needs you to go hard, and he’s talked to you every day of that week, made sure you are OK, texted you, checked on you — you’d be more inclined to respond.”

Quarterback Sam Ehlinger, a junior, has a similar view. “When you have that relationship, you can have great conversations with the people you are trying to lead and help them understand that all we can control is the present and what we do to continue to get better,” he said.

Texas coach Tom Herman, trying to hold his team together, said he met with most of the freshmen — the third-ranked recruiting class of 2019 — during the off week hoping to “reacquaint myself with those guys individually.” He believes enhanced relationships are needed between veteran and younger players.

Defensive end Malcolm Roach, another senior captain, said leadership is an asset that must be imparted by older players to the younger ones. He learned from former teammates Poona Ford and Chris Nelson.

“You can tell how much somebody is invested by how badly they feel after a loss,” Roach said. “With the work that we put in, when you lose, I’m devastated. When we win, I’m ecstatic.”

Herman said Monday that the Longhorns’ backs are “on the ropes” going into their game against No. 20 Kansas State. Roach agreed.

“There is only one way to respond. You gotta keep swinging,” he said. “Our record speaks for itself. We are against the ropes.”