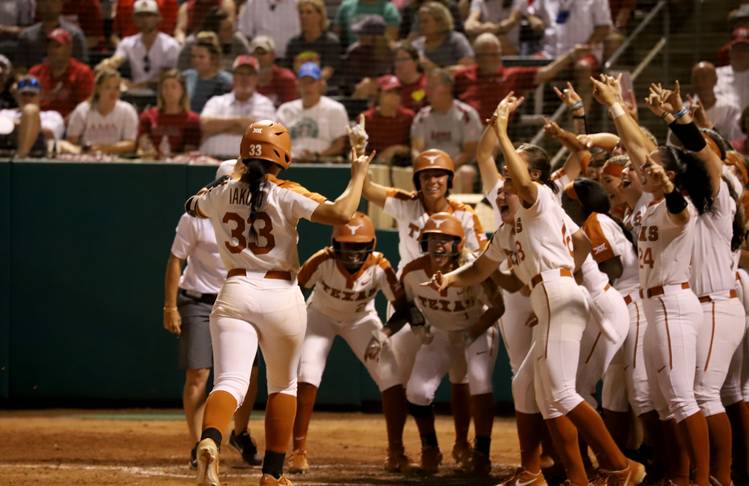 Texas softball players celebrate after Mary Iakopo hit a home run against Alabama at Rhoads Stadium on May 24, 2019. UT tied the super regionals with a 7-5 win. (Karley Fernandez/for Tuscaloosa News)

TUSCALOOSA, Ala. — To put it mildly, the odds were stacked against Texas on Friday night.

In the second inning of a super regional game against Alabama at Rhoads Stadium, Texas found itself looking at a 4-0 deficit. Its star player had just been helped off the field and was heading to an area hospital. The pitcher asked to save Texas’ season had pitched less than an inning in the postseason.

“Their resiliency they showed and the fight and the character, it bodes well for this team,” Texas coach Mike White said. “If this is our final stop, then so be it. But if it’s not, then I think we’ve learned a lot from this and we can build on that going forward.”

Starting for the sixth straight game — and sixth time in seven days — Texas pitcher Miranda Elish fell behind 3-0 in the first inning after four batters reached base on full-count pitches. Elish then surrendered a one-one walk in the second inning, which set up a bunt attempt by Alabama’s Elissa Brown. The ball bunted by Brown was ruled dead, but Texas catcher Mary Iakopo still fired off a throw to second base. Instead of reaching its intended target, Iakopo’s throw struck Elish in the face.

Elish immediately went to the ground. She was eventually helped off the field and taken away in an ambulance as a precautionary measure. After the game, White said that Elish was in “good spirits” and sent the team a congratulatory message.

The injury to Elish left Texas without an All-American candidate and the folk hero of its postseason. In last week’s regional, Elish threw 429 pitches over two days as Texas won four times. Elish, who threw four innings in a 3-0 loss to Alabama on Thursday, entered Friday’s fight with an 18-10 record and a 1.72 ERA.

“We definitely said that she was our motivation,” said sophomore outfielder MK Tedder, who was among the Longhorns who gathered to pray when Elish went down. “We definitely took what happened to make sure that we were doing it for her.”

Alabama extended its lead to 4-0 shortly after Elish’s injury, but the Longhorns pushed back. Saying that she “was thinking about Miranda the whole time,” Iakopo crushed a three-run homer in the third inning. Tedder, an Alabama native, led off a four-run fourth frame with the fourth home run of her career.

The seven-run outburst put the spotlight on freshman pitcher Shea O’Leary, who was White’s first choice to relieve Elish since senior Brooke Bolinger had thrown on Thursday. O’Leary entered the game as the NCAA’s leader in ERA. The freshman right-hander, however, was limited at the end of the regular season by an ankle injury and had been ineffective in her only postseason appearance.

O’Leary threw two wild pitches in the second inning as Alabama added to its lead, but she quickly settled into the game. O’Leary ended up striking out four batters while issuing one walk. A solo homer by Bailey Hemphill in the fifth inning was one of two hits allowed by O’Leary.

“She went out there and competed,” Iakopo said. “I was very proud of her. I couldn’t have asked for a better time to come in.”

Around the bases:  White ruled Elish out for the rest of this super regional. White said O’Leary, Bolinger and sophomore Ariana Adams were all options for Saturday. … Janae Jefferson had three of UT’s nine hits and is hitting .406 this season. Only seven Longhorns have finished a season with a .400 batting average. … Iakopo also drove in a run with a groundout in the fourth inning. … Previously, the biggest comeback for Texas in a win this season was a two-run hole that the team dug itself out of against Ole Miss on Feb. 23.