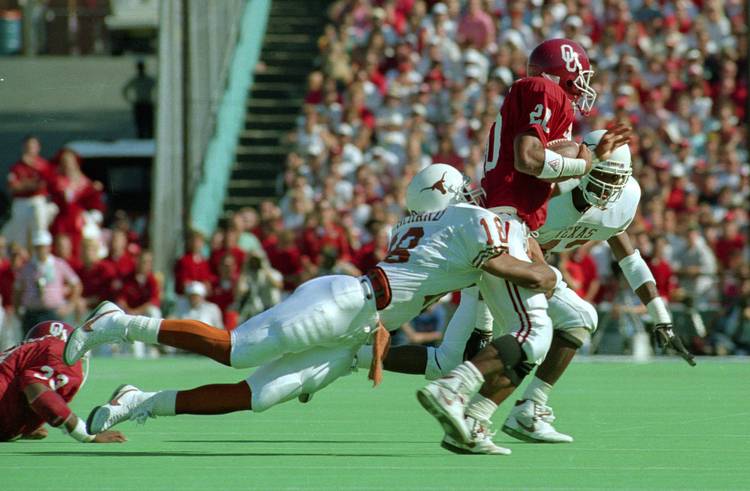 Former Texas safety Stanley Richard, who played at UT from 1987-90, was known as the "Sheriff." He completed his degree in applied learning and development in May 2020. (Courtesy of Texas athletics)

Each spring, the Texas athletic department publishes a list of its spring graduates. Most of the names are those you’d expect, current seniors from various sports. One name this semester was stunning.

Or rather, it was Shocking.

Stanley Richard is now 52. His name wouldn’t register with most current Longhorns. They wouldn’t know how this all-everything talent from tiny Hawkins would become an All-American safety in 1990. Or, how he became a first-round draft pick nearly 30 years ago and spent eight seasons in the NFL.

But let this be known to everyone ’round these parts: “The Sheriff” is now a UT graduate.

“Now I’m a student. A struggling student. I went back to the Ramen noodles, which I just love,” Richard told the American-Statesman. “I totally enjoyed the experience. The mental challenge — oh my gosh! — but it’s so worth it.

Richard wasn’t the only high-profile graduate this spring. Former receiver and track sensation Marquise Goodwin, now playing for the Philadelphia Eagles, also finally made that long jump to his diploma. Somewhere in Tennessee, former men’s basketball coach Rick Barnes will be glad to hear James Thomas elbowed his way to the finish line, too.

Eighty-three current and former UT athletes refused to let the coronavirus pandemic stop them short of the goal. Counting those who graduated in the fall, Texas athletics cranked out 119 graduates during the 2019-20 year.

Ricky Brown, a point person for former Texas letterwinners, said coach Mack Brown called graduation the completion of a journey. “You can come to the University of Texas have a great athletic career and make lots of friends,” Brown said. “But if you don’t have that degree, get that paper, you didn’t finish what you came her for.”

Texas athletics is making a concerted effort to help all former athletes finish their coursework. To qualify, an athlete must have left in good academic standing and have shown progress toward their degree. Richard graduated with a degree in applied learning and development with a minor in social work.

His final season at UT was 1990, the famous “Shock the Nation” team that went 10-2 and won the Southwest Conference. Richard played corner for several seasons but finally got moved to safety. He excelled in tackling and dominoes.

“It’s my room, so I had this little badge and I’ll put it on. I would just tell all the players, ‘You in here playing this? Yeah? I’m taking this, I’m running this show,’ ” Richard said. “Anyway, I was running late for practice one day and I had forgotten I had the badge on.”

Richard said he was doing an interview and someone asked if he was in charge. Are you the sheriff?

The next day, in the buildup to facing the Houston Cougars’ Run-and-Shoot offense, the headlines blared it all. “There’s a new sheriff in town. His name is Stanley Richard.”

“It’s not the Wheaties box, but boy, does that look good,” Richard said.

Richard had nine tackles, one interception and one pass breakup as 14th-ranked Texas upset third-ranked Houston 45-24. To this day, it’s still considered one of the loudest games in Royal-Memorial Stadium history.

That nickname didn’t serve him too well initially with the San Diego Chargers. Every opposing receiver knew how to search out the ninth overall pick from the 1991 draft and let him have it.

“They enjoyed singing to me, ‘I Shot The Sheriff,’” Richard said with a laugh. “I got sick of that.”

Just like he did at UT, Richard stuck it out and made a career on Sundays. He played eight seasons from 1991-98 with San Diego and Washington, making 21 interceptions in 124 career games. He was inducted into the UT Athletics Hall of Honor in 2004.

It’s now quiet on Richard’s farm, which is almost 300 acres back in Hawkins. Players think they’ve got it bad? Richard said there are three things worse than football practice — digging a hole, cleaning a fence line and cutting firewood.

The East Texas town hasn’t grown all that much, at least not like Longview or Tyler. When Richard left for UT, he was in a graduating class of 49. The town’s population was 1,302.

His mother Mary told him, “Give them everything that you have that’s inside of you, that I saw you grow up with; show them what it’s like to love and to care.”

As the youngest of four children, Richard knew he had to make it in Austin, even though the sheer size of UT’s campus was intimidating. Several years ago, with his mother in her twilight, Stanley and Mary had one important talk.

“When she passed, she had me promise to her that I would go back to school and figure out what it was that made me so happy when I was at the University of Texas,” Richard said. “I thought about it and said to myself, ‘I don’t know if I can do this.’ But I did it anyway.”

Richard estimated he was about 40 hours shy of a degree. To test the waters, he took a class at Tyler Junior College. Then another. “You know, back in the ’80s, when I rocked the joint, it was challenging, but man, there’s a lot more,” Richard said. “But I had chance to experience it. What a ride.”

In 2017, Richard’s old teammate Oscar Giles became the defensive line coach under Tom Herman. Giles went to see “Hawk,” as he called Richard, and started nudging him to look into finishing his degree.

Finally, during the fall and spring semester, Richard was back on campus putting in the work.

Campus life has this invigorating charge that’s hard to describe. Everybody wants to feel a part of something, be it a group or team. For Richard, being on campus has sparked a renewed sense of spirit, a renewed purpose.

Richard said he’d love to work with current UT safety Caden Sterns and the rest of the defensive backfield, if given a chance. It’s not that he needs work, per se. “After doing all this and not sharing it with anyone, then what’s the point?” Richard said.

The Wolf and The Sheriff working together? It sounds intriguing, to be sure.

For the time being, Richard is reveling in his own personal accomplishment. Now that he’s a college graduate, there’s a lot of living still to do. And some jewelry to acquire.

“Now what I can say is there’s a T-ring somewhere that has my name on it,” Richard said. All UT letter winners who earn their diploma qualify for a T-ring from the T-Association.

“For the past three solid years, if that T-ring is still available, I want to say to the University of Texas and all the people that helped me get back into this thing, thank you,” he said. “Thank you for the strength, the power, the understanding, love.

“Now, you can be proud of me because I did complete what you guys set out to give me.”