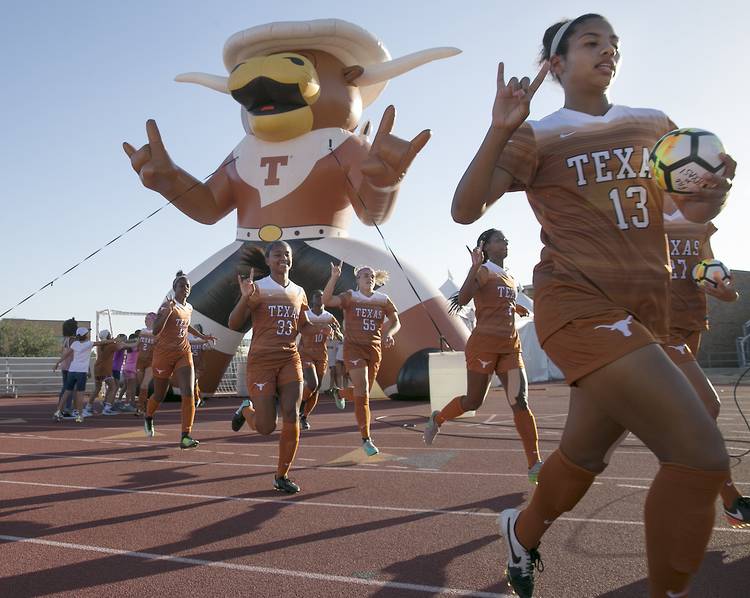 Texas forward Cyera Hintzen is getting closer to her final form. Closer, but not there yet.

She has her sights set on playing past her senior season, whether it’s in the National Women’s Soccer League or overseas. Aspirations of representing the U.S. national team, perhaps the toughest roster in the world to crack, remain.

“There are things that I need to work on,” Hintzen said. “The pace of the game is way faster up there, fitness level, technical ability. There’s always room to grow.”

All of which bodes well for the Longhorns, whose 2019 season begins on Thursday. For three years running, Hintzen has set the tone. She has 22 goals and 14 assists in that span, and has led Texas with 10 goals each of the past two seasons.

Asked for the moment when Hintzen cemented her place as the team’s leader, Kelly goes back almost two years, when Hintzen was a sophomore. Two goals, nearly identical and equally important, flash through the coach’s mind.

They’re from the same match, a 3-2 overtime thriller against Texas Tech. Hintzen scored the last two goals for Texas, both 25-yard strikes with the outside of her right foot that lodged into the top right corner of the net.

“Any championship team has a goal scorer,” Kelly said. “Goal scorers are confident, they want the ball, and they’re not afraid to take responsibility. She wants all of that.”

No, Hintzen hasn’t reached her final form, but she’s a lot closer than when she started. A highly-touted recruit from Garland, she immediately led the Longhorns in shots in 2016. Only two found the back of the net that first year, though.

“I came in as a freshman just kind of shooting everywhere, not really focusing on finishing,” she said. “There’s a difference between shooting and having a nice finish.”

Besides a bit of finesse, Hintzen’s sophomore season also saw the arrival of a sidekick, one who was already familiar. Nearly a decade after they first played together, things remain much the same for Hintzen and Haley Berg, a forward from Celina.

If a goal is scored, chances are one of them had something to do with it.

The formula rang as true as ever during the Longhorns’ first exhibition last Friday, a 5-0 victory over Air Force in which either Hintzen or Berg factored in each strike.

“Even when I first came (to Texas), it was automatic,” said Berg, now a junior midfielder for the Longhorns. “Almost like muscle memory, us two together.”

In 2018, they combined to score 16 of the team’s 39 goals while pitching in 12 of 42 total assists, numbers that landed both on the MAC Hermann Trophy preseason watch list for the award given to nation’s best player.

This season could be the last together for the Hintzen-Berg duo, who first bonded while playing for youth clubs in the Dallas area, including FC Dallas.

“It’ll be really sad, but I’m excited to see her succeed when I’m gone,” Hintzen said.

For now, they’re focused on making more memories, at the center of an attack oozing with potential. Sophomore winger Julia Grosso is fresh off a summer spent with the Canadian national team at the Women’s World Cup, and redshirt junior Cydney Billups is another year older and wiser.

Texas is ranked No. 19 in the preseason, picked to finish third in the Big 12 behind West Virginia and Baylor. After making the third round of the NCAA tournament two years ago, the Longhorns bowed out in the opening round against Virginia Tech last fall.

The message from Kelly to opponents who focus only on stopping Hintzen, Berg, or both: Beware.