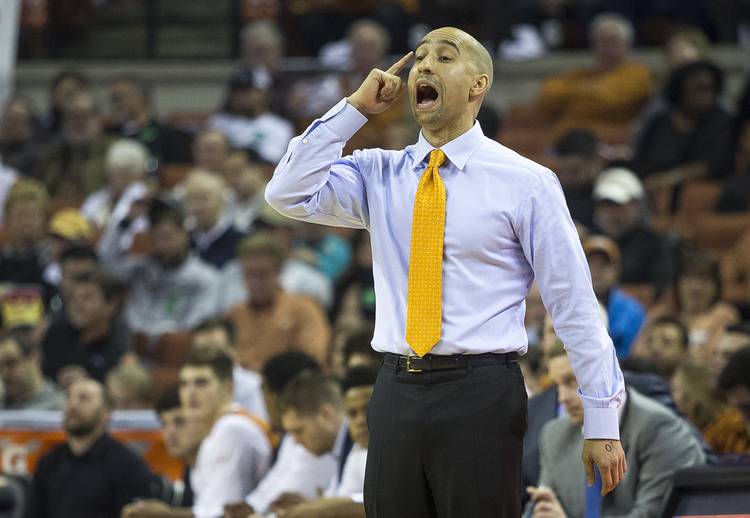 Yelling or screaming may be a satisfactory emotional release. But it won’t change the past, or the final score, either.

Texas players had plenty of frustrations about Wednesday’s home loss to Oklahoma, a 10-point decision that dropped the Longhorns to 0-2 in Big 12 play. It was the third loss in their last four games.

“I took a different approach after (Wednesday),” UT guard Courtney Ramey said. “I sent each person a text, a mini-paragraph just explaining what we need from them. That I believe in them. There are things we can all do to help our team win.”

Channeling coach Shaka Smart, Ramey said that if every Longhorn can “give up one thing that’s keeping us from who we need to be, then that’s going to help our team grow.”

Essentially, the Horns need to channel their NIT championship-winning mentality: Bleep it.

Family newspaper protocols prevent the Horns’ actual words being printed here, but you get the idea. If someone misses a shot, bleep it. If you turn the ball over, bleep it.

“We just need to let everything go,” Ramey said. “We’re a good team. OK, we lost two games in a row, it’s not the end of the world. We can still win games.”

Texas (10-4) ran up double-digit wins in non-conference playing against lesser foes. Now that league play has started, everything comes to the fore.

Smart constantly harps on the need to up the defensive intensity, but this club just isn’t putting the ball in the basket enough.

Once again, Smart’s team is ranked near the bottom of the league in scoring (66.7) but fifth in shooting (43.5%). However, opponents are shooting 40.7% against Texas, the second-highest total in the Big 12.

Texas went 3-for-16 from 3-point range in the Big 12 opening loss to Baylor. Then, the Horns were 8-for-29 from beyond the arc against the Sooners.

It’s not a team that’s particularly aggressive going to the basket, either. Texas ranks last in the Big 12 in free throws attempted (175). The nights they do get to the line, the Horns aren’t converting. Texas shoots 64.6% at the stripe, the second-worst total in the league.

“We have a group of guys right now on our team that want to win,” Smart said. “But they have to want, need and have a desperation to do all the little things that go into winning more.”

Smart said if Texas continues to shoot like it did against Baylor (34.6% overall) and Oklahoma (37.5%), then “it certainly creates a smaller margin for error.”

“As I just told Matt (Coleman), I mean, you guys are Big 12 players,” Smart said. “You guys are guys that made shots before and made plays before. And, you got to flat-out go out and do it.”

Smart has tried to change the lineup. He’s inserted Andrew Jones and Kamaka Hepa into the starting five for a change of pace.

Hepa, a 6-9 sophomore, is a long-range threat, but he’s passed up a few open shots the last two games. Against OU, Hepa drove all the way to the rim, passed up a layup opportunity and found an open teammate at the top of the key. The result: Another missed 3-pointer.

Hepa said the key right now is for Texas to continue “staying true to our work that we’ve put in the last five- or six-month span.”

Every game at this point is a must-win scenario.

“Obviously starting conference play with two losses does kind of get a little more important, you could say,” Hepa said. “But every game we want to go in and win, and that’s the same mindset we have going in against Kansas State.”

If Texas can’t right the ship against K-State, things won’t get any easier. UT goes to Oklahoma State next Wednesday and then comes back home to host Kansas on Jan. 18.

The analytical computer models did not like that OU loss, either. Texas is now projected to go 6-12 in league play, according to Kenpom.com.

Rome wasn’t built in a day, as one UT athlete said recently. But Texas can get back moving in the right direction with a win Saturday at the Erwin Center.

“Panic time? No, I wouldn’t say we need to panic,” Ramey said. “There’s a lot of games left to be played. And we know we haven’t bee playing our best basketball. There are easy fixes. It comes with confidence and going out and believing we can win each and every game.”