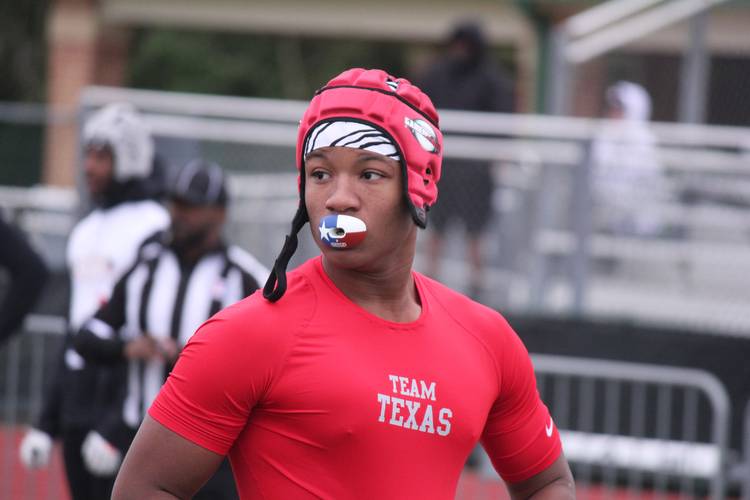 A pair of sophomores on Texas’ radar impressed Saturday in Houston at the Pylon 7-on-7 East Texas Classic. The Longhorns are notoriously slow to offer, which in contrast to the new fast-paced recruiting world. It allows Tom Herman to be picky in his evaluations and rely less on uncommittable offers. It’s not hurting the Longhorns on the recruiting trail, evidenced by its third-ranked class in 2018 and the start of the 2019 class.

One of the 13 sophomores to currently hold an offer from Texas is Darius Snow, a defender from Hebron Carrolton. The 6-foot-2, 210-pound prospect is listed as a safety, but looks more like a future star at outside linebacker. He’s one of two safeties with an offer and only one of seven in-state sophomores with a current offer.

Snow already holds offers from programs like Alabama, Stanford and Georgia. He’ll be a member of the Fabulous 55 in the 2020 class whether he stays at safety or moves to outside linebacker as he continues to grow. Snow would prefer to remain a safety.

“Recruiting is going great. Everyone is showing love and there are a few schools I want to see soon or in the summer,” he said Saturday afternoon at the 7-on-7 tournament. “I don’t have a top five but there are a couple of schools like Texas, Alabama and Stanford that stand out because I’ve followed those programs.”

Texas is recruiting Snow as a safety and assistant coach Craig Naivar is leading the sophomore’s recruitment. The Longhorns signed a trio of elite safeties in the 2018 recruiting class and hope to pull the same trick in the current cycle. That isn’t stopping Naivar from building an early relationship with one of next year’s top priorities.

“Coach Naivar is one of the main reasons I like Texas,” Snow said. “And they use six defensive backs. It doesn’t get any better than that.”

Round Rock wide receiver Collin Sullivan is a sophomore yet to receive an offer from the Longhorns, though it is safe to presume he’s on the radar of Herman and wide receivers coach Drew Mehringer. Sullivan, a big-bodied receiver with vertical speed, visited Texas on junior day and is a frequent guest on campus because of his proximity.

There is a long way to go until the 2020 class can sign, or even take official visits, so Sullivan is concentrating on preparing for upcoming spring football at Round Rock by playing 7-on-7 at showcases around the state.

It’s fun to come to these things and get to know all the players. It helps with the nerves. It’s about having a good time and competing,” he said. “The confidence improves with experience. I’m an upperclassman now and that means more pressure to be a leader.”

Sullivan knows he’s one of the top wide receiver prospects in Texas, if not the nation, for the 2020 cycle. He’s getting to watch peers like Garrett Wilson, Jaylen Ellis and Elijah Higgins go through the recruiting process as juniors. Sullivan gets to learn how to handle recruiting, and how to remain unsatisfied despite rankings, offers or reputation.

“There are always things to work on and I know I’m not close to where I want to be. I want to be ready for college and I can literally improve on everything in my game,” Sullivan said. “My physicality and getting off the defensive back has improved. That is one thing 7-on-7 helps with because the defensive backs can jam and get physical.”