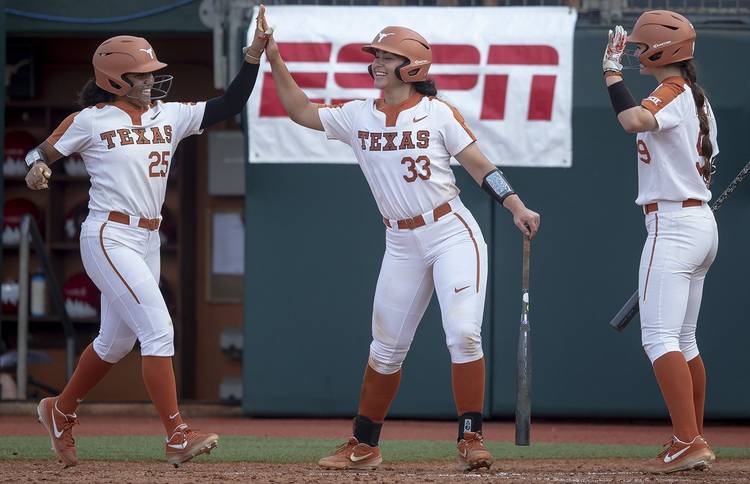 Miranda Elish’s arm, Kaitlyn Washington’s bat and the Texas Longhorns are all heading to Alabama.

Washington jump-started UT’s offense and Elish closed out a long weekend with a shutout of Houston in a winner-takes-all regional game at McCombs Field. With the 7-0 triumph on Sunday evening, Texas became only the fifth team since 2009 to win a regional after losing its opener. Texas also accomplished the feat in 2012 and so did Oklahoma (2017), Tennessee (2012) and Jacksonville State (2009).

Houston senior Presley Bell had a one-hitter going over the evening’s first four inning but Washington eventually woke up the Texas offense. With one out in the fifth inning, Washington drove an offering from Bell to the deepest part of McCombs Field. The solo shot was UT’s fourth homer of the tournament.

Postseason highlights are nothing new for Washington. Last season, she was 7-for-9 over three games at the Seattle regional. During her freshman year, she won a regional game against Texas State with a three-run double.

Washington, however, had only one hit over the first 13 at-bats of her 2019 postseason. After a second-inning groundout, Washington felt she had gotten on top of a ball thrown by Bell.  She looked to get under one of the right-hander’s next pitches and did just that.

“It kind of gets me going for the rest of postseason,” Washington said. “I really just did it for my team.”

Two innings later, Washington gave UT a 2-0 lead with a run-scoring single. That hit opened the floodgates. Texas went onto score five more times in the seventh session, and the team collected seven of its 10 hits in the inning.

UT’s offensive outburst came hours after Texas forced a final game by scoring all of its runs in the third inning of a 5-2 win over the Cougars.

“If you look at their success probably in the last 20 games, they rely heavily on big innings,” Houston coach Kristin Vesely said. “They had two really big innings and it put it a little bit out of reach for us. I think we could have done some things differently to eliminate those big innings.”

One of UT’s seventh-inning hits belonged to Elish, who had a two-run double. The at-bat was only Elish’s third since UT’s loss to Sam Houston State on Friday. Elish entered the NCAA tournament with a .322 batting average and the team’s second-most homers, but Texas needed her focus elsewhere.

Once again, Elish made her impact in the pitcher’s circle. The all-conference honoree had thrown 229 pitches over two wins on Saturday. In Sunday’s first showdown with Houston, Elish hurled the softball 106 times.

Elish capped her weekend with a 94-pitch shutout. She allowed four hits, struck out six batters and did not issue a walk until the final inning. One of the two Cougars that reached second base was stranded in the fifth inning when Elish struck out Sarah Barker, the American Athletic Conference’s Player of the Year.

When asked at a postgame press conference about her strikeout of Barker, Elish didn’t have much to say. At this point, Elish admitted that “it’s a blur.” After some prodding, Elish recalled waiting for White to call a down-and-in pitch during that sequence. That request was finally granted and Elish’s 410th pitch of the weekend was perhaps her biggest.

“You nailed it. You nailed the pitch, that was the key,” White said with Elish sitting next to him on the podium.

Around the bases: Houston ends its season with a 39-19 record. … Ki’Audra Hayter recorded her team-leading 14th steal in the win. … UT catcher Mary Iakopo and Washington both had two hits. … All-time, Texas is 2-3 against Alabama. The Longhorns lost two of those game in a 2009 regional in Tuscaloosa.