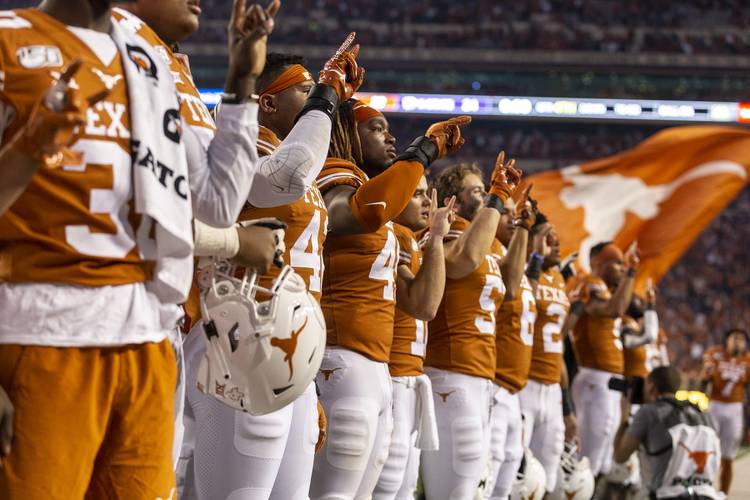 History doesn’t repeat itself, but it often rhymes.

Last season, Texas was 7-3 going into a must-win game against Iowa State. The Longhorns got past the 18th-ranked Cyclones and cruised to the Big 12 championship game.

Fast forward to this week. Texas is 6-3 going into a must-win game at Iowa State if the Longhorns hope to reach the Big 12 championship game.

It’s reached that time of year where all the week-long talk is superfluous. Just survive and advance on Saturday.

“Excited about the win, obviously. Much needed,” Texas coach Tom Herman said of last Saturday’s 27-24 win over Kansas State. “Part of being on the ropes is you don’t get off of them with one game, just one win.”

Monday press conferences at UT can be tense, explosive affairs after losses. Or coaches use them for victory laps. By that scale, Monday’s was a snoozer, which isn’t necessarily anybody’s fault.

It’s because UT’s situation hasn’t really changed, especially as it relates to getting back to Arlington. Last week’s critical game against K-State gives way to this week’s do-or-die affair in Ames, Iowa. And so on and so forth. The only other notable action this week is happening in Waco; if Oklahoma can defeat Baylor, then Texas can leapfrog coach Matt Rhule’s club in the standings with its own win in Waco on Nov. 23.

First comes a treacherous trip into America’s heartland, where you’re likely to trip over a presidential contender these days. Just don’t get tripped up by the Cyclones.

“I don’t know what their attitudes in Ames are toward Texas. I’m worried about Texas, to be honest with you,” said Herman, who was the Cyclones’ offensive coordinator from 2009-11 before moving to Ohio State. “But when I was there, every game was big.”

The Cyclones (5-4, 3-3 Big 12) have beaten the Horns only twice in 16 attempts throughout history. The first came in the now-famous 2010 matchup when Herman directed the offense past Will Muschamp’s Texas defense in Austin.

The second came in 2015 on Halloween night. The Horns had seven three-and-outs, went 2-for-13 on third-down conversions and didn’t cross Iowa State’s 47-yard line until the third quarter. Iowa State cruised to a 24-0 win at Jack Trice Stadium.

Texas has won the last three games all by double figures.

All four of the Cyclones’ losses this season have been nail-biters. Iowa State lost by one to No. 19 Iowa, by two to Baylor, by seven to Oklahoma State and by one to No. 9 Oklahoma. The Sooners had to stop a 2-point conversion attempt to escape last weekend in Norman.

“They probably feel like their backs are against the wall a little bit, too,” Herman said. “We’re going to have to prepare even better this week than we did last week.”

Herman did have a mixed injury report. Starting right guard Junior Angilau will miss this week’s game with a strained medial collateral ligament knee injury. Receiver Collin Johnson also had another hamstring injury, the same issue that kept him out of three games but “not as bad.”

Junior defensive back Chris Brown, who has missed the last three games, has been cleared to practice with a cast on his injured forearm.

Linebacker Jeffrey McCulloch, safety DeMarvion Overshown and running back Jordan Whittington were all thought to be on track to play against Kansas State. None did.

Echoing comments he made Saturday, Herman again stressed that fans should be leery of any reports about internal strife. “If you want proof of how this team is doing, watch the game,” he said.

For two-plus seasons, Herman has stressed that the “only opinions that matter” are the ones inside the football building. On Monday, he said the outside noise “can be a bit louder here than a lot of places.”

“So that was it, just hopefully our fans can be cautious with what they choose to believe,” he said.

Believe this: Iowa State’s Brock Purdy is the most dangerous passer in the Big 12. He leads the league with 2,849 passing yards and has 20 touchdowns this season. Six different opposing quarterbacks have set new career highs in passing yardage just by facing the Texas secondary. Purdy ranks sixth nationally in passing efficiency.

“Last year when he kind of burst on the scene,” Herman said, “you could tell he had a lot of moxie.”

Forecasters are predicting temperatures to be in the high 30’s on Saturday. Herman said the Horns will practice outside in Austin on Tuesday, when it’s supposed to be in the mid-to-high 40’s.

“As long as you don’t let it be a distraction, I don’t think it affects what you do from a game-play standpoint,” Herman said Monday on the Big 12 conference call.