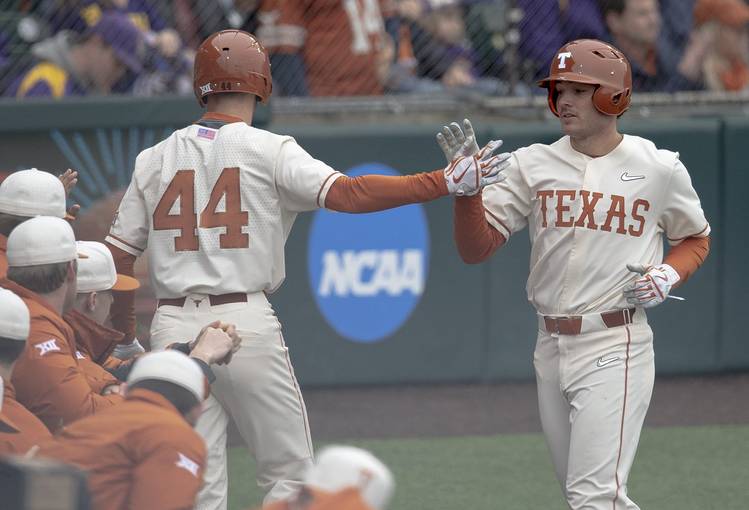 For Texas’ baseball team, the month of March ended the same way it began.

At UFCU Disch-Falk Field on Sunday, Texas senior Tate Shaw doubled home two teammates in the ninth inning of a 6-5 victory over Xavier. Texas beat the Musketeers by the same score on both Friday and Saturday. The series sweep of Xavier featured walk-off doubles as bookends.

Texas opened March with a three-game sweep of LSU at home.

Texas (20-11) led for much of Sunday, but Xavier (9-18) scored twice in the eighth inning before taking a 5-4 lead in the ninth inning. Xavier reliever Taylor Williams then retired the first two batters he faced during UT’s final at-bat.

Down to its last out, Texas got a single from freshman Lance Ford. Senior catcher Michael McCann, who was an injury substitution in the eighth inning, then drew a walk. That set the table for Shaw, who worked a 2-1 count before crushing a ball off the wall in right-center field.

“I thought it was gone, actually,” Shaw said. “But the wind, I got no juice. I knew the game was over.”

This was one of Shaw’s finest moments in a Longhorn uniform. A graduate of nearby Westlake High and the younger brother of former UT outfielder Collin Shaw, Shaw was a steady defender in the Texas outfield during the 2017 and 2018 seasons. With the addition of freshman Eric Kennedy to this year’s roster, Texas moved Shaw to first base.

“When you look at the label of ballplayer, that’s what he is,” Pierce said. “He’s not flashy. He’s a good runner, not a great runner. He has a decent arm, not a great arm. But he believes in himself and he’s tough as nails. If you can get that kind of guy with confidence, then you’ve got a ballplayer that you want on your field every day.”

During the postgame celebration, Shaw was hit by shaving-cream pies by both Ryan Reynolds and Duke Ellis. Two days earlier, Ellis’ two-run double in the 12th inning was the decisive swing in a walk-off win. That series opener also featured a game-tying single by Ellis with two outs in the 10th inning.

“We never give up in the dugout,” Ford said. “Even when we got down to two outs, we knew that it just takes a couple knocks to get it going.”

Texas grabbed an early lead on Sunday by taking advantage of an ineffective start by hard-throwing junior Conor Grammes, a right-hander who was 1-5 with a 7.33 ERA. Ellis led off the game with a single, but UT’s three runs were scored in the inning on a groundout and two bases-loaded walks. Grammes needed 41 pitches to survive the inning. He walked five Longhorns, threw a wild pitch and was called for a balk.

Opposing Grammes was Texas freshman Coy Cobb, who allowed five hits and one earned run over seven innings. Cobb was making his seventh start, but he reached the sixth inning for only the second time. A collapse by the UT bullpen cost Cobb his first collegiate win but his eight strikeouts were a career-high.

Around the bases: Texas will host rival Texas A&M (23-6-1) on Sunday. In its most-recent poll, D1Baseball ranked A&M and UT 10th and 13th. … Freshman Caston Peter injured his finger during a seventh-inning at-bat, and Pierce said “I think he’s going to be out a while.” That leaves McCann as Texas’ only healthy catcher. … Shaw also drew his fourth bases-loaded walk of the season. … Redshirt freshman Cole Quintanilla pitched the final 1 1/3 innings and was credited with his second win.