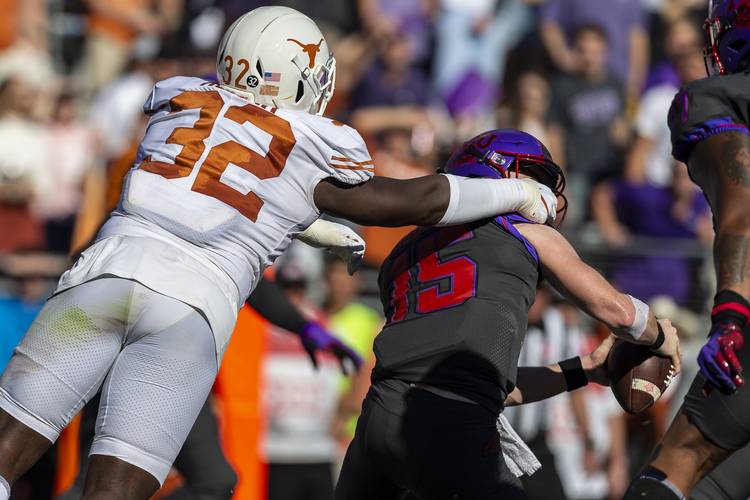 Texas defensive back Malcolm Roach (32) tries to tackle TCU quarterback Max Duggan (15) in the first half of an NCAA college football game in Fort Worth, Saturday, Oct., 26, 2019. [Stephen Spillman for Statesman]

Revisiting our five pregame questions that were facing the Longhorns ahead of Texas’ 37-27 loss to TCU on Saturday.

It looked like Keaontay Ingram was on his way there — he had 60 yards at halftime, on 11 carries — but the Longhorns relied more on the pass than the run in the second half. He finished with 71 yards on 16 carries. Ingram had 114 yards against Oklahoma State and 101 against Kansas, and Roschon Johnson put up 121 at West Virginia and had 95 against Oklahoma.

2. Did Texas turn Max Duggan into a one-dimensional threat?

Duggan made plays with his arm and legs, connecting on three deep shots in the second  half, all of which led to touchdowns. And his 11-yard touchdown run in the final minutes sealed the win. Duggan’s threat as a runner shouldn’t be a surprise; the freshman was coming off a 115-yard rushing performance against Kansas State. He finished with 13 carries for 71 yards and a touchdown. Two quarterbacks — Oklahoma’s Jalen Hurts (131 yards) and Oklahoma State’s Spencer Sanders (109 ) — have run for more than 100 yards against the Longhorns.

3. Did Texas avoid any costly turnovers?

Sam Ehlinger threw a career-high four interceptions, and the last two were costly. The third came on the final play of the third quarter as the Longhorns were driving, down 27-20. And the fourth was on Texas’ last-gasp drive in the closing minute. For the most part, Texas has limited its turnovers this season. The Longhorns have now lost the football 11 times. The Oklahoma State and Kansas games may not have been as close as they were had those teams not turned three fumbles and an interception into four touchdowns. New Mexico State is the only team that had forced fewer than TCU’s five heading into Saturday’s games.

4. Did any Fort Worth-area Longhorns shine?

Byron Vaughns, a redshirt freshman linebacker from Fort Worth Eastern Hills, forced a fumble on Saturday. He was coming off a breakout performance in the 50-48 win over Kansas, when he had eight tackles.

5. Did Texas avoid another embarrassing showing in Fort Worth?

The four-turnover day ended with a costly loss for Texas in its chase to return to the  Big 12 championship game. The Longhorns dropped to 2-6 against the Horned Frogs since TCU joined the conference in 2012, and have now lost their last three games at TCU. The previous two trips to Cowtown were disastrous; Texas is just four years removed from a 50-7 drubbing, which is the team’s most lopsided loss in the last 15 seasons, and the 24-7 loss in 2017 remains the only game that UT has lost by more than 14 points in the Herman era.