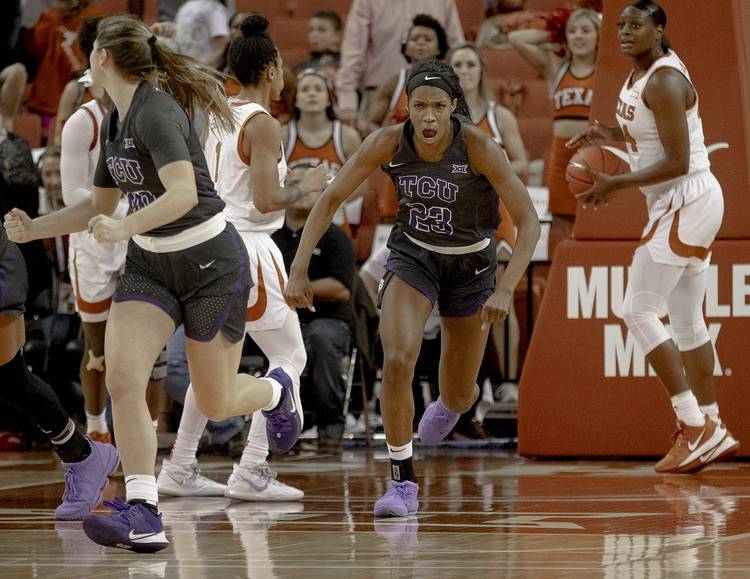 Three days into the new year, the Texas Longhorns have a set of resolutions to work on.

Michelle Berry’s putback basket with 6.7 seconds remaining was the difference in TCU’s 65-63 upset of Texas on Friday. In what was the conference opener for both teams, TCU secured its fourth-ever victory over UT.  It was also TCU’s first win in 22 trips to Austin.

TCU was led by the 26 points scored by junior guard Lauren Heard. The Longhorns, though, had plenty of blame to shoulder.

Texas turned the basketball over 18 times at the Erwin Center.

UT missed 21 three-pointers, its worst showing since a 9-for-32 effort against Tennessee in 2010.

With the loss, the 25th-ranked Longhorns will likely drop out of the Associated Press’ poll on Monday. Texas (8-5, 0-1 Big 12) had won four straight games. Included in that winning streak were beatings of No. 1 Stanford and No. 17 Tennessee.

“We have another game coming up so we can’t be down on ourselves for too long,” said senior guard Sug Sutton, whose team will travel to Iowa State on Monday. “We just have to move on and get better as a team and just focus on what we need to do to win the next game.”

After TCU (10-2, 1-0) led by as many as nine points in the fourth quarter, a resilient Texas team managed to twice tie the game. UT even took a two-point lead on Lashann Higgs’ three-pointer in the final minute. With the score tied, an undetected Berry then cleaned up a miss by Heard to put TCU ahead for good.

Berry finished the game with 15 points and 11 rebounds. Her score off an offensive rebound at the end of the first quarter gave TCU a 13-12 advantage.

“She could have dunked that. She was so high up there,” said TCU coach Raegan Pebley of Berry’s decisive play.

Texas called a timeout after Berry’s basket and had a chance to win, lose or tie the game. But Sutton was called for a travel — her sixth turnover of the second half — as she drove to the basket.

“I was supposed to go downhill. It didn’t work out,” Sutton said.

Texas led 32-27 at halftime, but TCU opened the third quarter on a 10-2 run. In the session’s second half, the Horned Frogs took control of the scoreboard with points on four straight possessions. Three of TCU’s baskets were three-pointers. Meanwhile, the Longhorns shot 4-for-14 in the frame.

“I’m really disappointed in how we played in the third quarter,” Aston said. “That’s the reason why we lost, not the last play of the game.”

Higgs led Texas with her 14 points while senior Joyner Holmes contributed 12 points and 13 rebounds. Holmes, however, had to miss the final 13 minutes of the first half because of foul trouble. Sophomore Charli Collier, who is the only other Longhorn taller than six feet, was pulled after picking up her second foul with 7:46 left in the second quarter.

With its bigs sitting, Texas played eight different players. Five of those Longhorns scored as Texas maintained the five-point lead it had upon Collier’s departure.

Notes: TCU senior guard and Bowie High graduate Kianna Ray had five points and seven rebounds in her final homecoming. Members of Bowie’s girls basketball team were among the announced crowd of 3,502… Texas shot 35.4% from the field while TCU’s shooting percentage was just a tick better at 35.9%. … Heard’s older brother, Jerrod, played football at UT. Only two players —  Arizona’s Aari McDonald (44 points) and UTRGV’s Trelynn Tyler (29 points) — have scored more against Texas this season. … Sutton finished with 10 points and a tea-high five assists.