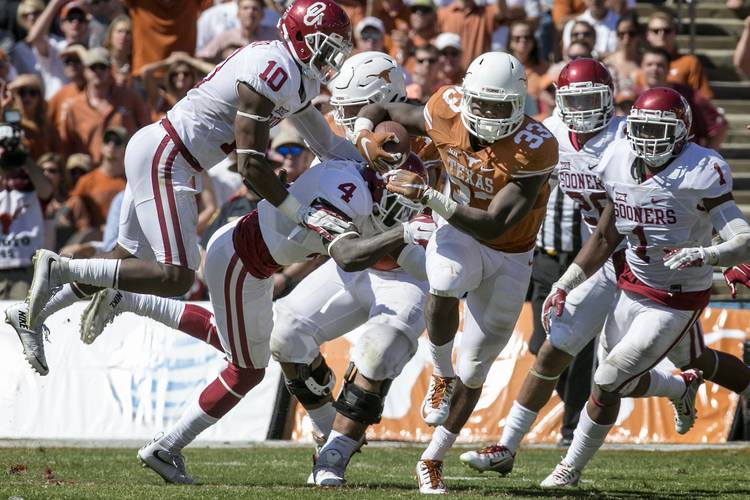 Freshmen Kirk Johnson and DeShon Elliott did not play in the first five games, and the decision to remove their redshirts was validated on the kickoff after Texas went up 7-0. Elliott reached in and dug out the ball from Alex Ross, who burned Texas for a touchdown return last year. Officially, Kevin Vaccaro, who was bringing down Ross from behind, was credited with the strip, but it should’ve gone to Elliott. Johnson was on the spot for the recovery, and the short field led to a stunning 14-0 lead. It seems only a matter of time before Elliott carves out a role at safety, where depth is thin behind starters Dylan Haines and Jason Hall. A major get for the Longhorns, Elliott was hurt early in camp and is just now getting into the mix. Johnson, on the other hand, was a surprise participant. With Johnathan Gray and D’Onta Foreman carrying the load, it’ll be hard for him to get touches in the backfield, so he may be limited to special teams.

At first glance, it looked like Baker Mayfield airmailed a third down pass in the end zone. The ball was a bit high, but the bigger issue was Dede Westbrook’s stumbling and taking himself out of position for the catch. Westbrook had beaten Holton Hill on an inside slant. With three chances from the 4-yard line, OU went nowhere before kicking a field goal to cut the lead to 14-3. After getting humiliated at TCU, Texas’ defense bounced back in a big way.

It was so much more than a 2-yard carry. With about three minutes to go before halftime, Texas started a drive at its own 3, and seven Johnathan Gray carries later, everyone was headed for the locker room. On third down, Gray lunged forward, and the chain gang confirmed he got the two yards needed to extend the possession. Had he come up short, OU would’ve gotten the ball back with nearly two minutes to chew into an 11-point deficit. Later in the drive, Gray converted another third-and-2. It was a big series that can easily be overlooked by flashier plays.

Once again, OU couldn’t keep Texas pinned deep. On the final play of the third quarter, D’Onta Foreman took a speed draw 81 yards for the longest non-TD run by a Longhorn since Earl Campbell in 1976. OU missed two tackles, but that’ll happen against Foreman, a 240-pound back that runs hard. Sideline reporter Todd McShay advocated for Foreman to supplant Gray as the No. 1 option, suggesting there’s “a big difference” when Foreman’s in the game. Chris Spielman, who called Texas games the past two weeks, said Foreman “will get stronger as the game goes.” Foreman crossed the century mark for the second week in a row with 117 yards on nine carries.

Trailing by seven, Mayfield opened a fourth-quarter drive with completions of six and 12 yards. The Sooners were moving along, and then they stopped, when Malik Jefferson blew by left tackle Orlando Brown and dropped Mayfield for an 8-yard loss. It was Jefferson’s second sack, propelling him to Walter Camp FBS defensive player of the week honors. He’s the first Longhorns defensive player to win that honor. Pressure continued from Texas, and on third down Naashon Hughes beat Brown and collaborated with Poona Ford for Texas’ sixth sack of the day. The Sooners punted and never got the ball back.