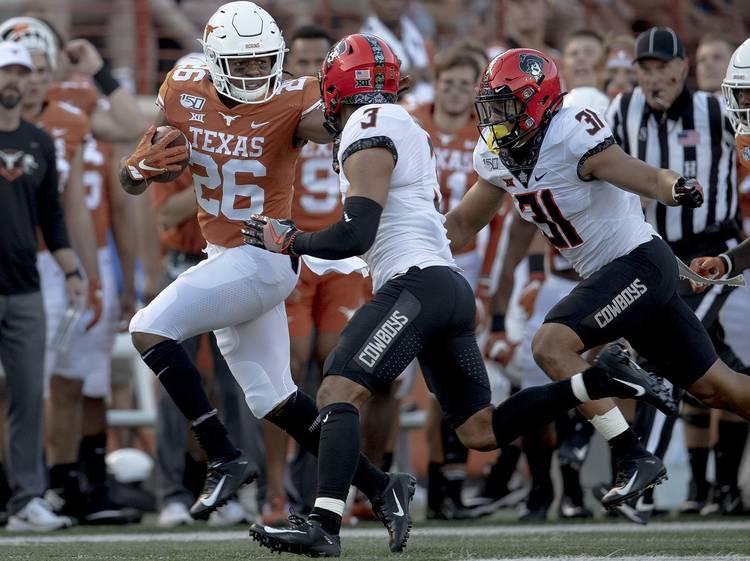 Revisiting our five pregame questions that were facing the Longhorns ahead of Texas’ 36-30 win Saturday night.

1. Did Sam Ehlinger throw an interception?

It came on a tipped pass over the middle that was corralled by a safety, but a pick is a pick. Still, this one didn’t have nearly the impact as the last one Ehlinger threw against the Cowboys at Royal-Memorial Stadium — a pick in the end zone in overtime to seal a 13-10 loss in 2017. The junior’s decision-making has improved drastically from that afternoon two years ago; last year he set a Big 12 record by throwing 308 straight passes without one. For the season, Ehlinger is 102 of 140 for 1,237 yards, 15 touchdowns and the one pick.

Hubbard. But only marginally.

The nation’s leading rusher came into DKR averaging 173.7 a game against the likes of Oregon State, McNeese and Tulsa. He got his 100-yard game, but it wasn’t easy. He finished with 121 yards on 37 carries, an average of 3.3 yards per run. And Tylan Wallace shredded the Horns in Stillwater last year (10 catches for 222 yards and 2 TDs) but was held to five catches for 83 yards and no scores tonight. Those two players combined for 302 yards and two scores in last year’s 38-35 OSU win.

3. Did any Longhorn record at least two quarterback sacks?

Texas sacked redshirt freshman Spencer Sanders twice, one from linebacker Joseph Ossai and one from linebacker Juwan Mitchell. In three of the previous five Texas-OSU matchups, a Longhorn had produced a two-sack game (Malcom Brown in 2014, Jason Hall in 2016 and Beckyn Hager in 2017). Sanders had been sacked only twice in the first three games.

And that has been a bit of a rarity during Tom Herman’s two-plus years at Texas. There had been only four 100-yard rushers since the start of the 2017 season, and two of those came from a quarterback. Keaontay Ingram had his best game yet this season, rushing for 114 yards on 21 carries, an average of 5.4 yards. The Longhorns opened the game by running the ball on 16 of their first 20 plays. The Cowboys allowed a 100-yard rusher last week as well.

5. Did Texas win — and thus snap two losing streaks to the Cowboys?

Oklahoma State had won four in a row over the Longhorns. And the Cowboys had won their last five games at Royal-Memorial Stadium, the best streak every by any UT opponent. Herman said after the game that neither of those streaks had been discussed during the week. If that’s true, they might have been the only ones not talking about it.