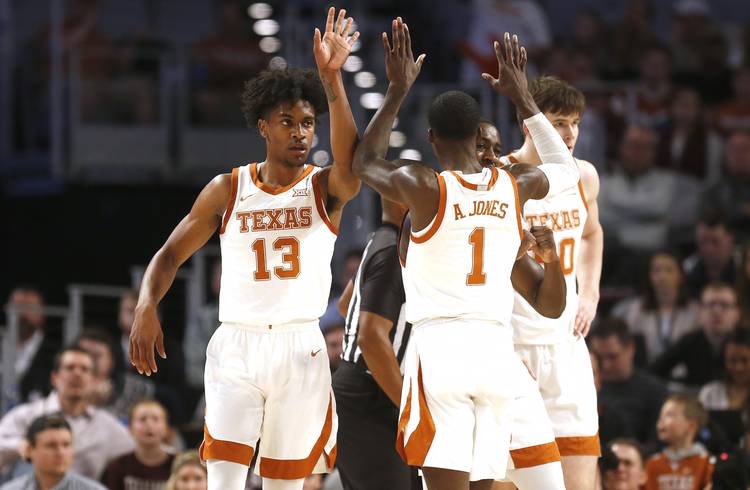 FORT WORTH — Texas A&M’s yell leaders wore their customary white suits, and the crowd hissed whenever “t.u.” did something they didn’t like.

Those faint “Admission scandal!” taunts from A&M students — an obscure reference to the Texas men’s tennis team — were half-hearted at best. After all, the Longhorns are the reigning NCAA national champions in that sport.

Texas fans, as is their custom, did what they used to do whenever playing A&M.

They cheered when Jase Febres hit two 3-pointers that turned a six-point game back in UT’s clear favor. And they came leaping to life when Kai Jones threw down a vicious alley-oop slam with 4 minutes, 18 seconds remaining.

Yes, it seemed like old times Sunday at the new Dickies Arena here in Cowtown. There wasn’t a single “S-E-C!” chant all day. Just the state’s two biggest flagship schools battling it out on the hardwood, the way they used to do for decades.

Texas won 60-50 in front of 9,136 fans. The Horns (8-1) had some strong defensive moments, and it’s clear their transition game is coming along. The Aggies (3-5) had 21 turnovers and left the right corner open a tad too much.

This was their first regular-season matchup since November 2015. It felt like a day that should be repeated again next year. And the year after that.

“I would definitely love to play them every year,” A&M freshman Emanuel Miller said.

“As players, we want to play against Texas,” he said. “The fans want to see that. I feel like it’s definitely good for both schools, good for the state. Just a good college basketball game.”

Maybe the two schools will agree to a home-and-home series. Or move it around the state. Take it to Dallas, Houston or San Antonio. It’s up to both coaches: UT’s Shaka Smart and A&M’s Buzz Williams.

“It certainly takes on a different feel if you’re playing on campus,” Smart said. “That’s not something I’m against. It’s definitely something we can talk about, if that’s something Coach Williams wants to do.”

Williams noted how Dickies Arena opened with a George Strait concert and said he sure wasn’t coming back if “I don’t get tickets to see George.”

“I’m not exactly sure how all of this worked. By the time I got the job, I think it was already kind of in the works,” said Williams, now in his first season. “But I thought it was great. I thought the arena was great. I think playing them is great. I felt like it was a rivalry. I think it’s good.”

Forget concert tickets. As it stood, Williams would’ve just accepted better perimeter defense. Febres was 4-for-11 from 3-point range and had a game-high 17 points. His two shots sandwiched a dunk from Jones that gave Texas a 45-33 lead.

Febres needed the pick-me-up given his streaky ways of late. The Horns need their junior to find a shooting rhythm this month, too. Febres said he has recently been having talks with Smart and has gone back to meditating.

“Not a lot of teams help off the corner,” Febres said of A&M’s defensive plan. “I guess that was their game plan. You do that, I’ve got to come in and make you pay.”

This came after the Aggies had found a little mojo. Nebo, a terrific shot blocker who swatted away three, just posterized UT’s Royce Hamm Jr. with a dunk. That got A&M within six. Miller scored and Nebo scored again, two buckets via sheer hustle, and the Aggies had to feel good.

Febres’ shots negated all that momentum, though. Kai Jones’ run-out dunk off a little back-and-forth with Andrew Jones silenced the A&M faction for good.

“I had to reward the big fella,” Andrew Jones said. “He’s so anxious to get the ball and dunk. So all right, I’m telling him to slow down, give the ball up. I will give it back to you. I promise you. He trusted me, and we had a highlight play.”

Andrew Jones hit a 3-pointer with 3:23 left, and former A&M great Acie Law IV just leaned back in his seat knowing it was all but over. Nebo finished with a team-high 16 points as the Aggies shot 47.6% overall.

This was Andrew Jones’ first chance to play in front of extended friends and family from Irving since his leukemia diagnosis. His immediate family members are regular attendees for games at the Erwin Center. His cheering section for this one was quite loud.

This game, the pairing of the two schools, still means a lot to a lot of people, no matter how stubborn university leaders want to be about football.

Williams gave some gobbledygook about strength of schedule factors that determine whom the Aggies can play before SEC play begins. Hard to fathom how playing a Big 12 school hurts anyone’s NCAA Tournament analytics.

“We’re trying to get ahead on that, relative to the future, so that we can get the timing of it the way we want,” Williams said.

For now, Texas and Texas A&M fans will go their separate ways.

“It would definitely be cool to play them every year,” Nebo said. “It’s a great rivalry game.”