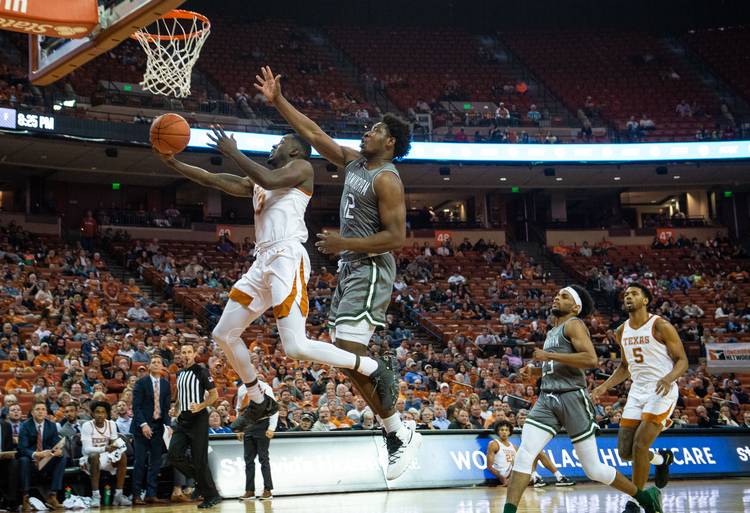 University of Texas guard Courtney Ramey (3) attempts a basket during Tuesdays game, Dec. 3, 2019, in Austin at the Frank Erwin Center. University of Alabama at Birmingham forward Will Butler (12) attempts to block.[Angela Piazza for Statesman]

These non-conference games against mid-major opponents on random Tuesdays in December have typically been the ones that give Texas the most trouble.

UT-Arlington, Kent State, Radford, Virginia Commonwealth — that’s actually quite a long list — all strolled into the Erwin Center in recent seasons and did a number on Shaka Smart’s teams.

Alabama-Birmingham happened to be in town on this particular Tuesday. Losing to UAB just hours after all the UT glitterati turned out for the Moody Center groundbreaking ceremony would not have been ideal.

So, Courtney Ramey started things off by hitting two 3-pointers. Andrew Jones followed along and hit a career-high six from downtown. Kai Jones played some electric defense, and the Horns ran up a 17-point lead in the first half.

Texas notched a 67-57 win that won’t be particularly memorable a week or month from now. But that W will look good in the win column come March. The Longhorns (7-1) are getting a lot of Ws early this season as Smart’s club appears to be gathering momentum.

“Every team in the country is good. Every team is capable of beating anybody,” Andrew Jones said after piling up a game-high 20 points. “We’ve got to have the maturity and the level of aggression to go out there and attack any team whether it’s a mid-major of the No. 1 team in the country.”

That mentality will get tested Sunday when Texas faces rival Texas A&M at the new Dickies Arena in Fort Worth.

“As long as we’re consistent with our attack and our mindset,” Andrew Jones said, “we can compete with anybody.”

Consistent. That’s an interesting word, for sure. The Horns haven’t exactly been a consistent shooting team but it’s a club that’s finding ways to win.

They made winning plays at Purdue on the road against a name foe. Andrew Jones, Jase Febres and Ramey all had good individual moments to close out McNeese State, a lower-level team that doesn’t stir anyone’s passions. So far, the only real stinker has been the second half against Georgetown, a true learning experience.

UAB charged out of the locker room after halftime with an 8-0 run. But the home team held tough and wound up shooting 49% overall for the game.

Texas had a six-point lead after UAB’s Tyreek Scott-Grayson drilled a 3-pointer with 14:03 remaining. The Horns moved the ball around and couldn’t find an open shot. Finally, Andrew Jones unleashed a 3-pointer just as the shot clock expired that splashed true.

Later, he hit another trey, giving Texas a 10-point lead. Febres got one to fall, making it an 11-point game. Jericho Sims scored on a layup inside, and suddenly Texas’ lead was back out to 12. Little by little, the Horns put it away.

UAB coach Robert Ehsan said Texas was an “offensively streaky shooting team,” a spot-on observation from the scouting report. “We were hoping we would get the team that shot it against McNeese,” Ehsan said.

Kai Jones, the 6-foot-11 freshman, is the one who really turned heads with his defensive tenacity. He clogged up passing lanes, had three blocks, forced UAB to throw it away for a silly turnover and went skyward for a dunk. He’ll get more playing time as December rolls on.

“He adds a lot more athleticism, rim protection,” Ramey said. “He’s just being himself, flying all over the court. He’s still young and he doesn’t really know what he’s doing, but he’s playing hard. A lot of good things are going to happen.”

There are good things happening with this group. Some are just not blatantly obvious.

Matt Coleman III was 2-for-8 shooting against the Blazers, but once again, he did smart things elsewhere. Coleman has four assists and four steals even though Smart could tell his veteran guard “was not fresh as a daisy tonight.”

“Matt’s been working his butt off,” Smart said of Coleman, who grows as a team leader behind the scenes with each passing day.

At closing time, Andrew Jones rolled across the lane, beat his man to the block and drew a charge. On one of UT’s final possessions, Jones could’ve pulled up for a heat-check 3-pointer but passed it up. “We had a set play that we wanted to get into, so I didn’t want to be too trigger happy,” he said.

Coleman and Jones give Texas two veteran cornerstones. Ramey is ultra-competitive, if somewhat out there with odd turnovers. Febres, on Smart’s explicit orders, is going to keep shooting 3-pointers be they good, bad or indifferent.

Texas has pieces Smart can work with. Getting them to all fit together is the eternal struggle.

“We just got to continue to get better,” Smart said. “It’s Dec. 3, and four weeks ago we opened up against Northern Colorado. We won seven out of eight games, but we’ve not yet played a complete 40-minute game. There’s probably a lot of teams out there that can say that.”