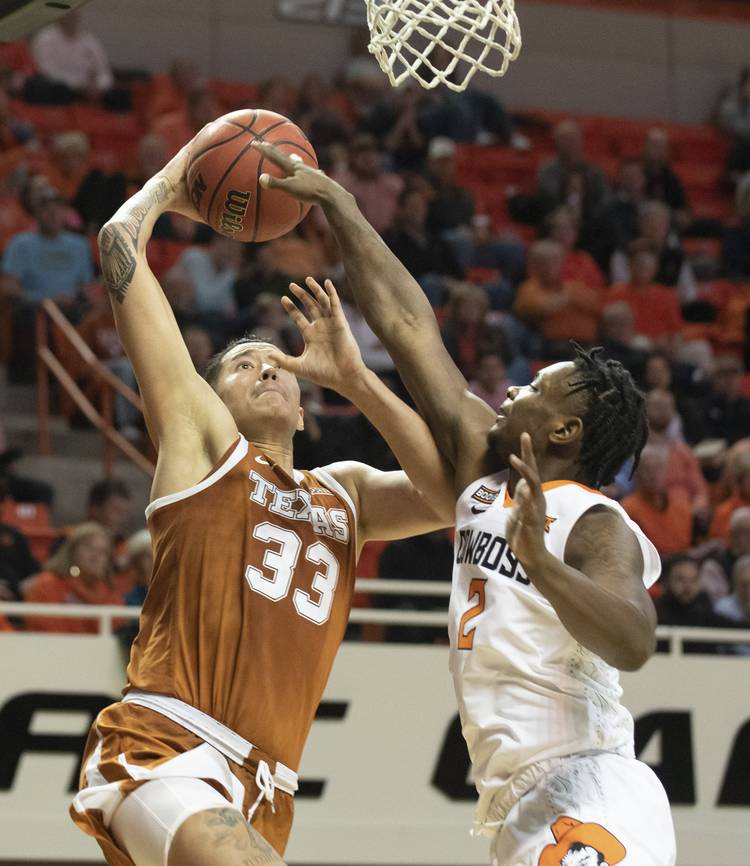 It would’ve been worth skipping a morning latte to see Jase Febres throw down a monstrous one-handed dunk Wednesday night at Gallagher-Iba Arena.

Asked to describe the sound, Courtney Ramey said, “It was like a BOOM!.”

Five $1 tacos sure sound appealing. But so was Kamaka Hepa’s pump-fake, dribble-drive and two-handed flush to open the second half against Oklahoma State. It was the thunderous highlight of his career-high night.

Amazon has pages and pages of stuff you can buy for $5. Or, you could’ve spent that money watching the Longhorns hit 15 3-pointers, block a season-high 11 shots and string together an impressive 76-64 win over the Cowboys.

Investing one’s emotional capital at this point may require more thought, though. Is Texas more like the inconsistent team that started 0-2 in league play? Or, is it just a team with more athletic wherewithal to overwhelm Kansas State and Oklahoma State, two groups with a combined 0-8 record in the Big 12.

Saturday’s home game against No. 6 Kansas may be a huge tell either way.

“I feel like these past two games have been a bigger stepping stone for us,” Febres said. “We’ve really just taken initiative when it comes to pressing the ball and being the aggressors.”

Oklahoma State (9-7, 0-4) saw this as its breakout moment. Students were back on campus from the holiday break, and school officials handed out a sheet of paper with instructions on how to cheer.

One of the nine bullet points read, “BE LOUD!” But you could hear a pin drop when Febres went skyward and threw down a hellacious dunk. It gave Texas a 37-29 lead with 16:26 remaining, and the entire visiting bench came roaring to life.

Smart and Ramey both said Febres had a similar dunk in practice. “Save that for the game,” Ramey told him. It was so vicious, Febres had to ice his wrist afterward. He finished with 13 points and was one of five Horns in double figures.

This was exactly the performance coaches and teammates have been trying to coax from the Alaskan.

Hepa was known as an excellent long-range shooter in high school. Smart put him in the starting lineup the last five games to give Hepa more run. But the 6-foot-9 forward was constantly passing up open shots, even doing it again Wednesday.

“I had to get on him earlier in the game because he was passing up looks,” Febres said. “He said, ‘I’m looking for the shooter.’ I’m telling him, ‘Dude, you’re a shooter. What are you talking about?’”

That dunk off a baseline drive triggered must’ve triggered something. Hepa hit three 3-pointers, went 6-for-10 overall and finished with a career-high 15 points in 31 minutes.

“The thing about Kamaka is that he brings a level of passion and spirit to our team that is very unique, and he only cares about one thing,” Smart said. “He had a career high tonight, but he could care less. He just wants Texas to win.”

Ramey simply took over down the stretch. He showed quick hands to get two blocks, the second coming with 7:26 left as OSU was gathering steam. He hit a terrific off-balance shot in the lane and later buried a 3-pointer giving Texas a 67-55 lead.

After Ramey’s long shot, Oklahoma State coach Mike Boynton called timeout, and those same OSU students were just exasperated. “Why do we suck?!,” one student said.

Ramey finished with 14 points, nine rebounds and six assists. He would’ve been closer to just the second triple-double in UT history if others’ shots had fallen. Still, the Horns shot 48.2% for the game, well over their season average of 43.8%.

Of course, Ramey said, he was frustrated about getting benched.

“I talked to my dad and he said there’s only two approaches you can take,” Ramey said. “You can take the child approach or the man approach. The man approach was to be there for my team and do whatever I can to help us win.”

Not bad entertainment for $5 bucks, either.

“I feel like we’re kind of gaining that momentum,” Hepa said, “and we’re going to carry that over to the rest of conference play.”