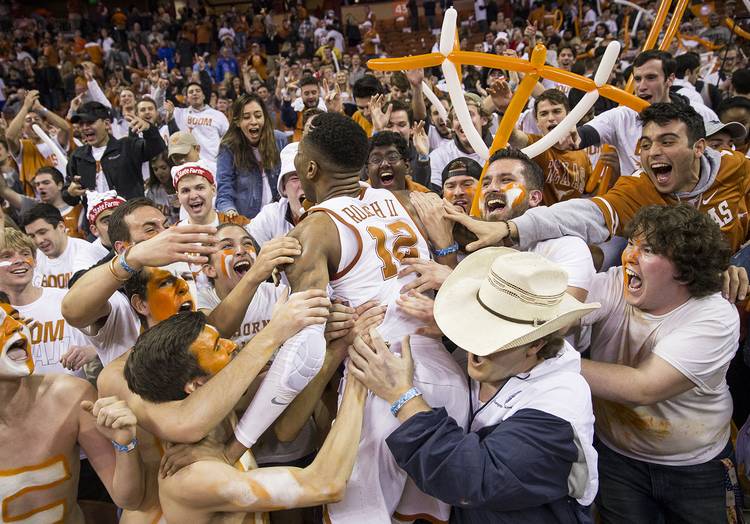 Any Texas fan who needed a burnt-orange adrenaline shot should’ve spent the day at the Erwin Center. Such is the motivational, healing elixir of Texas-Oklahoma.

About 3,000 fans turned out early Saturday morning for ESPN’s “College GameDay” broadcast. “First of all, the turnout at ‘GameDay’ was phenomenal,” said UT coach Shaka Smart, who thanked all the administrators who made it a success.

Around midday, women’s coach Karen Aston guided her team to an easy win over TCU. As she slipped out of the media room, Aston simply couldn’t help herself. “I can finish with OU sucks,” she said.

Just after 5 p.m., a near-capacity crowd of 15,533 witnessed a Texas-OU clash that was supposed to be dominated by Trae Young. Instead, it was the Longhorns’ star freshman that stole the show in an 79-74 upset over the 12th-ranked Sooners.

Matt Coleman, who shouldered the blame for last Wednesday’s loss at Texas Tech, was sensational. He tallied up a career-high 22 points and led the second-half charge as the Horns (15-8, 5-5 Big 12) erased a 10-point deficit.

Young still had a big day. OU’s superstar had 19 points and 14 assists. But he was 7 for 22 (31.8 percent) from the floor for his third-worst shooting day of the season. Young was rushed at times as the Horns ran through ball screens; he made only 2 of 14 3-point shots. But it was Coleman who led a 12-2 run that tied the game and a 22-8 run that finished things off.

“It’s what you come to college for,” Coleman said. “Now that we get a chance to be a part of something so great, the feeling is surreal. I can only thank God for that.”

Said Young, “I don’t think I got worn down. I just don’t think that we kept the momentum on our side.”

Texas students badly wanted to rush the floor. Students scurried down the aisles as the final seconds melted away. Big 12 commissioner Bob Bowlsby was in attendance. He’s already hit Texas Tech with a public reprimand and $25,000 fine for a court-storming incident.

UT security personnel blocked the aisles better than anything Mo Bamba’s swatted away this season.

“The reality in today’s game, it’s about player safety,” athletic director Chris Del Conte said. “When you’ve been there before and you’re the University of Texas, you win with class and you move on. It was a great game. There was no need to rush the court.”

The most appreciative fan watched it all in Houston. Andrew Jones was the focal point of ESPN’s broadcast for his battle with leukemia. The Texas guard’s exploits were shown on the video board during the game along with a message to contribute to a fund established for his family.

Mack Brown was honored at halftime for his upcoming induction into the College Football Hall of Fame. He peeled off a UT pullover to reveal a white “AJ1” shirt given to all fans who came earlier that morning. “We’re praying for him,” Brown said. “We’re pulling for him to have a full and speedy recovery.”

Around that time, Jones posted his first tweet since his diagnosis was made public on Jan. 10. “I would like to thank everyone for all the support and love. I’m doing a lot better and still fighting. #hookem #boom,” Jones tweeted.

Oh, and one other thing. “BeatOU,” he tweeted minutes later.

The Longhorns needed Jones last season. He drilled a rainbow 3-pointer with 1.8 seconds left to beat the Sooners in Austin. This time around, the task fell to Coleman, Bamba, Kerwin Roach II and Dylan Osetkowski.

Somebody needed to step forward after OU took a 50-43 lead. Suddenly, Coleman flashed the confidence only Smart has seen at times. He dribbled between his legs, shook his defender, drilled a 3-pointer and went down the court waving his arms, urging the crowd for more noise.

Coleman followed by blowing through OU’s defense and missing a two-handed dunk. The Sooners (16-6, 6-4) went the other way and scored. But Coleman responded with a 19-footer from the corner, and Texas had momentum. Roach scored, and then Coleman scored again and it was tied 52-52.

“I would say that was the turning point of the second half,” Coleman said. “We need something, a block, a steal. We found something and just ran with it.”

Texas made 13 consecutive free throws, a majority coming on a 13-0 run that helped the Horns grab a 70-66 lead. It was a far cry from last Wednesday in Lubbock when UT missed 13 total.

“Makes a big difference,” Smart said. “The scoreboard moves every time one of those goes in.”

Texas closed with authority. Eric Davis Jr. threw a long alley-oop pass to Bamba, who flushed it home and drove fans wild. Those eight recruits Smart had in attendance, not to mention a bevy of football recruits, probably enjoyed the atmosphere, too.

“It was really nice,” Bamba said of the entire day. “This is a once-in-a-lifetime opportunity, and we got up there and we capitalized. You’ve got to be happy for guys.”