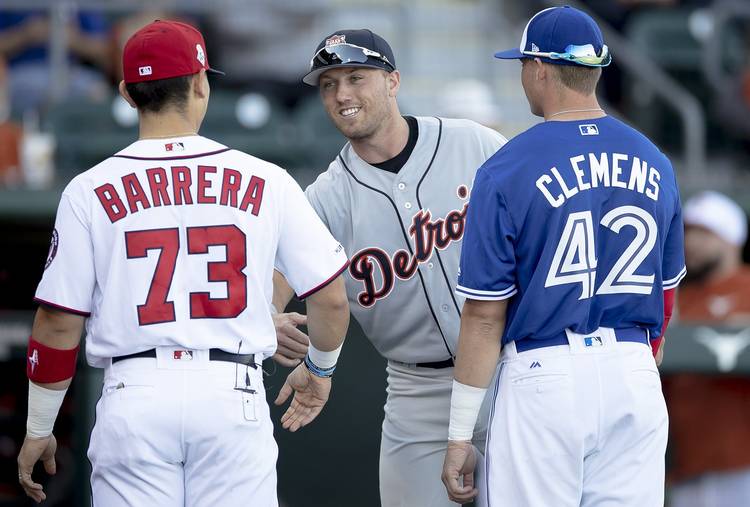 Last season, Texas was represented in the major leagues by a half-dozen of its former baseball players.

Mark Payton was not among those Texas Exes in the majors. An outfielder, Payton instead hit .334 with 30 homers over 118 games with Oakland’s Triple-A affiliate in Las Vegas. Since 2017, Payton has played in 260 Triple-A games in the farm systems belonging to Oakland and the New York Yankees.

This spring, Payton has his best shot at making a major league roster. Payton was acquired by Cincinnati in the Rule 5 Draft in December. Due to where the 28-year-old Payton was selected, the Reds must keep him on their 26-man roster for the entire 2020 season or he will be offered back to Oakland.

“We think, given his level of success on the Triple-A level, he’s ready to ultimately compete for that type of role on our big league club,” Rob Coughlin, the Reds’ pro scouting director, told the Cincinnati Enquirer.

Payton was among the professionals who appeared at Texas’ alumni game on Saturday. He told reporters that while an extended stay in Triple-A had been frustrating, he was ready for this upcoming opportunity. The Reds currently have 10 outfielders on their 40-man roster.

“They took a chance so I’ve got to go out and play good in spring training and earn the spot that they gave me on their roster,” Payton said.

Payton was a three-time all-conference honoree at Texas who twice led the Longhorns to the College World Series. Payton reached base safely in 101 consecutive games between the 2013-14 seasons and that remains an NCAA record. He was taken by the Yankees in the seventh round of the 2014 MLB Draft.

Catching on: Former Texas catcher Tres Barrera made his MLB debut during the 2019 season. And since he was a member of the Washington Nationals, Barrera will receive a World Series ring as a welcome gift.

Barrera appeared in two late-season games for the Nationals. He wasn’t active for any of the team’s postseason contests.

“I was extremely grateful for the organization for letting me be around in the playoffs,” Barrera said. “I wasn’t active, but I gained a lot of knowledge of what playoff baseball’s all about, what winning’s all about (from) a great group of veteran guys.”

Barrera said he wants to be a contributor this upcoming season and added that last year’s postseason experience “sparked a little fire from within.” Barrera is joined on the Nationals’ 40-man roster by veteran catchers Yan Gomes and Kurt Suzuki. Raudy Read, who has 22 at-bats in his career, is also on the 40-man roster.

Kingham started in right field for the alumni team. He went hitless in two at-bats but did score the seven-inning scrimmage’s only run on a sacrifice flyout.

From 2016-18, Kingham threw 230 1/3 innings for the Longhorns. He did not record a single at-bat. When asked after the alumni game if Kingham had been underutilized while on the 40 Acres, Pierce wryly said that “no we didn’t.”

A 12th-round pick by Atlanta in 2018, Kingham went 7-12 with a 3.52 ERA for three of the Braves’ affiliates last season. At UFCU Disch-Falk Field on Saturday, Kingham said he hopes to begin this year in Double-A.