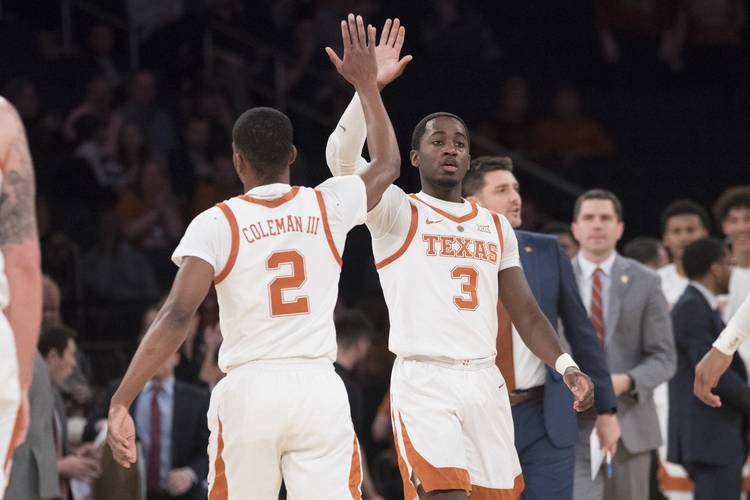 Basketball scheduling is a painstaking task best handled by gluttons for punishment. The final product is subjective art. You like it or hate it.

A&M, you say? Yes, the Longhorns and Aggies will renew their basketball rivalry on Dec. 8 at Dickies Arena in Fort Worth, one day after the Big 12 and SEC football championship games.

Smart likes the idea of playing glamour games around the state. He took the team to Houston to play Arkansas in December 2016, for example. Last season, the Horns and Hogs played in El Paso.

“That A&M game, we decided it’s a great opportunity to play up there,” Smart said. “Definitely I think the game will be really good for college basketball fans in the state of Texas.”

But look closer. None of the opponents mentioned are coming to the Erwin Center. All will be played elsewhere, in far-flung places like West Lafayette, Ind., New York or Providence, R.I.

As of now, there is no signature home game in November or December that fans can circle on the calendar and build a full day around. No Michigan, Michigan State, Connecticut or North Carolina, like in previous seasons.

“We want people to come see us,” Smart said, emphasizing the final word. “We’re really excited about the core group we have coming back. We have some really eager, talented, young guys that we’re working to integrate into what we do, including one right here from Austin.

“We’re excited about this year’s team,” the coach added. “Obviously the schedule is really important, but ultimately you want people to come see Texas.”

Texas will open the season at home against Northern Colorado on Nov. 5. UT will then play two lower-level opponents on Nov. 12 and Nov. 15 as part of the Empire Classic tournament before going to New York to play two games at Madison Square Garden.

The only remaining non-conference home game will be Jan. 25 against an as-yet-unknown foe in the Big 12/SEC Challenge. Multiple sources said Tuesday the two leagues have yet to finalize the full 10-game field. Will it be blue-blood Kentucky? Defending league champ LSU? Auburn? Tennessee?

The full Big 12 schedule, filling out the remaining 18 blanks on UT’s dance card, will be released later this summer.

So how did Texas wind up with so many good road games and so few at home? It’s a multi-layered issue that only schedule designers can appreciate.

First, Texas must account for two games — the SEC challenge opponent and the newly-created Big 12/Big East challenge foe. Teams are supposed to play one of those at home and the other on the road. So this season for UT, that’s an unnamed SEC team at home and Providence on the road (Dec. 21). Next season, it’s likely to be flip-flopped (SEC opponent on the road, Big East opponent at home).

Texas had to travel to play Purdue as part of a home-and-home contract agreement that began last season. The Horns beat the Big Ten-based Boilermakers 72-68 at the Erwin Center on Dec. 9.

Smart said he made a conscious decision to give up another home game to play A&M, a SEC school. It’s unclear whether Smart and new A&M coach Buzz Williams will make it an annual occurrence. Smart said he will likely broach that topic with Williams this summer.

The New York trip is a chance to play high-quality teams at Madison Square Garden, the same location the Horns won the NIT championship last April. For the 2020-21 season, Texas will play in the Maui Invitational for its big non-conference tournament trip.

Then, UT director of basketball operations Cody Hatt fills in the blanks, getting opponents where he can.

“In terms of our non-league schedule, the big home game happens to be at the end of January,” Smart said. “On our schedule for NCAA Tournament purposes, it counts all the same.”

It’s a rather entertaining schedule, to be sure, provided Texas fans can make it to all these road games. As for those who can only attend the home games, Kansas and Oklahoma will come calling eventually. Season tickets start at $99.