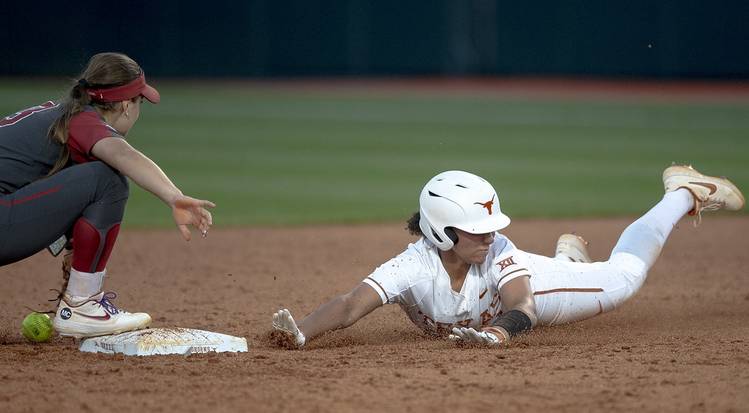 As the ball descended back down high above the grass just beyond third base, Reagan Hathaway stopped looking up. She didn’t look back. She only ran.

The Texas left fielder rounded third and was only a few feet away from home plate by the time the ball missed the glove of Louisiana’s Alissa Dalton and bounced into the dirt.

Ultimately, that rare infield double off the bat of Shannon Rhodes proved to be what the Longhorns needed, taking a 2-1 nightcap to split the doubleheader against the 10th-ranked Ragin’ Cajuns (12-4). Louisiana took the first game 3-2.

“It’s always been a team rule where if you hit a ball sky high — especially with elements like the wind — (you) run it out,” Rhodes said. “You never know what could happen.”

Heavy winds at McCombs Field that reached 15 mph were blowing toward home plate and were a factor in both games. Infielders and outfielders alike, regardless of jersey color, struggled at times with routine catches and chasing down fly balls. Having already played the first game in those conditions, Hathaway and Rhodes both ran through the play, giving Texas (16-2) the go-ahead run in the fifth inning.

“You have to make those split-second decisions,” UT coach Mike White said.

Before Rhodes’ RBI double, Texas had recorded just one run — a RBI single from Colleen Sullivan that scored Lauren Burke in the second inning. Sullivan, the catcher, and Burke, playing first base, both had two hits to lead the team.

Starting pitcher Shea O’Leary secured her fourth victory of the season, striking out three and allowing four hits and one run. The sophomore pitched all but the final out, as Miranda Elish relieved her.

The Longhorns had only 32 minutes between the final pitch of their opening loss and the start of the second game. “Barely enough time to grab a sandwich,” White said.

“You’ve got to bounce back quickly,”  he added, “but sometimes in the postseason, that happens too. So you’ve just got to put it aside and look at some of the mistakes we made. I thought that our discipline at the plate was better the second game.”

The Longhorns strung together eight hits in the second game, after six hits in the opener.

Texas leaves on Wednesday for Los Angeles to face No. 1-ranked UCLA on Thursday, followed by a weekend trip to nearby Fullerton, Calif. for the Judi Garman Classic which also will have No. 2 Washington and No. 13 Michigan in the field.

“Everybody’s going to be scratching and fighting nowadays,” said Rhodes, who scored both of Texas’ runs in the first game. “You’re not going to see very many run-rules. It’s always going to be a low-scoring game, so I think this is great to prepare us for what’s to come.”