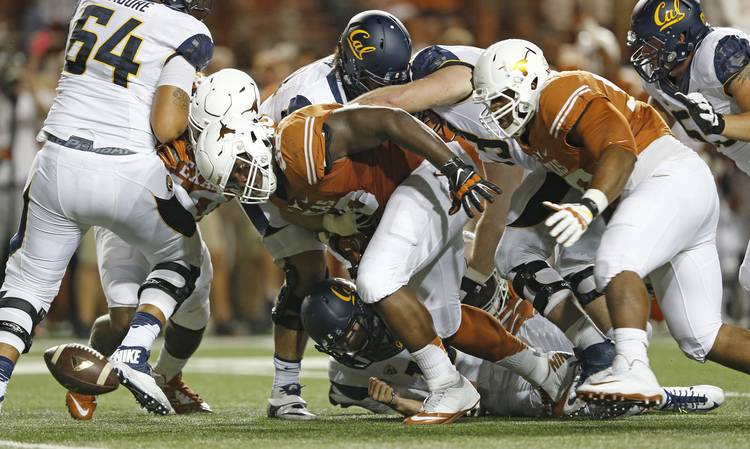 WOULD KRIS BOYD CONTINUE TO MAKE AN IMPACT?

No. The freshman corner produced big plays against Notre Dame and Rice, but was mostly silent against Cal. How quiet was he? Boyd didn’t figure into the final defensive stat sheet at all. It was Kevin Vaccaro, not Boyd, who was the star of the secondary.

DID THE RUNNING GAME FINALLY GET GOING?

Statistically, yes. But in reality, not really. The Longhorns finished with 286 yards as a team, averaging 5.5 yards a carry. But keep in mind that 163 of those 286 yards came from Jerrod Heard (24-163-3). No tailback had more than 50 yards — D’Onta Foreman had nine carries for 47 yards, Johnathan Gray had 46 yards on 11 carries and Chris Warren III had 24 yards on five carries. Gray scored twice and Foreman once.

DID CAL PUNT TO DAJE JOHNSON?

No. Literally. Cal didn’t allow Texas a single punt return. The Bears didn’t want Johnson, who scored on an 85-yard punt return against Rice and set up another touchdown with a 31-yard return, returning kicks either. Gray was kicked to twice and Andrew Beck returned a squib kick. Johnson, of course, did his damage as a receiver — five catches for 145 yards.

DID THE DEFENSIVE LINE SHOW UP?

Yes. For what it’s worth, this was the line’s best showing of the young season. Shiro Davis, who had been largely non-existent through the first two games, had a sack, forced a fumble and had two tackles for loss. Poona Ford had a tackle for loss, as did Hassan Ridgeway. Cal still had success attacking the middle of the Texas defense, however.