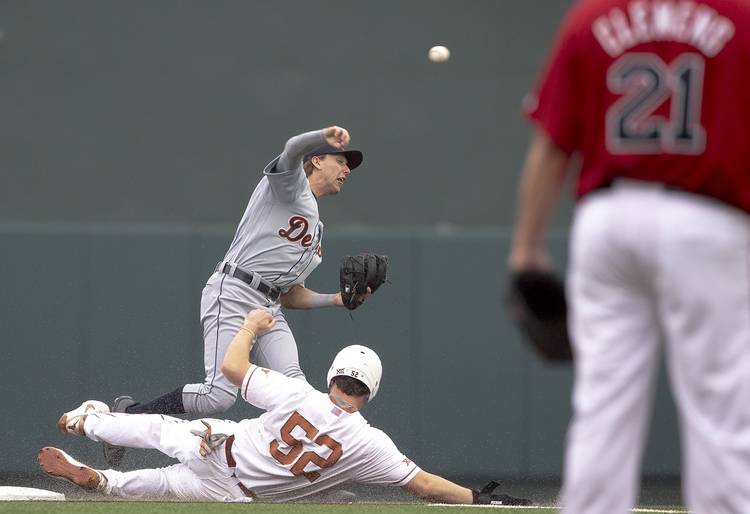 After battling both teammates and alumni on Saturday, the eyes of Texas can now shift to the opponents on this season’s schedule.

Texas scored a 7-4 win in the baseball program’s annual alumni game at UFCU Disch-Falk Field. The alumni team started a handful of ex-Longhorns before the showcase turned into an intrasquad scrimmage. The alumni game will be the last public appearance for UT before the 2019 season begins on Feb. 15.

Texas, which reached the 2018 College World Series, will start this season with four games at the University of Louisiana at Lafayette and Rice. Purdue is then set to arrive in Austin on Feb. 22 for the opener of a four-game series.

Advertisement
“I think the younger guys see that as a team we’re getting better day-by-day,” sophomore pitcher Bryce Elder said. “These next two weeks will show how ready we are. Hopefully by two Fridays from now, we’ll be ready to go.”

A stable of sophomores stood out during Saturday’s scrimmage. Elder threw for 3 2/3 innings and struck out four of the last five batters he faced. Three days after he was placed on the Big 12’s preseason team, designated hitter Zach Zubia doubled twice.  Sam Bertelson crushed a two-run homer.

After the game, UT coach David Pierce said that Kennedy has “been coming.” Senior Tate Shaw could move from a crowded outfield to first base in an effort to keep Kennedy in the line-up.

“We have a lot of talented young kids,” Elder said. “The young guys, they’re going to have to step up for us to make it very far. I think they will.”

Saturday’s scrimmage featured plenty of pomp and circumstance. Before the game, a bust of former Texas coach Augie Garrido was unveiled outside the stadium. Nine ex-Longhorns then made appearances over the scrimmage’s first three innings.

With Kacy and Kody Clemens returning to first and second base at UFCU Disch-Falk Field, the alumni team started Roger Clemens on the mound. A seven-time Cy Young Award winner, Clemens is one of six players to have had his number retired at Texas. Kacy Clemens was UT’s top offensive threat in 2017, and Kody Clemens earned All-American honors last year.

Wearing a Boston Red Sox jersey, the 56-year-old Clemens threw 33 pitches to seven batters in the opening inning. Clemens struck out Shaw with a splitter that was clocked at 80 miles-per-hour. He also allowed two hits and two walks. The current crop of Longhorns scored three runs against Clemens, the last of which was tallied when Kacy couldn’t corral an errant throw from his younger brother.

Kacy and Kody Clemens began pestering their dad about playing in the alumni game when Kody was drafted last year by the Detroit Tigers. Roger Clemens regularly throws batting practice to his sons during the off-season. He, however, doesn’t plan on playing again.

“He told us it’s his last (game),” said Kacy Clemens, who played for two of Toronto’s Single-A teams last year. “No matter what, he ain’t putting the spikes back on after this.”