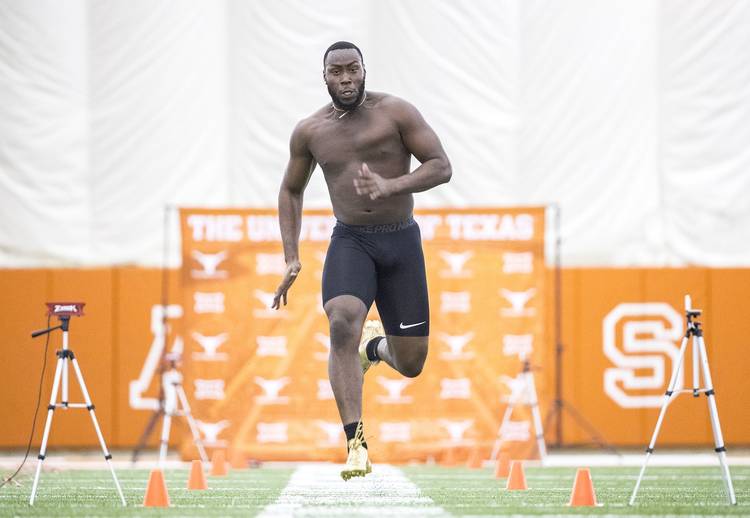 Never, ever forget, the NFL is a business.

“I can tell you a story,” Malik Jefferson said. The Cincinnati Bengals linebacker was one of a large number of former Longhorns who assembled Wednesday to watch Texas pro timing day.

“I had a guy come in for a week, basically replace me for a week,” Jefferson said. “The next week, he was already cut. He’d already bought a house and everything just to play for one game.”

Jefferson, a third-round pick last year who battled a toe injury his rookie season, just shook his head and laughed. “The nature of the business is just crazy,” he said.

Charles Omenihu, the Big 12’s defensive lineman of the year, understands the NFL’s poking and prodding is all part of the process. He was one of 18 Longhorns that went through all the standard sweaty fare for scouts representing all 32 teams.

Omenihu bulked up to 280 pounds for the NFL scouting combine in late February to show teams he could play an interior position. He’d slimmed down to 265 by Wednesday.

“I play fast on film. I’m explosive on film. Film is what you’re judged on, honestly,” Omenihu said. “We don’t play football in our underwear and shorts, you feel me?”

For the second straight year, a Texas defensive linemen will be a storyline of the NFL draft. Last year, Poona Ford was named the league’s defensive lineman of the year. But NFL scouts thought the 5-11 meanie was too short. No way he’ll make it, or so everyone said.

After his rookie season in Seattle, Pro Football Focus ranked Ford as one of the most underpaid players in the league. “Who’s that dude?,” one observer said as Ford walked around in a black warmup. Told it was Ford, he blurted out, “No way!”

Omenihu can relate to Ford’s draft story — undersized, undrafted and now unstoppable — but last year was a different situation. Omenihu’s agent David Mulugheta looks at UT’s highest possible draftee and said, “If you built a defensive end, you’d want him to look like Charles.”

So Omenihu has been following Mulugheta’s advice to the letter, from training in Santa Ana, Calif., to eating whatever is required to gain or lose weight. And he made sure to shake hands and speak with Pittsburgh Steelers general manager Kevin Colbert before leaving the practice bubble.

“I just want to be a Swiss Army knife,” Omenihu said. “That’s how you stay long in the league. If you do multiple things, you’ll be all right.”

Omenihu and defensive tackle Chris Nelson both worked extensively with an Indianapolis Colts coach. It was a good showcase for Nelson, too. He had 26 tackles last season and held the point of attack, rubbing his belly all along the way.

“When I came out here, I wasn’t nervous at all,” Nelson said. “It was like a walk in the park. At the end of the day, it’s football. I tell the guys all the time, if you practice hard, the game will be easy.”

You want to see somebody smile? Go ask Texas defensive line coach Oscar Giles about his two proteges, Ford and Omenihu, and the advertising potential they offer to future recruits.

“I’m just so excited for the kid, and it doesn’t matter if he goes second round, third round or fourth round,” Giles said of Omenihu. “Whoever gets this kid is going to get someone who’s going to work his butt off and contribute to the team.”

Of all the players that worked out Wednesday, Omenihu, cornerback Kris Boyd and linebacker Gary Johnson are considered the most attractive.

At the combine, Lil’Jordan Humphrey ran the 40-yard dash in 4.75 seconds, considered slow for high-level receivers. Humphrey said he in the “4.6s” on Wednesday, although two stopwatches had him in the low 4.7-second range on his first attempt and high 4.7s on the second.

Humphrey had a team-high 1,176 receiving yards and 12 rushing and receiving touchdowns. “They’ve been the ones to tell me don’t worry about the speed,” Humphrey said. “Football is football. Either you can play or you can’t. That’s what they’ve been telling me.”

Other players face serious inquiries about their health. Tight end Andrew Beck said scouts want to know about his surgically-repaired foot. He’s coming off a career-year with 281 receiving yards. “I haven’t had any issues,” Beck said. “I played a full season on it. I think I’ve kind of shown that’s not an issue.”

Scouts are quizzing running back Tre Watson about his knee. Watson said he stopped wearing a protective brace after the Sugar Bowl win over Georgia and feels stronger than ever.

“How many backs went (to the combine)? Twenty-seven? I want them all,” Watson said. “That’s how I’m coming. That’s how I think. Whoever you’ve got No. 1 on your draft board, put me on that team. Let me compete. I’m telling you man, I’m coming for it all.”

Others know they’ve got to be willing to do anything. Such is the business that is the NFL.

“What I’ve got word is I’ll probably be a utility guy. I have to do everything,” receiver Jerrod Heard said. “Special teams, I’m going to have to make my mark on there, definitely. But I’m eager to take that role on. I think I’m athletic enough to do anything they ask me to do.”

Heard was on punt return and kick return last season with Texas. How does one prepare for special teams in the NFL?

“I’ll interview Breckyn Hager on how to be crazy,” Heard said, “And I’ll get my mind right for next (Sunday).”