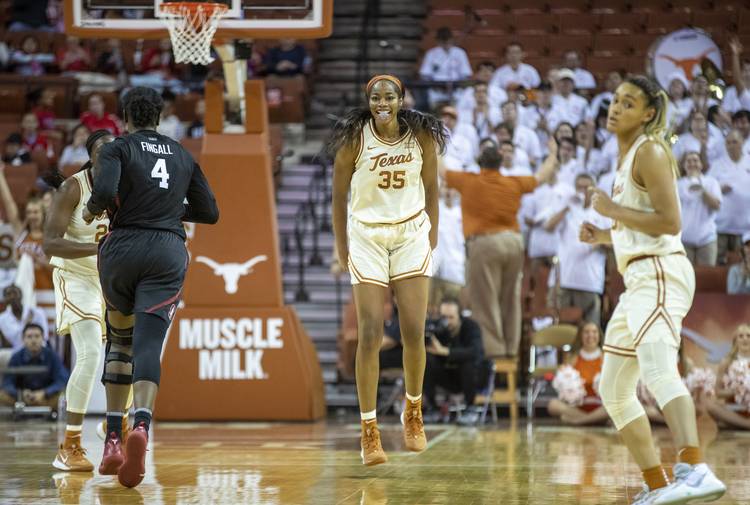 Texas center Charli Collier (35) celebrate a three-pointer in the fourth quarter against Stanford at the Erwin Center in Austin on Dec. 22, 2019. [RICARDO B. BRAZZIELL/AMERICAN-STATESMAN]

Through 20 games this season, the Texas women have hit 109 3-pointers. Statistically speaking, that’s not much. There are 190 teams out there — including six from the Big 12 — that have made more. Longhorns freshman Celeste Taylor has 21 of Texas’ threes while sophomore Charli Collier has made 20 of her 48 attempts.

Since she’s a 5-11 guard, Taylor’s range shouldn’t be a surprise. Collier, however, is six inches taller. The 6-5 forward attempted only 17 3-pointers last year, making just five.

Since the start of the 2010-11 season, a Longhorn has made at least 20 3-pointers in a season 31 times. Of those shooters, only Collier and Kathleen Nash, who made 73 3-pointers during the 2010-11 campaign and was 6-2, were taller than six feet.  Collier, who’s the tallest player on the UT roster, recently had a run of five straight games with a 3-pointer. She nailed all four of her tries last weekend at Oklahoma State. In the 69-64 upset of then-No. 1 Stanford on Dec. 22, she hit two big 3-pointers in the third quarter.

“It does a lot for our offense just to have a post player that can pop,” point guard Sug Sutton said. “You don’t have a lot of post players in the Big 12 that’s versatile like Charli. … It widens out our offense and it makes it harder for people to guard us.”

Collier began playing organized basketball when she was five. And ever since she first suited up for a team that her mother coached in the Barrett Station Basketball League in Crosby, Collier has spent a lot of time convincing others that she’s not your stereotypical big.

Collier will insist that you check out dribbling highlights from her youth on YouTube. She has a story to tell about a long 3-pointer she hit at the McDonald’s Texas Invitational in 2017. In the eighth grade, she told a Houston-area publication that “because of my height, they don’t expect you to dribble the ball, but I’m versatile and I can dribble and I can also shoot and play down low.”

So why is Collier, after making only five 3-pointers last season, having more success this year? Texas coach Karen Aston said Collier has a “pure stroke” and suggested that gaining a starting spot has led to more confidence. Collier credits her maturation and work in the gym.

“I had nothing to do with that (maturing), it just came over time,” Collier said. “It came with time knowing that freshman year is hard, yeah, but just realizing that, it will be different. Different times will come, like it will be a better time. just being mature and realizing that I’m older now and I have to be a bigger key for my team.”

Collier, of course, hasn’t just made an impact from behind the arc. She’s averaging 13.8 points per game. Her 11 double-doubles and 206 rebounds rank 10th and 16th nationally.

“They’re big, they’re strong, they’re fast,” Aston said. “We’re going to have to be as good as we can possibly be, I think, to compete with them.”

Will Collier find herself camping around the perimeter against Baylor, which has allowed 20 3-pointers over its last two games? Aston said that depends on Texas’ ever-changing game plan. Collier, for example, missed the only 3-pointer she tried on Tuesday but finished with 10 points at Oklahoma with an efficient 5-for-6 shooting performance.

Regardless of her role, Collier just wants you to know that she — and others blessed with height — can do it all. She points out that former UConn star Katie Lou Samuelson is 6-3 but smoothly handles the ball. Rhyne Howard, a 6-2 sophomore at Kentucky, ranks 13th in the country with 61 3-pointers.

“The game has evolved,” Collier said. “In the next couple of years, you’re going to have 6-3, 6-4 guards. You’re just going to have more versatility. It’s a thing.”

Does that mean that Collier might be Texas’ point guard next season? Sutton, after all, is a senior.