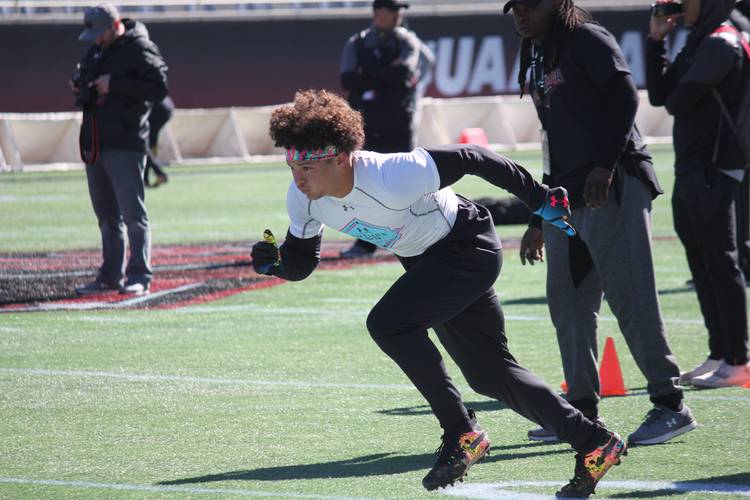 COLLEGE STATION — Not much went right for Jordan Whittington following his commitment to Texas on March 10. A lingering groin injury he suffered in September of his junior season finally forced surgery nine weeks ago. Following six weeks of rehab, the four-star wide receiver returned to field action Thursday at the Texas 7-on-7 state championships, helping Cuero reach the Division II championship bracket.

Whittington missed the routine. He’s a football player. The No. 3-ranked player on the 2019 Fabulous 55 will transition full-time to slot receiver once he gets to college, but he’s readying for another do-it-all season at Cuero High School. He’s a two-time District 15-4A-II MVP and was named first-team all-district as a wide receiver and a safety as a freshman.

“The injury lingered so I knew it was serious. I’ve been working out for two weeks,” he said Thursday in College Station. “I’m not in perfect shape but I’m not dying either.”

The 6-foot-1, 198-pounder could excel at the college level on either side of the ball. He’s recorded nine interceptions over the past two seasons, returning three for scores. He’s also added three punt return touchdowns and a kickoff return for a touchdown. Whittington recorded 73 receptions for 1,457 yards and 16 touchdowns as a junior, adding five rushing touchdowns.

“I take pride in being a football player. We all have a role and I try to do whatever my team needs to win,” he said. “We’re trying to win a state title. None of the other stuff matters.”

The short time away from football helped Whittington learn a valuable lesson young in life. It was the first time he missed an extended period due to injury. He’s a self-described workout junky who doesn’t enjoy being idle in the offseason.

“It is stressful because your mind and your body are used to working on perfecting your craft daily and then it’s gone. It is eye-opening,” Whittington said. “It showed me how much I love the game. I also know everybody else was working while I was injured. It’s time for me to catch up.”

Whittington will miss out on The Opening. It was a frustrating offseason as he missed camps with his peers and slipped down recruiting rankings because of his injury status. The same thing happened to Texas freshman BJ Foster before he returned from injury as a senior and moved back up the rankings. Still, Whittington knows where his allegiance lies.

“The Opening was a bummer because I dreamt about it since eighth grade,” said the future Longhorn. “I was invited but it wasn’t something I could risk getting injured in before my senior season.”

The Dotted Line: The Opening to host several of Texas’ top out-of-state targets