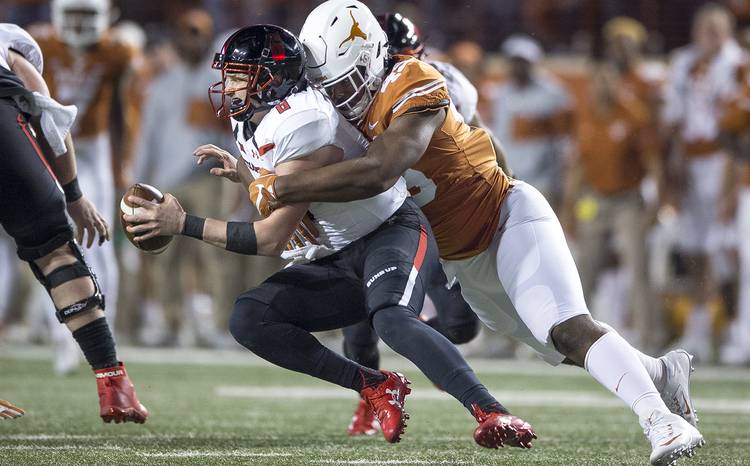 Every high school recruit wants to play immediately, but more often than not, they must wait their turn. Often times it works to their benefit.

Ta’Quon Graham’s journey at Texas is textbook in this regard.

He arrived as a celebrated freshman from Temple, ranked 26th on the American-Statesman’s Fabulous 55 list and had six tackles and a sack. But mostly, Graham watched and learned from Poona Ford, the Big 12’s defensive lineman of the year.

Then last season, Graham had 12 tackles and half a sack in a secondary role behind Charles Omenihu and Chris Nelson, two consistent seniors.

Now a junior, Graham looks physically imposing at 6 feet, 3 inches and weighing 300 pounds. His arms are longer than the law, from which few escape. The Longhorns need a second pass rusher opposite Roach. For Graham, his time is now.

“I’m not worried about having a breakout year at all,” Graham said after Sunday’s practice. “I’m worried about playing and winning games for my team and that’s about it. Because if I do my job and play the way my team expects me, the way my coaches expect me to play, the way everybody around me expects to play, I’ll be just fine and will have the year I want.”

Defensive coordinator Todd Orlando has already made it clear that he has high hopes for Graham this season.

“I expect to see a dynamic playmaker,” Orlando said in late July. “When you look at that guy in the weight room, it’s freakish some of the stuff he can do.”

Orlando said he and defensive line coach Oscar Giles can only do so much, though. “At some point, you’ve got walk out there and say, ‘You know what? I’m going to be great.’ That’s the next step,” Orlando said.

Orlando, being the no-spin assistant he is, didn’t say anything he hasn’t expressed to Graham internally.

It’s simply reality. Texas has Roach (94 tackles, five sacks) at one defensive end position, and Keondre Coburn at defensive tackle. For this defense to work, the unit must have a commanding presence on the opposite side or offensive coordinators can simply scheme to avoid one defensive end and block the other.

Having a defensive end who can squat more than 700 pounds, like Graham can, seems like a decent start.

“With Poona, I would say I probably learned from his demeanor,” Graham said. “He made plays, got up and acted like he’d been there before. Silent leadership. He leads by leadership and not by words.

“And Chris Nelson was a guy who would take you the side and coach you up in little areas here and there,” he added. “Charles is someone I could ask for what move I could do here or there. They all had different aspects that I learned from.”

Hard to tell if those veterans were taking financial advice from Graham, though.

When he was in high school, Graham always played with money in his socks. In 2015, Temple played Manor and Graham accidentally forgot that he’d stuffed a $5 bill in his sock for safekeeping. So Graham just kept socking it away as the games progressed.

Orlando would be pleased if Graham just socked quarterbacks this season. Same goes for Roach and Coburn.