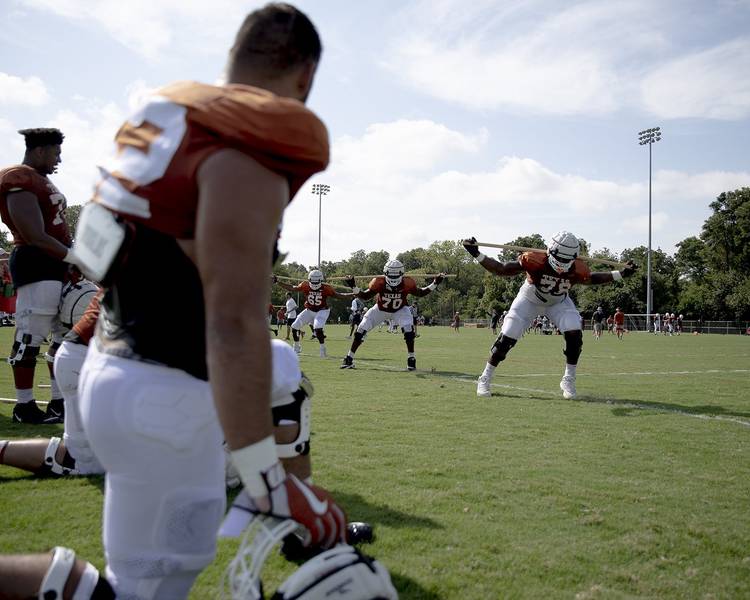 “It’s one thing being in practice and things are in a little bit of a controlled environment,” Orlando said after Saturday’s practice at Whitaker Fields. He was hot, sweaty and ready for two more hours of work, if coach Tom Herman wanted.

“But when we get into a scrimmage where it’s going to be 60 plays probably for each group,” Orlando said, “you’re going to get a good barometer of who can do it without us being out there. It’s going to be huge.”

The scrimmage will closed to the public and reporters, but Herman told the Longhorns to treat Sunday “as a game day in every aspect.” Herman is scheduled to meet with reporters afterward, and then players will have a fan appreciation event Sunday afternoon.

Orlando is narrowing down his defensive rankings and determining his top 11 players. There are still questions about who could win starting jobs at corner. Other position players are trying to make an impression and earn spots as backups.

Orlando and the coaches rank every defensive player. It would appear the secondary is the deepest unit. Orlando has expressed an openness to using creative, even perhaps nontraditional lineups to get the 11 best players on the field.

“If we lose too much mass, like if we’re getting knocked around and things like that, then we won’t sacrifice that,” Orlando said. “But if you give us somebody that has to play in space, outside the core of the formation, outside of guards and tackles and all that stuff, if you’re a playmaker, if you’re really, really fast, we’ll find you a home.”

Johnson out again: Running back Kirk Johnson is out six weeks with a sprained sternoclavicular joint after falling awkwardly on his shoulder Wednesday. That was the first day in full pads.

The fifth-year senior simply cannot catch a break. Johnson has suffered all manner of lower body injuries during his time at UT. He has eight career carries for 44 yards, and all of those came during the 2015 season.

“He’s got to know all the different nuances and protections, and he’s done a good job,” Beck said. “He needs to continue to grow in those areas.”

“This is that time where freshmen, it’s like their brain turned to oatmeal,” Beck said. “He’ll be a contributor for us as well.”

All freshmen must wear a red stripe across the top of their helmet initially, so it becomes easy to see on film who’s a newcomer. It’s like pledging a fraternity, to a degree. When the player has done enough, the coaches remove the red stripe.

Meet the Horns Day: Sunday’s “Meet the Horns” fan appreciation event is scheduled from 1:30 to 3 p.m. at Royal-Memorial Stadium. All fans will receive a team poster and can get autographs from everyone on the roster. Individual photos or “selfies” with players will not be allowed.

Parking is free from 8 a.m. to 4 p.m. in the Manor garage, on the east side of Royal-Memorial Stadium.