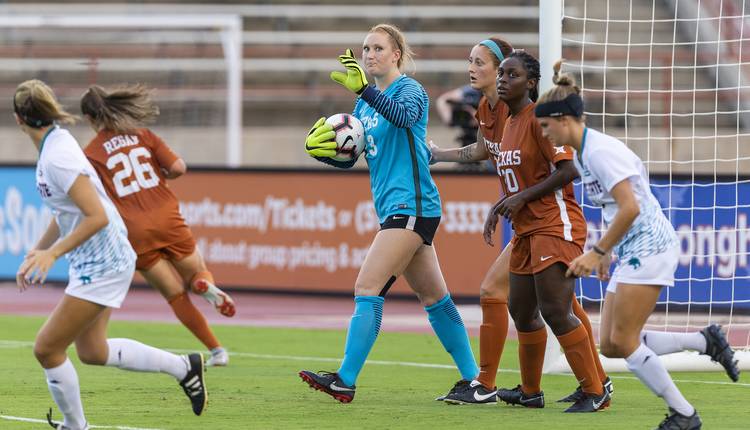 Instead of enjoying a Sunday off, Texas will be stewing over a 2-0 loss to Oklahoma State that dropped the Longhorns to third in the Big 12 standings.

“I wish we played Sunday, to be honest,” Texas coach Angela Kelly said. “It’s a long week to sit on that.”

Texas had a chance to retake first place, but conceded early and struggled to create opportunities against a No. 18-ranked Cowgirls squad that played with five defenders and at times kept 10 players behind the ball. Of the 13 shots Texas took, only four were on goal and even fewer came from within the penalty area.

“We just gave the ball away too often,” Kelly said. “Their formation sits back and we just needed to connect more passes. Poor decision making at times. We had a good response in the beginning of the second half and created scoring opportunities. We needed to put one away.”

Grace Yochum scored in the 11th minute for Oklahoma State. She was first to react after Olyvia Dowell’s intended cross hit the crossbar and fell inside the 6-yard box. It was the first time Texas had conceded in the opening half since Sept. 15.

“It was really shocking, because that was really the first time they were in our end,” Texas senior forward Cyera Hintzen said.

Hintzen had the first shot on goal for Texas in the 47th minute, part of a surge after the break that was helped by Haley Berg, who played on the wing in the first half, shifting to the center of midfield.

Sydney Nobles had a close-range header in the 48th minute that she sent over the crossbar.

Julia Grosso returned from her trip to Japan, where she played for the Canada national team in a closed scrimmage against Japan on Monday. She played all 90 minutes for Texas in central midfield.

Oklahoma State forward Gabriella Coleman made it 2-0 in the 63rd minute when she stole the ball from Texas left back Mackenzie McFarland and hit a shot low and hard past goalkeeper Nicole Curry.

The Cowgirls had 11 shots, seven of which were on target.

“Our plan was to defend really well and we thought we could hit them on the break and we did,” Oklahoma State coach Colin Carmichael said.

The Dotted Line: Which programs are recruiting better than Texas in 2020?