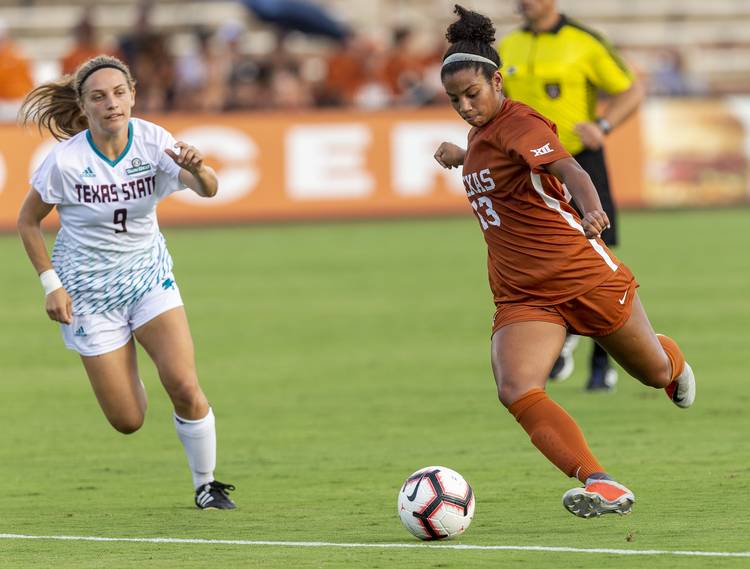 Texas fans, get to know your new favorite team in the National Women’s Soccer League.

After drafting forward Cyera Hintzen at No. 31 overall on Thursday, Utah Royals FC now has both former Longhorns in the league. Hintzen will join goalkeeper Abby Smith, who was the last UT player to be drafted in 2016.

Hintzen was a four-year star for Texas during a pivotal stretch that saw coach Angela Kelly’s program transform into a perennial NCAA tournament team. She finished her career tied for fourth all-time with 27 goals and 12 match winners.

The highly-touted recruit from Garland had 10 goals in both her sophomore and junior seasons. Her production dropped off slightly in 2019 after a head injury kept her out of three matches, and she had more help with the dynamic duo of Haley Berg and Julia Grosso, both of whom will be back for the Longhorns in 2020.

Hintzen had five goals and four assists as a senior, and she continued to deliver in big moments. She scored winning goals late against Gonzaga, Kansas and TCU.

The Royals were sixth in the nine-team NWSL in 2019, finishing four points outside the top four playoff places.

Smith, 26, who’s spending the offseason playing for the Western Sydney Wanderers in Australia, will be locked in a position battle with 2019 starter Nicole Barnhart, 38. Smith was drafted No. 27 overall in 2016 by the now-defunct Boston Breakers, at the time becoming the first Longhorn to be selected since the NWSL was launched in 2013.

Center back Atu Mshana, the other Texas player to declare for the 2020 NWSL College Draft, was not selected. The draft consisted of four rounds, for a total of 36 picks.