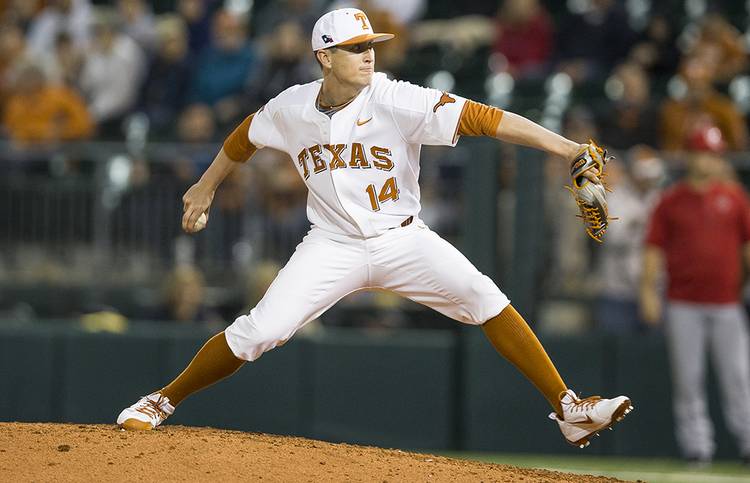 HOUSTON — Texas, which has been out of town since last Thursday, is heading back to Austin with three souvenir victories.

Texas produced 11 runs on 13 hits and Beau Ridgeway and Donny Diaz both had successful returns to the mound in an 11-4 win at Rice on Tuesday night at Reckling Park. With the rout, 23rd-ranked Texas (3-1) closed out its season-opening road trip to Louisiana and Houston on a high note.

Texas’ next 10 games will be played at UFCU Disch-Falk Field, starting Friday with a three-game series with Purdue.

“It’s been a long road trip, but its been fun,” Ridgeway said. “I feel like we’ve been gone for about two weeks. I’m excited to get back to the Disch and give our fans something to watch.”

Held hitless through the first two innings, Texas scored eight runs in the third and fourth frames. Five of UT’s 13 hits were extra-base knocks as Zach Zubia homered, Eric Kennedy tripled and both Ryan Reynolds and Michael McCann doubled. DJ Petrinsky also tripled in the five-run third, a hit that turned into a Little League homer when the Owls botched the relay throw.

The double-digit runs were UT’s first since it opened last year’s NCAA tournament with a 10-0 win over Texas Southern. The bigger story, though, was from a bullpen that sent its top three arms from 2018 to the minor leagues and promoted Bryce Elder to a starting role. Texas used four relievers against the Owls and Ridgeway, Diaz and Cole Quintanilla all had noteworthy outings.

Tuesday’s appearance was Ridgeway’s first since he worked 1 2/3 innings at Texas Tech on May 5, 2018. He saved 12 games two years ago as a sophomore, but he suffered through a lengthy slump and an 11.32 ERA in 2018.  He did not pitch during UT’s postseason run to the College World Series.

Called upon in the third inning with two outs and the bases loaded, Ridgeway struck out the first Owl he faced. The right-hander then retired the side during his next trip to the mound in the fourth. Rice eventually tagged him for four hits and three runs, but he was credited with the win after throwing 36 pitches over 1 2/3 innings.

“This was really big for me,” Ridgeway said. “Last year was obviously a struggle. It was just nice to finally get out here, kind of break the ice. Pretty good start to 2019.”

Quintanilla, who relieved Ridgeway, retired all five Owls he faced. Diaz allowed one hit in his two innings. Quintanilla and Diaz both missed the 2018 season after having Tommy John surgery.

A redshirt freshman from Cedar Park, Quintanilla also threw 2 2/3 innings of shutout baseball at ULL this past Saturday. Diaz, who joined the Longhorns after spending three years at San Jacinto Junior College, made his UT debut on Tuesday. He said he felt a little stiff while warming up on a 40-degree night but adrenaline eventually took over.

“Cole looked very loose, looked very comfortable and let the ball go,”  UT coach David Pierce said. “Donny is just a great story right now. He’s been working for a year-and-a-half to get back on that mound.”

Around the bases:  Rice and new coach Matt Bragga dropped to 2-2. Texas fans last saw Bragga last June when his Tennessee Tech team pushed UT to three games in a super regional in Austin. …  Rice infielder Cade Edwards, who played for Pierce at Tulane in 2016, drove in a run against his old coach. … Zubia, a sophomore whose 11 homers ranked second on the team last year, went deep for the first time this season. … Texas freshman Ty Madden struck out four batters but allowed two hits and four walks over his first start, which lasted 2 2/3 innings.