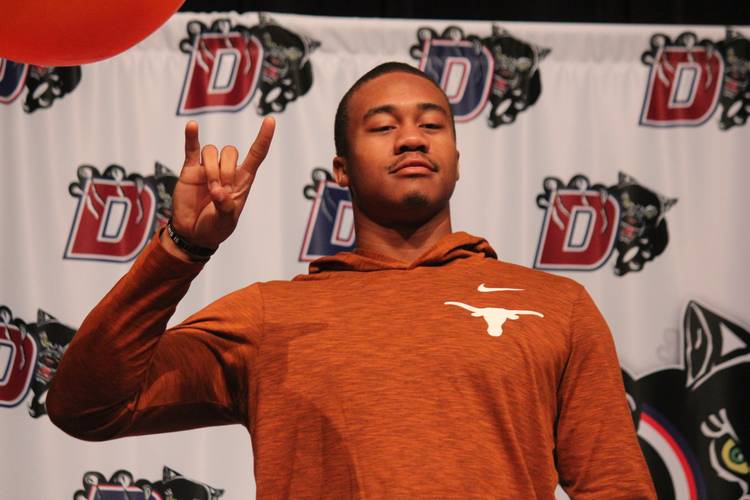 DALLAS — For the first time since Tom Herman took over late in the 2017 recruiting cycle, Texas signed more players from the Dallas-Fort Worth area than Huoston on Wednesday.

The Longhorns signed five DFW prospects and three from Houston. The early signing period ends Friday; Texas’ class ranks 10th in the country and first in the Big 12. In all, the Longhorns added 16 players. Eight of those plan to enroll early in January.

Nearly a third of the class hails from DFW, headlined by Duncanville’s Ja’Quinden Jackson, a four-star athlete who intends to start out as a quarterback.

“Dallas is very important,”Jackson said about recruiting the state. “We want to see more guys stay in the state instead of places like Oklahoma.”

It’s hard to argue against DFW as being the mecca of high school football in the most football-crazed state in the country. Houston is the only recruiting hotbed with an argument to make, and Herman — who came to Texas from the University of Houston and relied heavily on that area in his 2018 and 2019 classes — will never struggle to recruit that area.

But for the Longhorns to take the next step, they must compile a roster anchored by prospects from Houston and DFW. That’s the blueprint to a title.

Texas didn’t need to focus on DFW in Herman’s first two classes. Herman inherited a nearly full class in 2017 with only months to finish it off. The 2018 class was Houston heavy because so much of the talent in the class was in the Houston area, which worked perfectly for a coach who had already built strong ties in H-Town.

Two of the four offensive linemen Texas signed on Wednesday are from successful DFW programs. Southlake Carroll’s Andrej Karic and Jake Majors of Prosper represent high-upside linemen that UT can build around. Texas started four former three-star recruits and one four-star along the offensive line this season. The two four-star signees from DFW hope to make an impact. Majors will enroll early.

“Each town in DFW takes so much pride in their football team,” Major said. “It almost becomes its football team, especially when your program starts making a run in the playoffs. There are so many good teams and players here that we can’t let them get away to other schools when they can play for their own state.”

Jackson is a winner. Duncanville lost two games in three years with Jackson at quarterback. The 6-2, 219-pound dual-threat tore his ACL in last week’s state semifinals and won’t play Saturday in a rematch of last year’s Class 6A Division I championship game classic.

“It’s so hard to miss my final game as a senior,” Jackson said Wednesday. “I’ll be there for my teammates, and I trust them to close the deal.”

Jackson likened Texas’ offense under Herman to the one he’s already mastered in high school. He won’t compare himself to another quarterback, but he compares similarly in size and strength as current Longhorns starter Sam Ehlinger. Despite the changes on the coaching staff, Jackson said he stuck with Texas because of the family vibe and the open communication with the Longhorns.

“It is very important for Texas to recruit the best in DFW, not only because of the talent, but being able to start a pipeline that will prove to future stars from here that they can come to Austin and feel at home,” Majors said. “Talented players can’t be used at a university unless they feel comfortable, and that’s a major factor.”

Jaden Hullaby is a name rarely mentioned on the recruiting trail. The three-star from Mansfield Timberview played out of position as a senior, moving to quarterback for his team. The 6-2, 205-pound former running back plans to be a Swiss army knife for the Texas offense, lining up at various positions including H-back.

“In my opinion, Dallas has the best talent, so it is important to get more players from here,” Hullaby said. “Oklahoma has been doing that better lately, but it is time to shift the momentum. We already have a couple of guys in the 2021 class on board, so it’ll be big.”

The only defensive prospect from DFW to sign with the Longhorns was Highland Park edge rusher Prince Dorbah. He was one of 12 members of the 2020 Fabulous 55 to sign on Wednesday. The 6-2, 208-pound linebacker recorded more than 40 sacks in his career.

“I think guys like me and Ja’Quinden (Jackson) can help Texas do better in this area because as recruits, you hang out with the team on visits. We’ll be able to talk to those guys from the same places as us about life at Texas,” Dorbah said. “We know it won’t be a Dallas-only team. We need those guys from the rest of the state, just like they need us. It’s about doing this together for Texas.”

Herman will search out talent, no matter where it plays high school football. He signed 10 players from out of state in the 2019 class. For Texas to get back on track, it’ll take recruiting everywhere, but it can’t hurt to build a footprint at football factories up north like Duncanville and Southlake Carroll.

“”It will always be important but no more or less important than anywhere in the state. We did do a good job there this year. I think a lot of these guys see the progress that we’re making,” said Herman at his press conference on Wednesday afternoon. “DFW, since we got here, has been very much a priority. But to say that it’s any bigger than Houston or Central Texas or East Texas, that wouldn’t be exactly fair. But it’s an extreme priority and I’m glad we had some success up there.”

How many players from the DFW and Houston areas signed by Texas over the past five years: