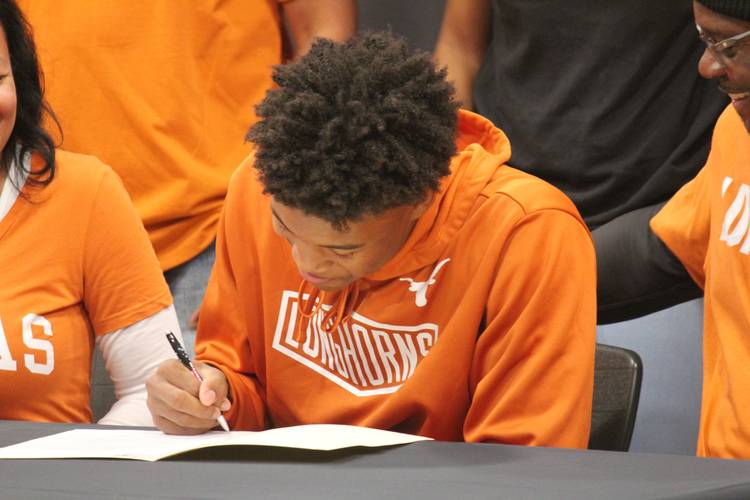 MELISSA — Tom Herman grew up in California and cut his teeth as a head coach in Houston, so it should come as no surprise that the first three classes that he’s orchestrated were heavy on H-Town and Cali talent.

Texas signed as many Californians (four) as it has prospects from Dallas-Fort Worth in the past two classes.

Plano East safety Tyler Owens and Melissa wide receiver Kennedy Lewis signed today and are the Longhorns’ only DFW products in the 2019 cycle. Texas landed offensive lineman Rafiti Ghirmai out of Frisco Wakeland and Byron Hobbs of Fort Worth Eastern Hills in 2018, the first real UT class for Herman after taking over months before national signing day of the 2017 class.

Owens shot up recruiting boards as a senior. The 6-2, 202-pound four-star safety didn’t attend the elite camps in the offseason that recruiting sites put so much stock in these days. But his play on the field and an impressive performance at a Texas camp this summer opened eyes and earned him a scholarship offer.

He’s the No. 33-ranked player on the American-Statesman’s Fabulous 55.

“It was all God’s plan,” Owens said Wednesday. “I was patient and knew my hard work and talent would pay off. This is truly a blessing and I can’t wait to get to work. I can’t lie and say I wasn’t frustrated at times during the recruiting process, but you have to take the good with the bad.”

Lewis was a late addition to the class. The 6-3 wide receiver committed on Tuesday afternoon and signed on Wednesday. The three-star is taller than the other three receivers that signed with Texas, perhaps allowing him a path to playing time on the outside. He was a first-team all-district selection as a junior and senior. Lewis was second-team all-district as a junior.

“I really like the coaching staff,” Lewis said Wednesday at his signing ceremony. “I talked to coach (Drew) Mehringer every day, and it was just as much about life as it was about football. Throughout the process, I looked for schools that were better than Texas, and I just couldn’t one.”

Texas can’t rely on Houston and out-of-state talent to reach the heights planned by Herman. Texas must recruit the DFW area with better success as the staff continues to build relationships with the high school coaching staffs and players from north Texas.

“There should be more Dallas guys coming up, and I definitely see them coming up here to get more athletes,” Lewis said.

The 2018 class was loaded with Houston talent, which allowed Herman to focus on his home turf.

The 2019 class was a down year in the state and it forced Herman to expand his net and fish 10 commitments from outside the Lone Star State.

The 2020 class will be another different story. Talent is cyclical, and the DFW area will be home to several of the state’s top recruits next year. Nine of those DFW-area players already hold UT offers, including a pair of four-star Duncanville prospects in Ja’Quinden Jackson, an athlete, and safety Chris Thompson Jr.

“Recruiting is about relationships and most of Herman’s closest ties are understandably in Houston or even California,” said Cedar Hill assistant coach D.J. Mann. “That staff knows Dallas is important and guys like Tim Beck and Stan Drayton know a bunch of people in this area. I’m guessing Texas does better up here with the current juniors.”

Texas inked the third-best class in the nation in 2018. It’s likely to close with a top 10 class in 2019. The playing field will be back to even in 2020 and the three-man battle royale between Herman, Texas A&M’s Jimbo Fisher and Oklahoma’s Lincoln Riley should be fun for years to come.

“The world is smaller with social media. A coach from Michigan, or wherever, can stay in constant contact with prospects without doing all the traveling,” said Melissa head coach and former SMU safety Seth Stinton. “The in-state schools still have the advantage because of our relationships with them as high school coaches. Coach Herman, and the other college coaches around us, allow us to come in and look at the program or talk or watch practice.

Herman proved in 2019 that he doesn’t care where players come from, and he shouldn’t. He’s paid millions of dollars to win football games and that takes the best talent the nation offers. Don’t expect Texas to stop exploring nationally for top prospects or for Houston to take a backseat to DFW.

The goal is for Texas to go anywhere in the state and win head-to-head battles with rivals like Oklahoma and Texas A&M. The truth is DFW is a hub of talent. The Longhorns need talent from that area to regain their position among the nation’s elite on the recruiting trail and on the football field.

“It does a coaching staff good to maintain relationships anywhere that houses a ton of talent and this area produces football players,” Stinton said. “The trajectory Texas is on speaks for itself and the players up here respect winning.”