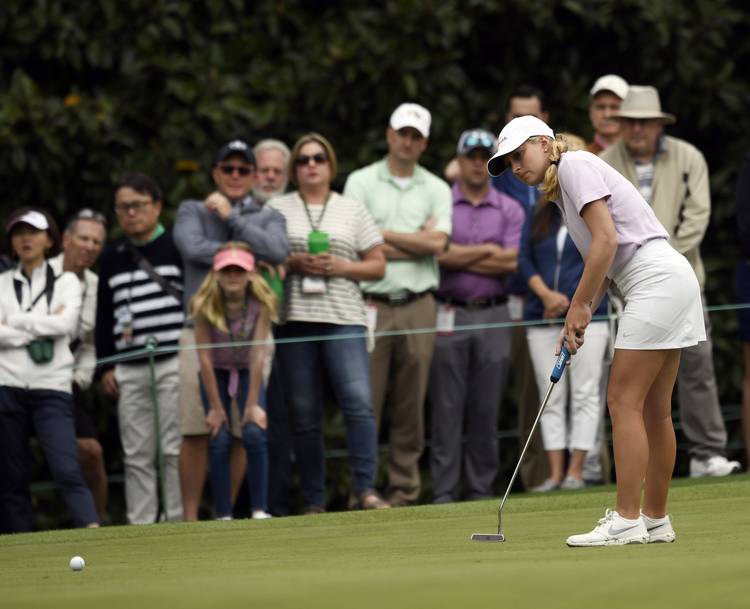 Kaitlyn Papp watches her putt on #7 during the final round of Augusta National Women's Amateur at Augusta National Golf Club, Saturday, April 6, 2019, in Augusta, Georgia. [ANDY NELSON/FOR THE AUGUSTA CHRONICLE]

AUGUSTA, Ga. — Kaitlyn Papp strolled around Augusta National on Saturday in the same manner whether she made a good shot or a bad one: calm, cool and collected.

Although the moment was large, Papp maintained her composure throughout as she has focused on doing her entire golf career.

“You just have to convince yourself to stay as calm possible,” the Texas sophomore said. “Not get too high or too low. I feel like I do it every tournament. If you try and stay even keel, it’s the best way to go about it.”

Papp finished the Augusta National Women’s Amateur in a tie for fifth with Zoe Campos. Papp shot 1-under-par 215 over the three-day tournament, which began at Champions Retreat. Papp’s teammate at UT, Agathe Laisne, finished in 29th after shooting 226, 10 over par.

“I think that’s a great finish for how high of a caliber field this was,” Papp said. “It was with the world’s best players, and some of the girls at the top are about to turn pro. They have their tour cards. To finish top five, I’m really proud of myself.”

The 20-year-old ended the final round at Augusta National shooting 2-over 74.

Papp said it was a surreal feeling to play at Augusta and that it didn’t really hit her until the 18th hole.

“I’ve never seen crowds this big besides watching a professional golf tournament on TV,” she said. “It was a big statement for all these people to come out and watch women’s amateur golf.”

Papp, who was born in North Carolina, has moved around all her life — from Okinawa, Japan, to settling in Austin for high school. Her father, Tony Papp, was an occupational therapist in the U.S. Navy.

Tony has been her caddie since she was a child. Kaitlyn’s mother, Julie, enjoys watching her husband and daughter’s strong bond on the course.

“It’s really neat,” Julie said. “Her and her dad have been through this journey together the whole time. He’s been on her bag the whole time. For them to share this is really special for both of them.”

“She’d come out there when it was raining, cold, fingers were numb, and she’d be out there hitting balls,” he said. “If I could’ve stood it, I would’ve gone with her. Sometimes it was a little too cold for me.”

Beck said he was really impressed seeing Papp’s swing at 9 and 10 years old with her small build.

“She just had so much clubhead speed and such a wide arc for someone her size,” Beck said. “It was amazing that she could catch on like that.”

The Women’s Amateur gave Papp an opportunity to be a role model this week in the spotlight. One fan watching her, 14-year-old Caroline Heath, said Papp is an inspiration. As a child, Papp gained her motivation to be a golfer from a similar experience.

“I think the turning point for her was when we lived in Camp Lejeune,” her mother said. “We went to this LPGA Tournament in Kingsmill (Virginia), and she looked around and said, ‘This is what I want to do. I want to compete in tournaments.’ That was all the beginning. She was 9 years old.”